I had long planned on blog-walking the Brinkerhoff Avenue Landmark District, where the charm is off the charts. But it’s only a couple of blocks, so I decided to cover the crook of Highway 101, with De La Guerra and Chapala as the other edges of the wedge. It’s sort of the Lower West of downtown. Because I have a tendency to swap opposites, however, all the photo files in this post actually call it Lower East. I used to worry about mixing such words up, but if there’s one nice thing about getting older, it’s the knowledge that things could really be much worse.

I parked on Bath Street, by the freeway off-ramp and generally wandered [doublechecks] west to east.

First impression: does anyone else think Swell is an odd name for a fitness facility? Isn’t swell what your tissues do when they’re hurt?

Second impression: Maybe spread the kiosks out a little?

Third impression: This is an old neighborhood, which means established trees. The last one is thique. I actually have no idea whether I’m using that properly, but I was hell-bent on getting in a reference to Beyoncé’s terrific new album.

The many vintage houses give the neighborhood an East Coast or Midwestern vibe, if you ignore the succulents and palms.

This one deserves to be savored from two angles. 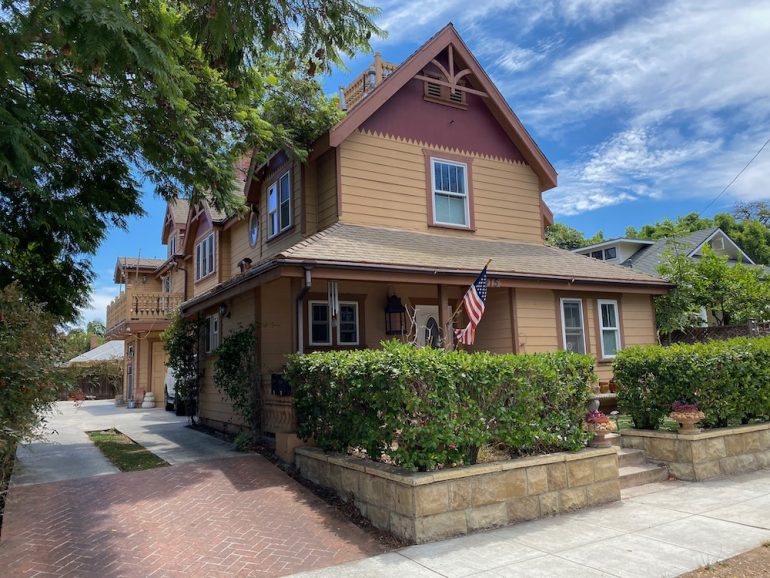 I was pleased to see many owners had put up signs along these lines.

And I clung to memories of those signs when I noticed the one on the house below: “Never mind the dog. Beware the owner!” with a drawing of a gun.

Change is coming, as it tends to.

Residents are not shy about decorating their property. The display celebrating Ketanji Brown Jackson caught me by surprise. You don’t often see positive effigies. 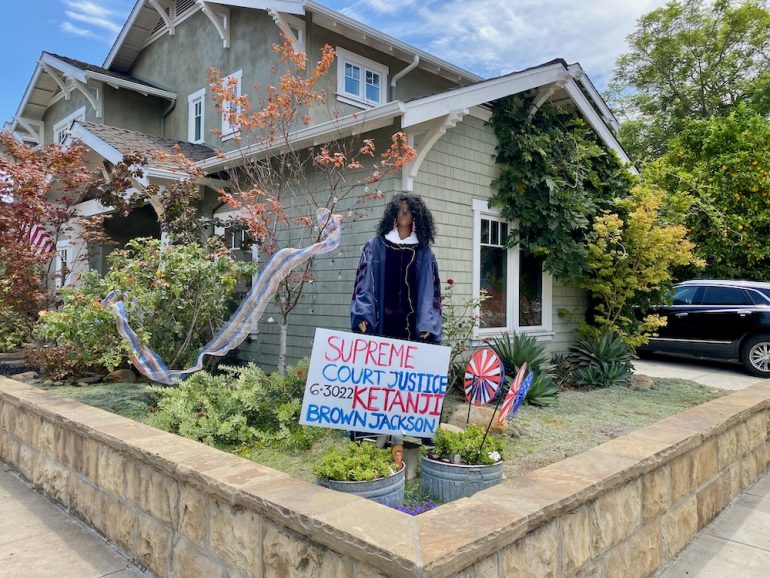 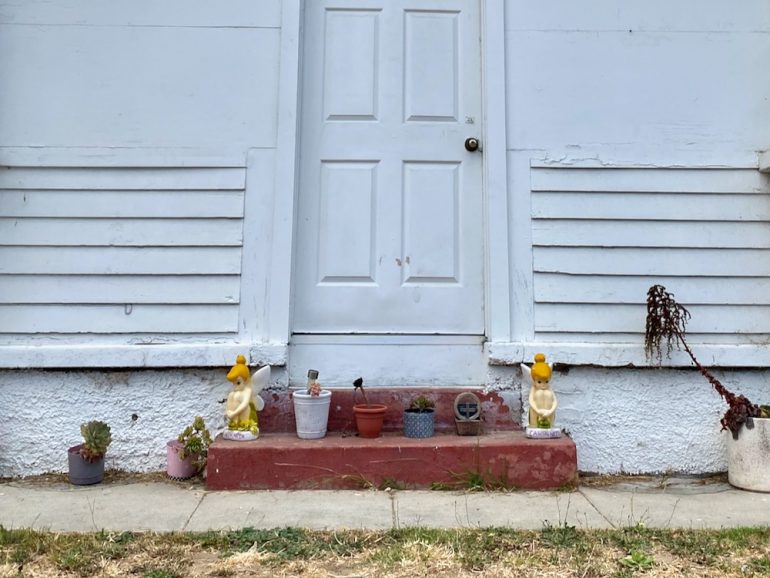 Another gun, but less threatening.

While approaching this next house, I could tell the portrait was of a man, and possibilities marched through my mind. Jesus? Elvis? No. It’s Christopher Walken.

There are a fair number of multifamily properties, many of which make good use of long lots. Check out the gate in the second shot.

And naturally there are bungalow courts.

I’d be remiss not to mention the lovely mountain views.

The freeway creates many cul-de-sacs, three of which are just one block long (i.e., “avenues” in Santa Barbara parlance): Dibblee, Ruth, and Transfer. The “slow child” sign struck me as unnecessary, because how fast can you even go on such a short street?

I walked all the itty-bitty streets in the wedge—even the one marked public alley, until I discovered it wasn’t a through street, like in Oak Park. I did come across a glittery E on the pavement there, which felt serendipitous because my name is Erik. (If you’re one of the people who assume I’m a woman because I’ve mentioned my husband, you are way behind the times.)

Normally, I love a pedestrian overpass, like the one at Ortega, but the afternoon sun was brutal. I walked it anyway, of course. The birds are by David Shelton, brother of Jeff.

As ever, there were cool old cars…

…along with other vestiges of the past. The metal umbrella took me back to my Tastee Freez days.

I don’t recall these street markers in other neighborhoods (at least not yet). (Update: “There are more of those street markers!” says DC. “In the area around De La Vina near Pueblo and Los Olivos, you’ll even see ones with street names that are no longer.”)

Finally, the Brinkerhoff Avenue Landmark District, the heart of which is Brinkerhoff Avenue. Such marvelous houses! The turquoise one has “OGLE” on the front door, as if the color isn’t invitation enough. (The Independent wrote about its history in 2020.)

Bradbury Avenue is sort of a sister street to Brinkerhoff, but some regrettable decision-making allowed two awful buildings to butt in. It’s still worth a walk though, in good part for 124 W. Cota (discussed here, and famous for the exterior catwalk between floors) and the bungalow court at 610-612 Bradbury (discussed here).

This building looks like it got turned inside out.

The area’s zoning must be a bit higgledy-piggledy, for there are businesses mixed in throughout. The Independent dug into the history of 501 Chapala, directly below, in 2016. The “Our Slice of Paradise” mural at International Autohaus (a name that must be said with an accent), is stellar. And as is often the case on these walks, when I couldn’t tell what a business does from the name and sign, I looked it up. Campo builds out campervans.

One day I’m going to do a post on Santa Barbara’s many corner markets, a distinguishing characteristic of the city.

Love the building at 800 De La Vina (at De La Guerra), and the historical marker is pretty helpful.

Other markers were more about what used to be there.

I walked up Chapala even though it has a different, more commercial character than the rest of the area. 433 Chapala, directly below, is poised to get redone rather nicely. And the former Romanti-Ezer space at Ortega is going to be a restaurant specializing in street tacos.

The proximity to Paseo Nuevo provided an opportunity to wander over to Tondi Gelato. A friend had recommended the fruit flavors, since Tondi shops at the farmers’ market, and the fig (shown here with peach) was indeed very good.

Santa Barbara’s abundance of flora never stops being a delight. I couldn’t tell what the first tree below is; that’s its fruit in the second photo. Or maybe it’s a squash vine crawling atop the tree? (Update: T. and BW tell me it’s passion fruit, which I’ve only ever seen fully ripe at the farmers’ market.)

And there was fauna, too. In my mind, every lizard with a half-tail is named Stubby.

And faux fungi: the mushroom-inspired steps at the Bath St. Pocket Park remind me that I’m ready to try psychedelics. (Blame Michael Pollan.) Probably won’t live-blog that, though.

Downtown Santa Barbara
• Mixing Business and Pleasure in East Beach• It’s Only Milpas Street (But I Like It)
• The Haley Corridor Is Keeping It Real
• The Small Pleasures of Bungalow Haven
↓↓↓ Is There a Better Neighborhood for a Stroll Than West Beach?
• E. Canon Perdido, One of Downtown’s Best Strolling Streets

Montecito
• The Heart of Montecito Is in Coast Village
• Quintessential Montecito at Butterfly Beach
• Once Upon a Time in the Hedgerow…
• Where Montecito Gets Down to Business (Coast Village Circle)
• In the Heart of the Golden Quadrangle
• Up, Down, and All Around Montecito’s Pepper Hill
• Montecito’s Prestigious Picacho Lane
• School House Road and Camphor Place 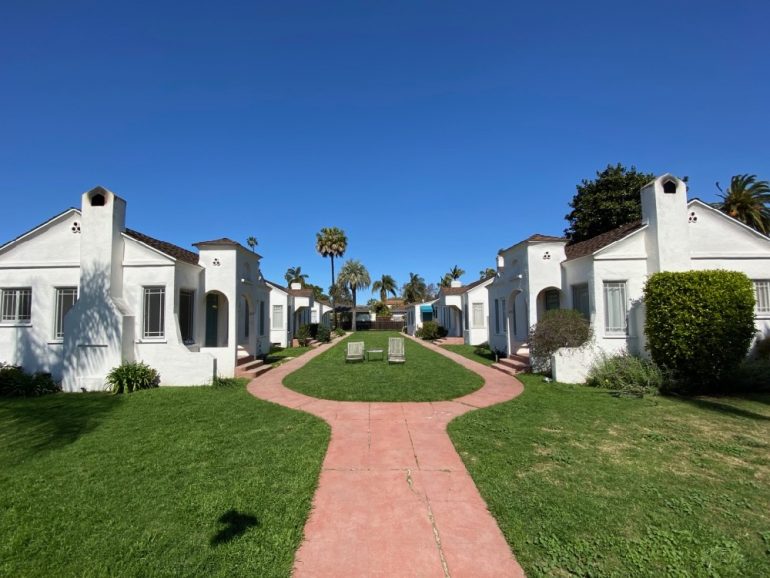 The vine in question is passion fruit. The fruits will darken to a reddish purple as they ripen. They do very well here even with neglect. We have several and are overwhelmed by fruit right now.

There are more of those street markers! In the area around DLV near Pueblo and Los Olivos, you’ll even see ones with street names that are no longer.
And fyi, Ogle is the last name of the man who owns/owned that Brinkerhoff property.

fun fact: Charles Manson lived next door to the little corner store for a short spell back in the day.

That is so bizarre. My best friend lived in that building in mid 1970’s. We had graduated from UCSB and we were both waiting tables at 1129. Very creepy.

We enjoy your columns soooo much. Thx.