Having been to Old Town Coffee a few times (and loved it), I figured I knew where Old Town Goleta is, more or less. Just to be sure, I tried looking up its borders before setting off—and there was nothing online. So I checked with the Santa Barbara South Coast Chamber of Commerce, which said that the core part of the Old Town district is on either side of Hollister Avenue from S. Fairview Avenue to the 217.

My friend L. joined me for the afternoon stroll, and we realized immediately after parking on a side street that the “old” in Old Town Goleta is no lie.

Layers of history were visible everywhere: note the sign for La Esmerelda Market in the photo of the Goodland Kitchen building, which has more recently been a restaurant called Goodland Dining, but I don’t know if it’s open anymore. It was closed the day of our walk and also when I went back a different day, and no one answered the phone.

When I was editor of Budget Travel magazine, we often featured “supermarket souvenirs,” because foreign supermarkets are reliably interesting. While obviously not foreign, Santa Cruz Market certainly delivered on the interestingness. I found it more rewarding than the one on W. Montecito Street, but maybe I was just in a mood to explore.

L. and I marveled at the old S&H Green Stamps sign still affixed to the supermarket. If you’re too young to know what Green Stamps were, lucky you. From Wikipedia:

S&H Green Stamps was a line of trading stamps popular in the United States from the 1930s until the late 1980s. They were distributed as part of a rewards program operated by the Sperry & Hutchinson company, founded in 1896 by Thomas Sperry and Shelley Byron Hutchinson. […] Customers would receive stamps at the checkout counter of supermarkets, department stores, and gasoline stations among other retailers, which could be redeemed for products in the catalog

While taking a side-street detour, I officially decided to start collecting photos of apartment buildings named after women.

Then we committed to the main drag of Hollister Avenue for a bit. The name of Latinos Insurance Agency sure seems a bit on the nose. Anyway, I loved the Miami Beach-ish office complex in the second photo, and the old-school vibe of Alphie’s Restaurant, closed for the pandemic. 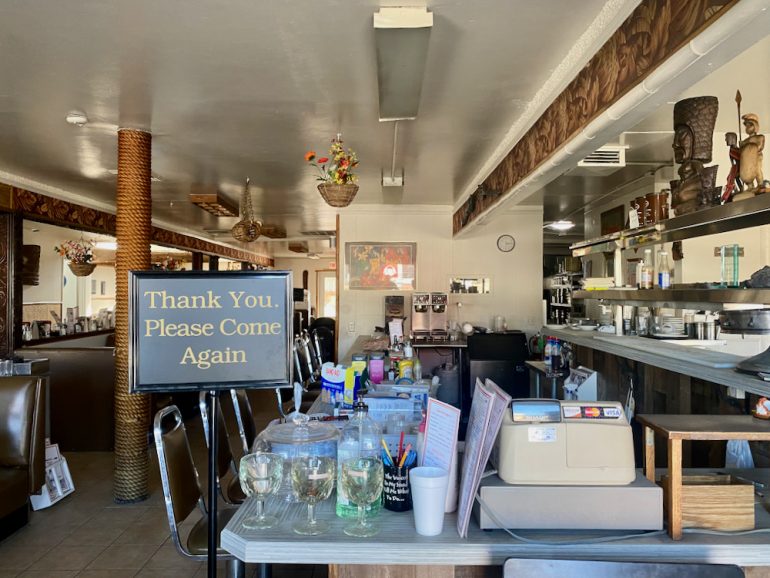 If Alphie’s isn’t enough to make you feel like you’re in a small town, check out the gazebo outside the Goleta Valley Community Center; it looks like something out of The Music Man. 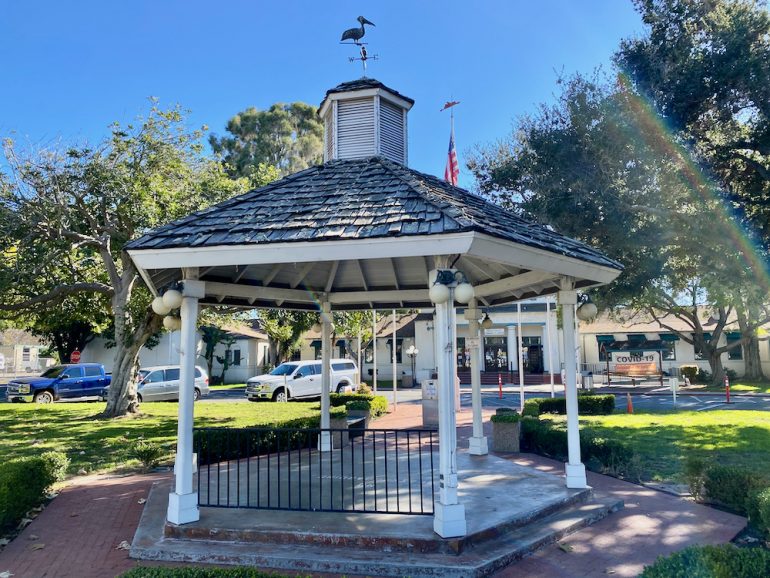 We debated whether this dolphin was meant to be a seat or a sculpture, before deciding that it was probably the latter co-opted as the former.

I didn’t make L. cross Hollister to go inside Suds City, despite my avowed obsession with laundromats. (I made that film—that prize-winning film—in college, many years ago.)

We got excited for an adventure when we saw the sign for the Old San Jose Creek public trail, but before long we were at an apartment complex. It was postmodern and colorful, but not what we were hoping for. We stayed on whatever road we ended up on, admired the Montecito-esque trees outside a house, and found ourselves on a strip of car dealerships. The Honda sign looked like it’s made of plastic and filled with water, and I took far too many photos of the inflatable guy.

Going into the walk, I had predicted that we’d see a vacuum-repair shop, because Old Town Goleta just seemed like one of those stuck-in-time places where such a business might still have a storefront. The closest we got was the trophy maker (which seems related, but maybe only to me). And having approached Uni-Boil from the rear, we couldn’t imagine what kind of business it might be.

I tried to explain to L., who did not grow up in California, how the Carpeteria font and jingle are seared into my brain from years of seeing its TV commercials. (“Anso IV nylon pile!”) The jingle also made me mispronounce Carpinteria for a long time.

Having just about reached the 217, we crossed to the north side of Hollister and wandered into Jonny D. Wallis Neighborhood Park. (What’s the point of “Neighborhood” in the name? No one is going to confuse it with a state or national park.) The bike path is more of the Old San Jose Creek trail, it turns out.

We debated what the things below could possibly be. In hindsight, it seems obvious that they’re bike racks, but because they were far from the entrance, that eluded us for a while. 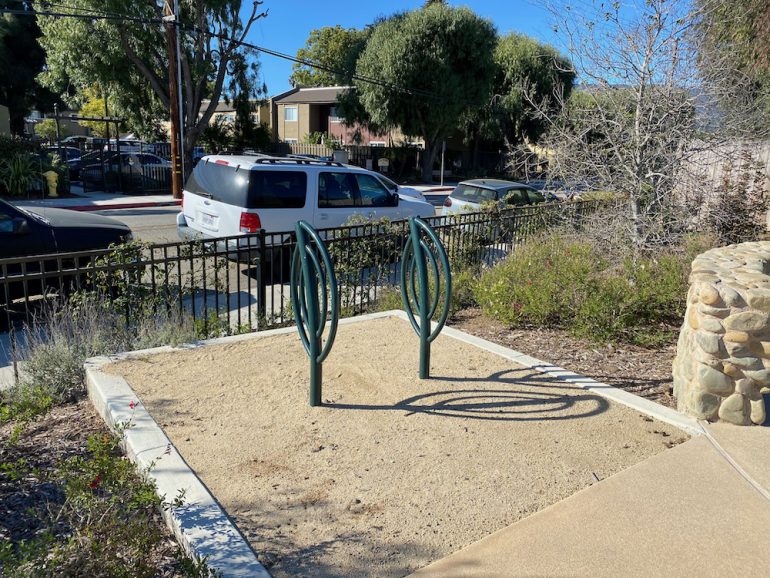 We continued north on S. Kellogg Avenue, and I got us lost in an industrial area that wasn’t entirely without a certain charm—we really felt like we were somewhere else.

And then we wandered along some residential streets. Most of the houses weren’t remarkable, exceptions being this stylin’ midcentury and one owned by someone I think we can assume is a Leo.

if the houses weren’t special, the cars made up for it. 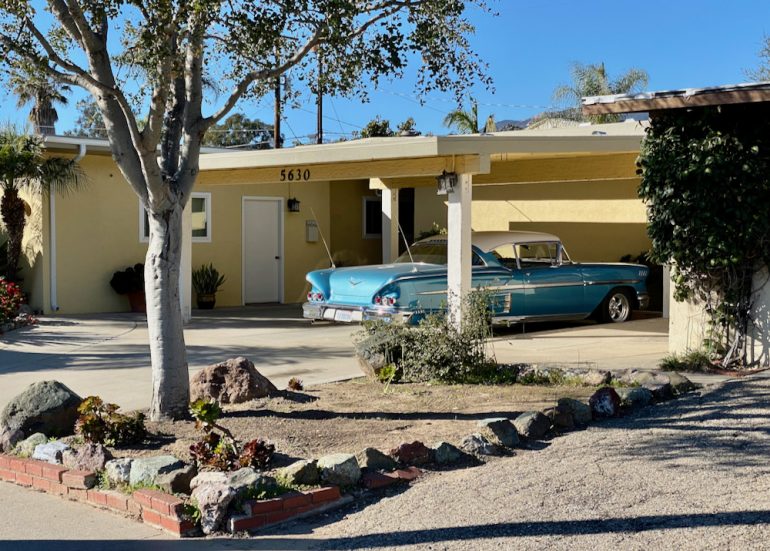 Back on Hollister, the Goleta Sushi House has ghost signage under its awning for “Justice Court: Goleta Hope Ranch Judicial District,” and then it says something like “S. Steve Austin Constable” underneath. I couldn’t find anything about it online, even on Goleta History, which surprised me.

And then there was ghost signage of a more recent vintage….

I need to return to El Rodeo western-wear store for a new hat—preferably a Stetson, so I get the awesome hatbox—and work boots. (Not cowboy boots, I hasten to add.)

A used-book store! It was closed the afternoon we were there, alas.

L. and I got very tingly about the vestigial Art Deco sign on Cindy’s Produce & Groceries, sure it was from the middle of last century, until we determined that it was for a tanning salon. The Cindy’s made up for it: “All Ingredients Direc From Philadelphia.”

This residential area was a relief after Hollister, where the sun was beating down hard. Goleta recently completed a big sidewalk project in Old Town, and you can see what a difference it must have made. People would’ve had to walk in the streets.

Unable to tell what Power Research could mean from the outside, I cupped my hands against the glass, and naturally saw someone sitting right inside, looking back at me. It had to wait till I got home: the Power Research Racing Facebook page says it’s a “motorsports store […] founded by Chief Galbraith so cal hotrod pioneer.” There’s not a lot online, but it seems to soup up old cars for drag racing.

It seems to have many tenants, and nil signage, but we did take note of this car and wondered what Noptic could mean. Those things on the windshield looked formidable. Noptic, according to its website, “enables police to conduct stealth surveillance at night in complete darkness and at various temperature extremes.” We’ve come a long way from blacksmithing….

Walk With Me…
• The Haley Corridor Is Keeping It Real
• The Unvarnished Appeal of Yankee Farm
• Where Montecito Gets Down to Business
• The Small Pleasures of Bungalow Haven
• The Small-Town Charms of Samarkand
• Climbing the Back of Eucalyptus Hill
• Admiring the Backsides of Beachfront Houses on Padaro Lane
• Social Distancing Made Easy at UCSB
• In the Heart of the Golden Quadrangle
• Is There a Better Neighborhood for a Stroll Than West Beach?
• Up, Down, and All Around Montecito’s Pepper Hill
• E. Canon Perdido, One of Downtown’s Best Strolling Streets
• Montecito’s Prestigious Picacho Lane
• Whitney Avenue in Summerland
• School House Road and Camphor Place

Don’t think you missed a thing! Thanks for letting me join you.

This is a great article on Old Town Goleta. I learn something new on every one of your walks. I especially like all the pictures. Thank you for bringing a witty and fresh angle to the SB area.

Equestrian St. is where they would shoe horses and store carriages bitd. that’s why that pink building is so dated. that street also has a… — Tom Stanley