I first heard of Santa Barbara’s Bungalow Haven area last fall, when 1321 Alta Vista Road came on the market. I drove over to take a look at the house, and I was charmed by it and the neighborhood.

According to a proposal circa 2013 to have the neighborhood made into a historic district, it’s bordered more or less by Olive, Micheltorena, Alta Vista, and Victoria. Only after my recent walk did I learn that some folks extend the perimeter to Laguna and Anapamu.

I parked on Olive just below Victoria, between two Santa Barbara classics: a stone garage and a corner market.

This is far from the only California city to have a bungalow district. The proposal mentioned above explains why:

At the beginning of the twentieth century, bungalows took America by storm. The typical bungalow was a single-story structure suited to a warm climate, with verandas for outdoor entertainment, overhanging eaves and multiple windows to provide shade and cross-ventilation in the days before air conditioning. These small houses helped fulfill many Americans’ wish to own their own home. With climate and economic opportunity drawing more people westward, homey Craftsman bungalows sprang up rapidly in California. The Ready-Cut Bungalow Company estimates it shipped over 40,000 bungalow kits to Southern California from 1910 through the 1920s. For about $650 everything you needed to construct a bungalow would be delivered to your lot. […]

Santa Barbara’s population increased dramatically from 7,000 residents in 1900 to 34,000 in 1940. The Bungalow Haven Historic District was one of the neighborhoods that was home to the City’s expanding working and lower middle class as it was within walking distance of downtown.

The proposal goes on to say that “over half the houses in the proposed district are in the Craftsman style,” which is not difficult to believe. 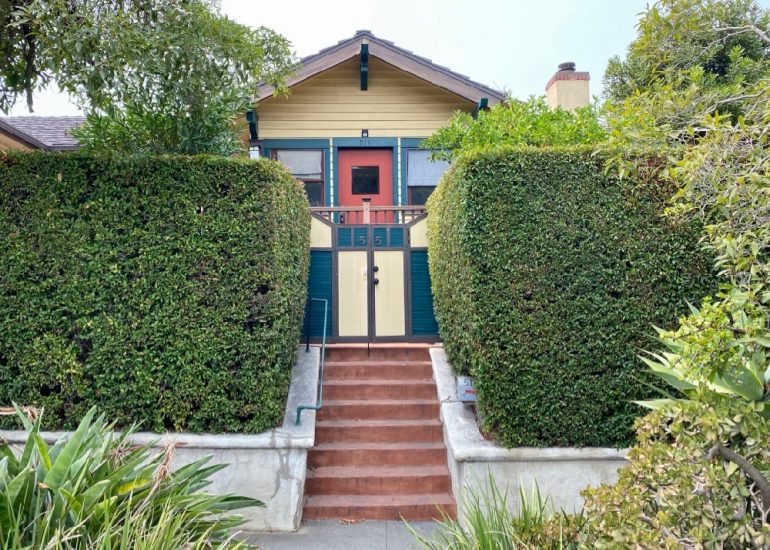 They’re almost all small. Every now and then, a tree emphasizes exactly how small.

And, naturally, the houses are not all as spiffy as the photos above might lead you to believe—but this website is getting enough traction that it feels risky to call someone’s home a dump. I have fewer qualms, however, about this dog of an apartment complex or this truly hideous office building.

Two interesting architectural choices caught my eye. Why would you want a window at ground-level next to your front door? And why would you put a front door over the garage?

As you may have deduced, these photos are not in chronological order. I walked every street in the proposed historic district, which entailed backtracking, and writing about it linearly would be (more?) tedious. So here are some things that drew my attention hither and yon. Appealing sets of corner stairs…

And this being Santa Barbara, an ocean view.

The cul-de-sacs were among my very favorite parts, possibly because I grew up on one (in Orange County). They feel like micro-communities.

I was dying to poke into the yard (below) at the dead end of De La Vista Avenue, but I could hear people chatting. Eventually, I passed by the yard’s house, on a different street (the western dead end of Colina Lane).

When I walk around a neighborhood and take photos, my guard is up, because I know I can make people nervous. And I did get one or two stink eyes pointed my way on this little adventure. So maybe that explains why, while on the eastern half of Colina Lane, I could’ve sworn I heard a woman scream, “Get out of my street!” Was she was speaking to me? “No, I’m talking to these squirrels! They’re eating all the nuts on my macadamia tree!” She had said “tree” instead of “street,” and we shared a laugh.

Last year, while poking around the Lower Riviera, I discovered Bella Riviera, and assumed it was just a big planned community. It is a planned community, but an interesting one (not architecturally, although it could’ve been worse). It’s part of the Cottage Health System, according to this website about the project: “Bella Riviera, at the former St. Francis Hospital site, was initiated by the Santa Barbara Cottage Hospital Foundation as a means of providing affordable homes to […] those employed by the Cottage Health. Our goal is to improve [Cottage Health System’s] ability to attract and retain medical professionals [….] The project consists of the demolition of the former St. Francis campus buildings and the construction of 115 townhomes on the approximately 5.9 acre site. SBCH Foundation is undertaking this project in order to provide 81 affordable homes to our employees.” The plaques in the third photo below tell the story of St. Francis Hospital.

A few more details spotted on the walk…. Unfortunately, I don’t have a photo for the best one. A man was sitting on a porch, reading, behind a “HELP ME” sign. I came very close to asking if he was OK, but he seemed fine—and like he didn’t want to be bothered, because he didn’t look up at me at all. We’ll have to be satisfied with the mystery.

A front-yard playground is rather aggressive; hearing other people’s kids is one thing, but having to see them is another. Perhaps it’s Halloween decor.

From what I can tell, the Bungalow Haven neighborhood has yet to be officially recognized by the city as a historic district. It certainly seems worthy to me.

Walk With Me…
• The Small-Town Charms of Samarkand
• Climbing the Back of Eucalyptus Hill
• Admiring the Backsides of Beachfront Houses on Padaro Lane
• Social Distancing Made Easy at UCSB
• In the Heart of the Golden Quadrangle
• Is There a Better Neighborhood for a Stroll Than West Beach?
• Up, Down, and All Around Montecito’s Pepper Hill
• E. Canon Perdido, One of Downtown’s Best Strolling Streets
• Montecito’s Prestigious Picacho Lane
• Whitney Avenue in Summerland
• School House Road and Camphor Place