Having conquered the back of Eucalyptus Hill many months ago, I thought it was high time I walked the front. After parking on the Camino Viejo side of Hale Park, I headed south. The intersection of Camino Viejo, Alston, and Summit is even trickier to navigate on foot than in a car, so if you do as I did, be careful.

I set off down Summit Road, which a friend had recently recommended. A rusty wrought-iron gazebo is barely visible on the long peninsula of land between Alston and Summit.

The midcentury house in the first photo below caught my eye—I do covet a porte-cochère—although the harsh afternoon light made it hard to capture. The house was like a forerunner of the contemporary one that followed. 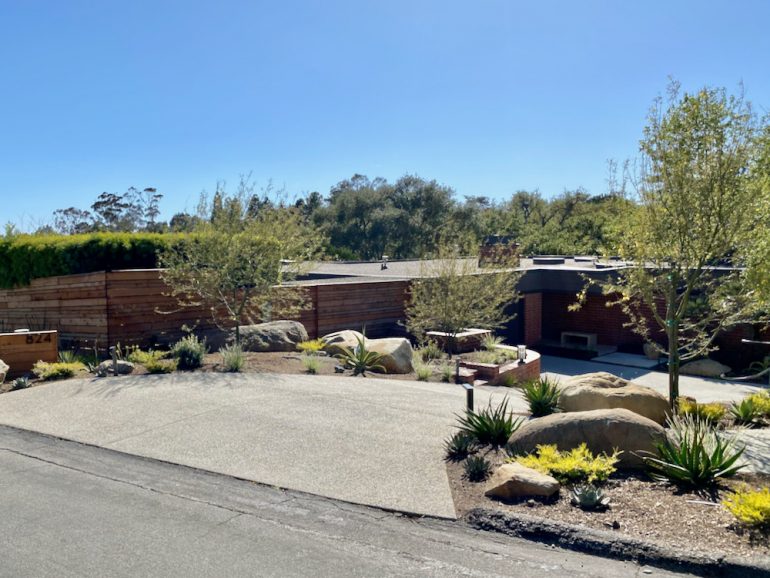 The most prevalent architectural style was the California cottage. A neat feature of the first one below: a driveway that mostly blocks the street.

Whenever I see this car around town, I’m impressed by the brand dedication—the trademarkGucci stripe, the nameplate next to the right taillight, and of course the license plate, even though it seems like more of a reference to rapper Gucci Mane….?

As on every walk, there were head-scratchers—like this fragment of a picket fence and an ornate mailbox 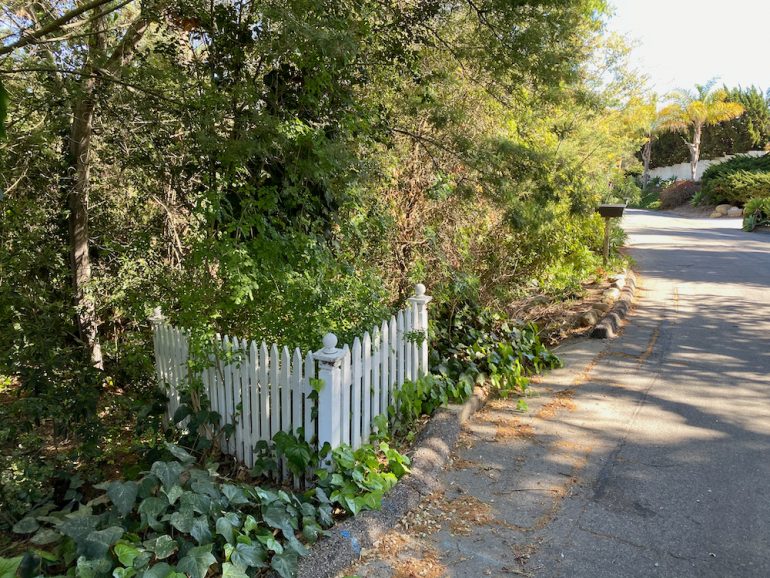 Cachette means “hideout” in French. I was hoping it also had a dirty slang definition, but no.

You had to be there for the next house, but it appeared to be on the other side of a ravine from the garage, accessible via a bridge. I’m sure the arrangement has grown tiresome for the residents, but I thought it romantic.

I had no idea that non-members are allowed to walk through the Montecito Club parking lot, so they can continue out the main entrance to the rest of Summit Road and, eventually, to Hot Springs Road. Because that wasn’t the point of this outing, and because I know someone will someday invite me to the club for a real visit, I only poked in to take a photo of the main building. I later went back later for a jog—highly recommend it.

At this point, Summit joins up with Rametto Road, and the houses take a sharp turn for the fancy. Love the cobblestone motor court in the second photo and the garden gate in the fourth. 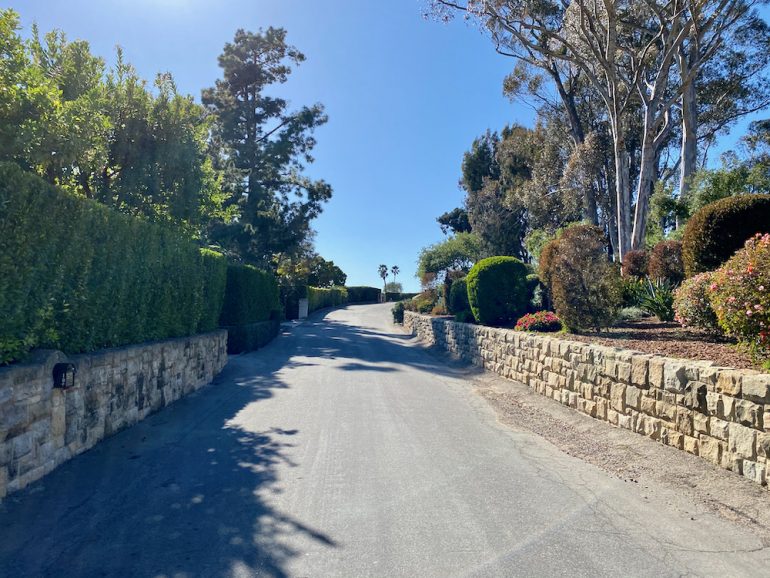 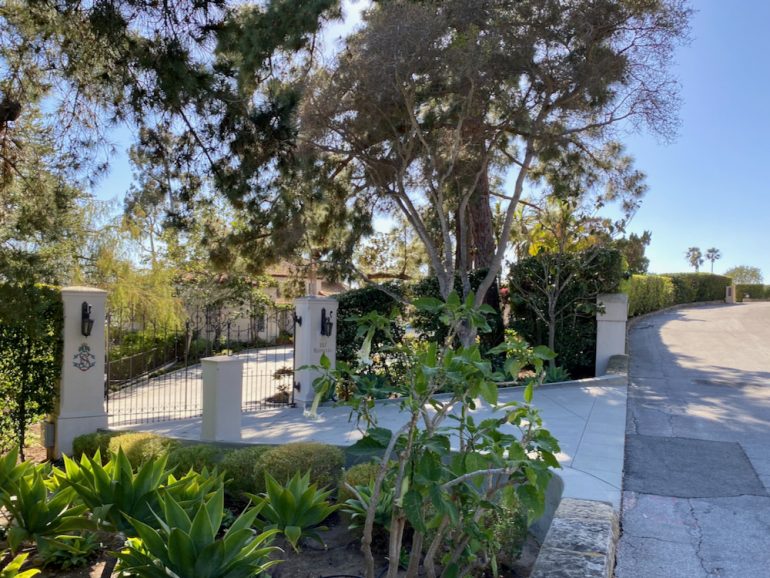 I can’t tell how ritzy this one is, but the curb appeal is off the charts. 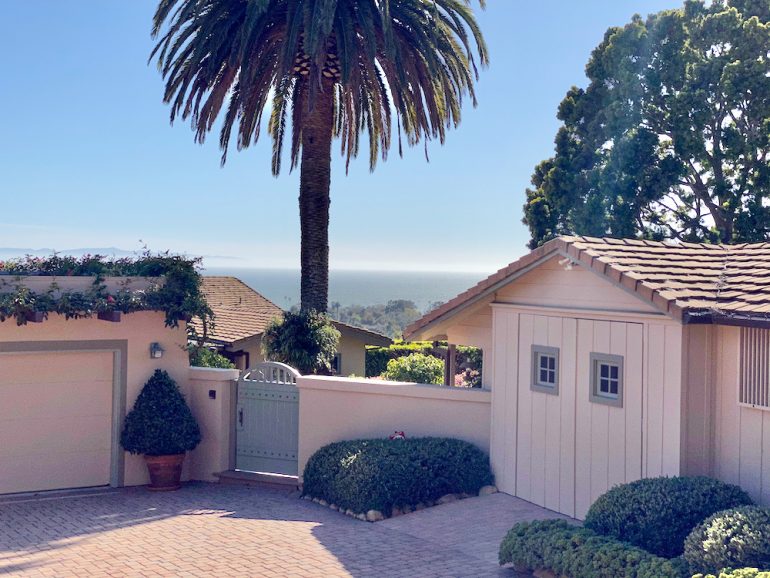 Moving along, the “129” gave me a serious graphic-design tingle. And the serious mailbox nearby is like a little fortress. 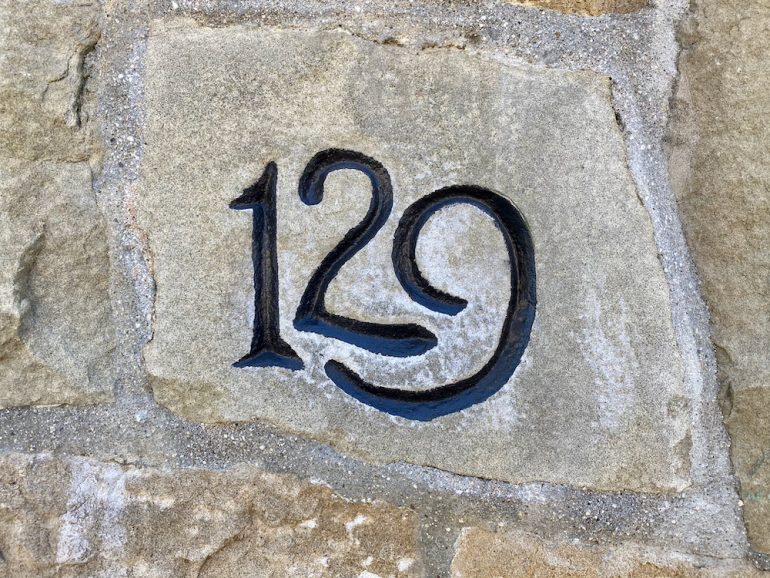 Heading back up toward Alston, there were more California cottages….

Augusta Lane is a little crooked-finger of a street poking south off Alston between Rametto Road and Cima Linda Lane. I felt like I had accidentally wandered into Connecticut. 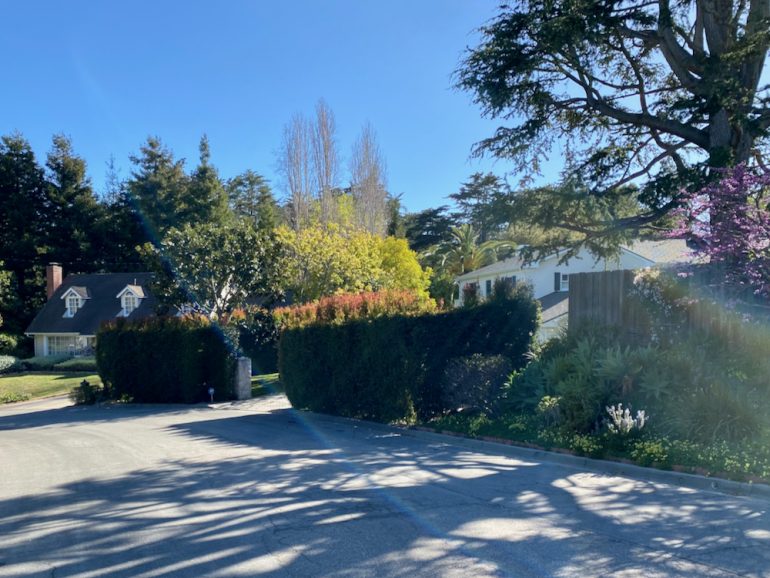 If you’ve ever driven on Alston then you must have noticed the impressive stands of bunya-bunya trees. I suspect the homeowners don’t like them as much as I do, because you apparently need to have the cones professionally removed, lest they conk someone on the head.

These Cima Linda residents really went for it. Even the chimney got painted charcoal. 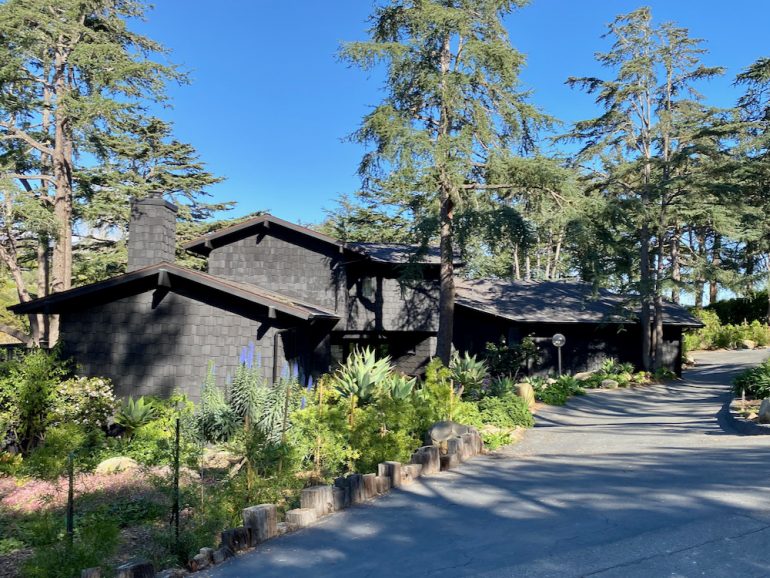 Once again, the houses increase in grandness as you head toward the ocean. Imagine driving home through this gate. Or any of them, really. 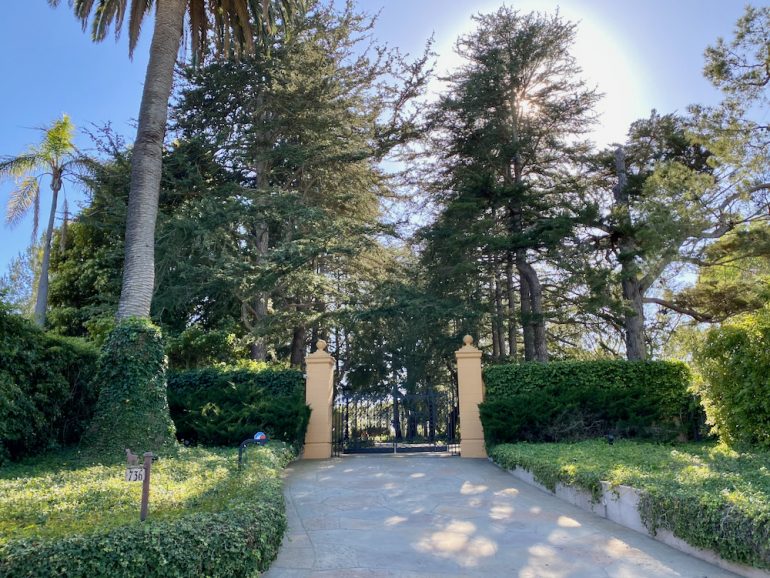 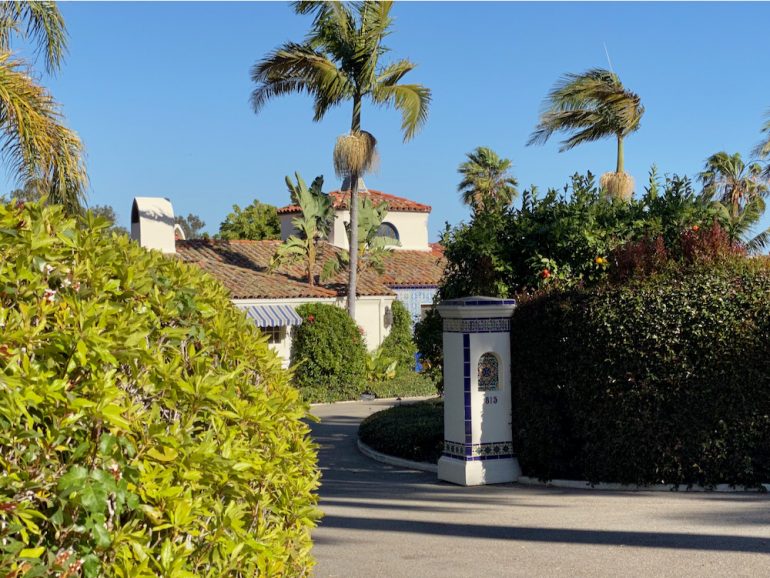 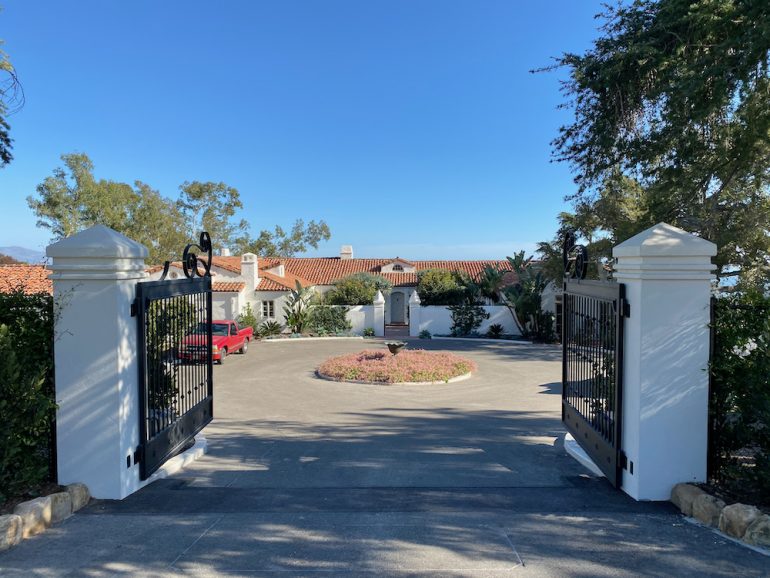 That little slanted-roof building in the last photo totally turns me on, and I don’t know why. The house below is less my type, at least from the outside. Why is the owner going to so much effort to build stairs down to the street? Are guests not allowed in the motor court?

Dangling off the end of Cima Linda is steep little Owen Road. The houses didn’t make as much of an impression as the sweeping view and, near the cul-de-sac, an oddly narrow set of stairs.

Well, you don’t see one of those every day.

More Cima Linda fabulousness. Years ago, my husband and I looked at the first house before the current owner renovated. It had an old Palm Springs vibe and the views were insane, but we couldn’t cope with the scale of the project. Regrets, we’ve had a few…. 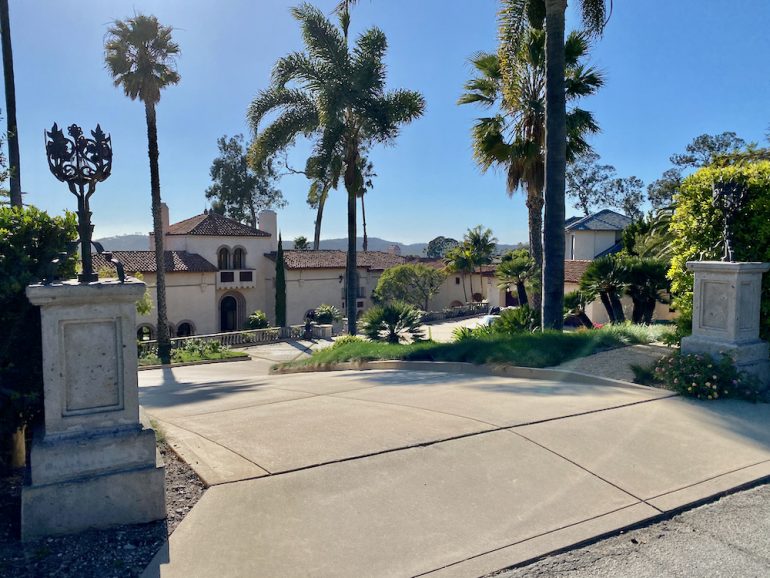 Is this some sort of family emblem? 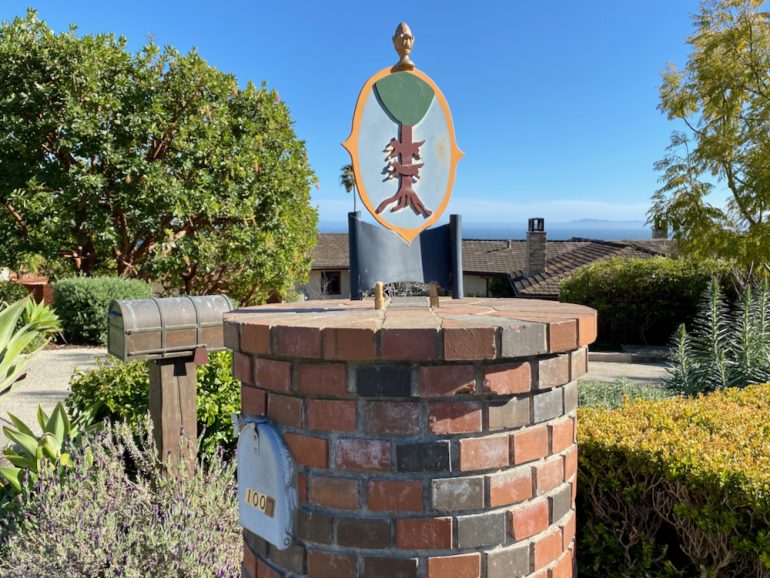 Not everything was peachy. This house looks like half of it has sunk into the earth. And perhaps I should start a hotline for anyone considering a red metal roof.

Oy, these signs were all over. I doubt poop scofflaws care whether they’re violating city ordinance 6.12.020.

The lower leg of Woodland Drive has a bunya-bunya growing out of the middle of the street and a house with a picturesque garden archway. 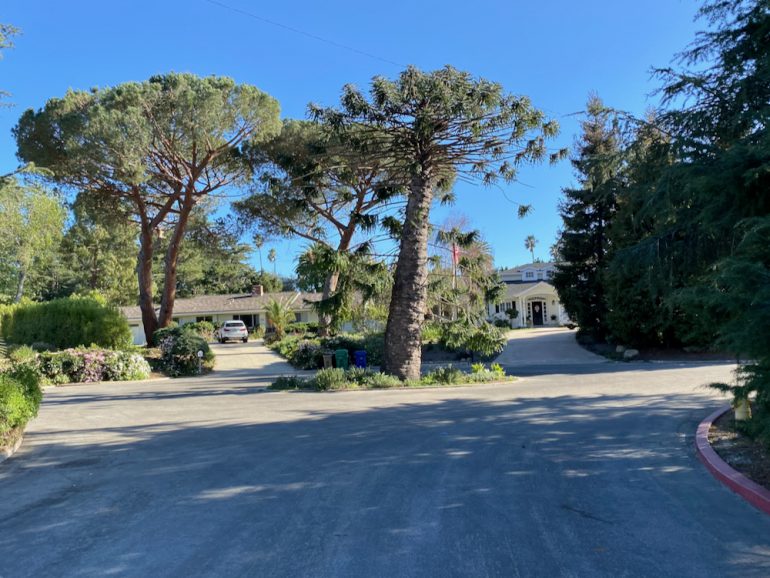 Upper Woodland, meanwhile, has that neighbor. 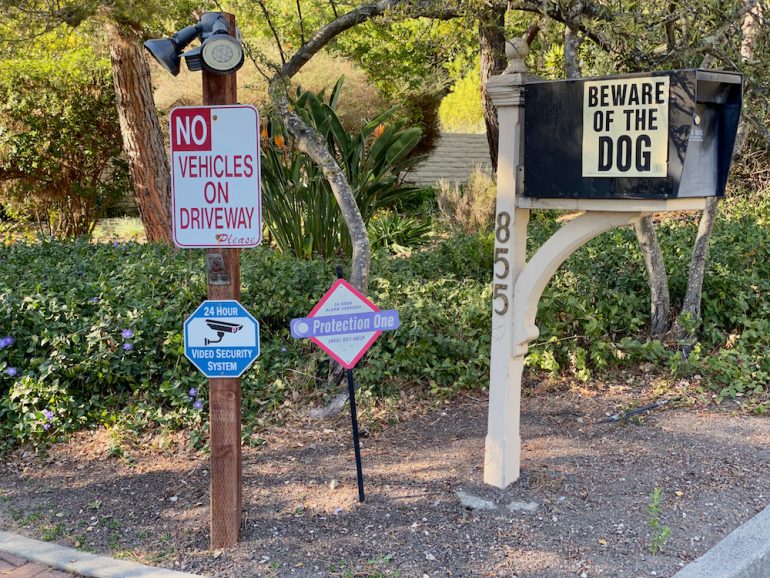 And elsewhere on the street, a topiary menagerie! 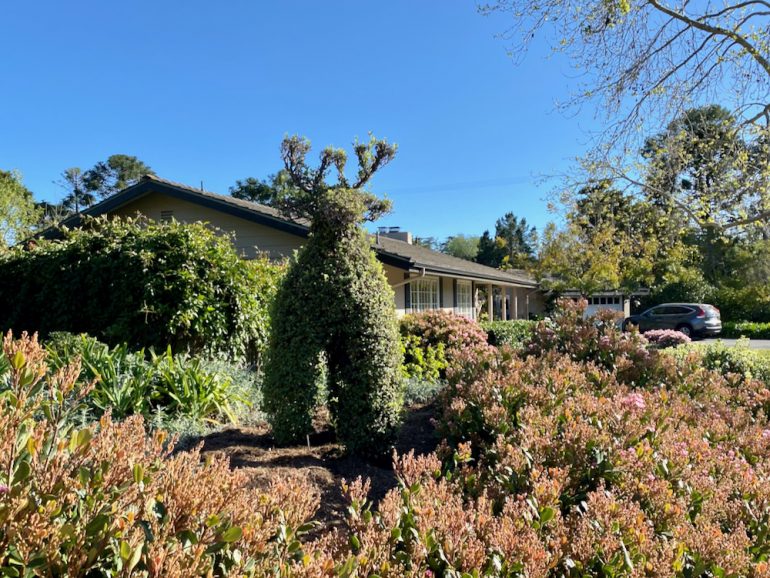 Walk With Me…
• The Past Is Still Present in Old Town Goleta
• The Haley Corridor Is Keeping It Real
• The Unvarnished Appeal of Yankee Farm
• Where Montecito Gets Down to Business
• The Small Pleasures of Bungalow Haven
• The Small-Town Charms of Samarkand
• Climbing the Back of Eucalyptus Hill
• Admiring the Backsides of Beachfront Houses on Padaro Lane
• Social Distancing Made Easy at UCSB
• In the Heart of the Golden Quadrangle
• Is There a Better Neighborhood for a Stroll Than West Beach?
• Up, Down, and All Around Montecito’s Pepper Hill
• E. Canon Perdido, One of Downtown’s Best Strolling Streets
• Montecito’s Prestigious Picacho Lane
• Whitney Avenue in Summerland
• School House Road and Camphor Place

I love this walk but apparently have missed so much….must find that topiary menagerie!