The most adorable neighborhood in greater Santa Barbara, and possibly the entire Central Coast, is the Hedgerow in Montecito. Like anywhere, it has its issues—namely, freeway noise and fog—but there’s nowhere better for a delightful stroll.

Parking can require flexibility. If the two spots on San Leandro Lane between Ramona Lane and Green Lane are taken, the Ennisbrook Open Space further west on San Leandro should have room. 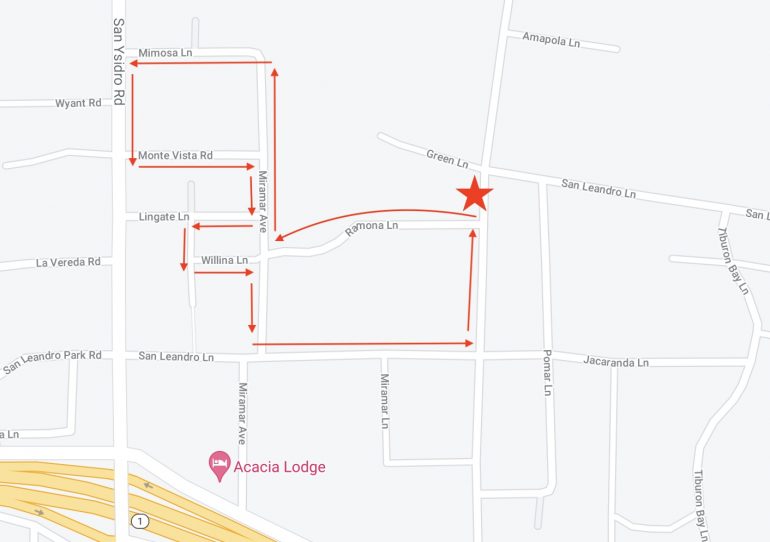 The Hedgerow expands beyond the area I covered, but in my opinion, these streets are la crème de la crème. First up, Ramona Lane. (Someday I’m going to make a family tree for the Lanes of Santa Barbara. For example, Ramona and Diana Lane could be the daughters of Norman and Willina Lane….) Montecito being Montecito, you often only get peeks of the houses, but they’re enough to fall in love. If you’d been walking with me, you’d have heard me cooing, gasping, and making mmm-that’s-tasty moans.

Hopefully this new one will loom less large as the landscaping fills out. It’s not entirely to my taste but the funky roofline is right for the Hedgerow.

An old-school garage is more my speed.

Heading north on Miramar Avenue, you pass Lingate Lane, which we’ll explore later on the walk.

Miramar Avenue has many appealing houses in a range of styles.

My husband and I once looked at a house near the Grange, and at the time, it was the kind of neighbor that gives you pause. Nice to see it has been spruced up, at least around the perimeter.

I love an old wooden fence like this, but as we’ll see later, an opportunity was missed.

At the north end of Miramar Avenue, two private lanes make a fork in the road. First, I went to the right.

Even though I grew up in Southern California, I still never tire of seeing orange trees.

And trees that poke through fences are the best. 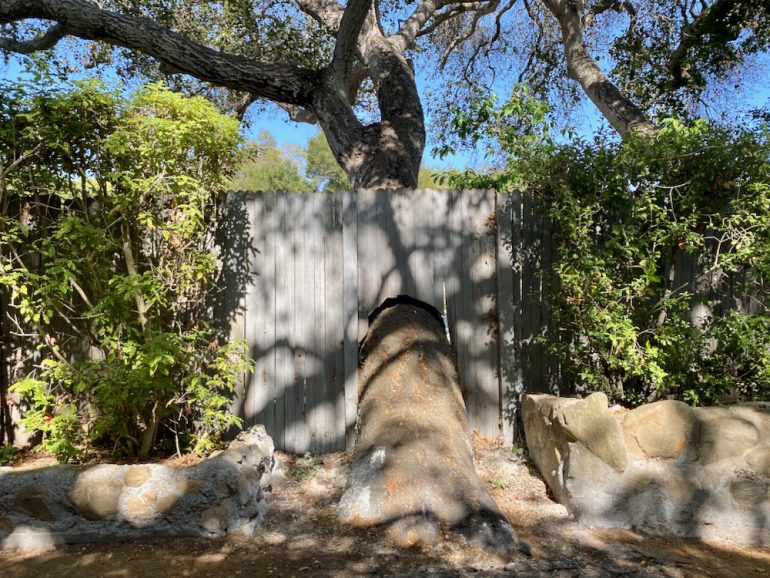 At the end of the right fork is a cool 1964 house designed by Jack Warner that, when I toured it years ago, needed new everything. I hope one day we’ll get a sense of what has been done to it.

The left fork makes it abundantly clear why this is called the Hedgerow. Seconds after taking this photo, I had to press myself into the pittosporum in order to avoid getting run over by a Fedex truck. The plant and I got more intimate than I would have liked.

The name of Mimosa Lane always reminds me of when I worked as an editorial assistant at Town & Country magazine, where one of my jobs was taking readers’ calls. They would frequently call because they couldn’t understand why an article would seem to end mid-sentence, and I had to explain that there was probably a “continued on page whatever” note at the bottom. Anyway, after a particularly absurd conversation, the other assistants and I would rate it as a one-mimosa call, a two-mimosa call, or worse.

Enough digression! More pretty houses, along with a rare contemporary.

The first two photos below are of 1505 Monte Vista Road, a fabulous 1933 Chester Carjola mansion that recently sold for $8.85 million. Look at the espalier work! The other photos are also of Monte Vista Road, including an amusing bit of trompe l’oeil. 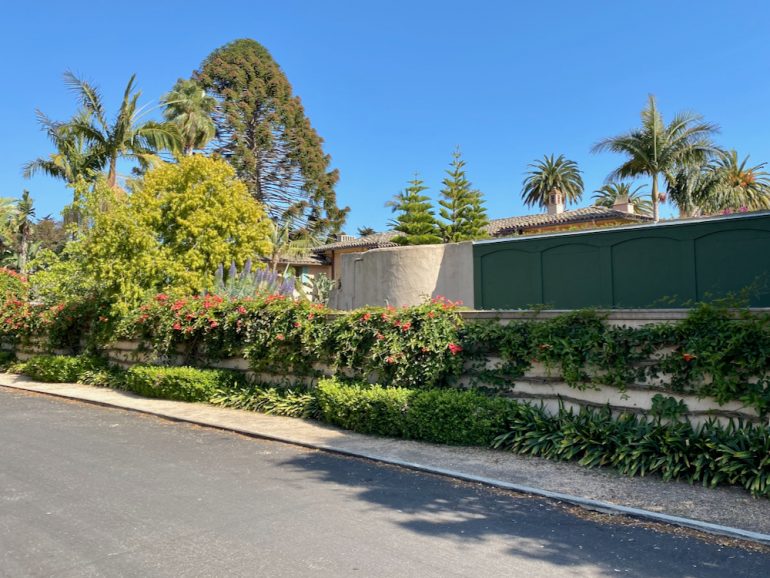 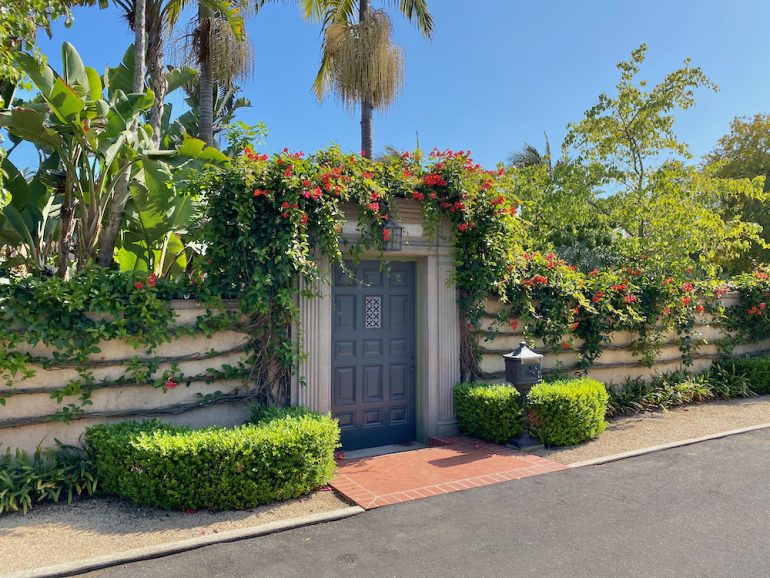 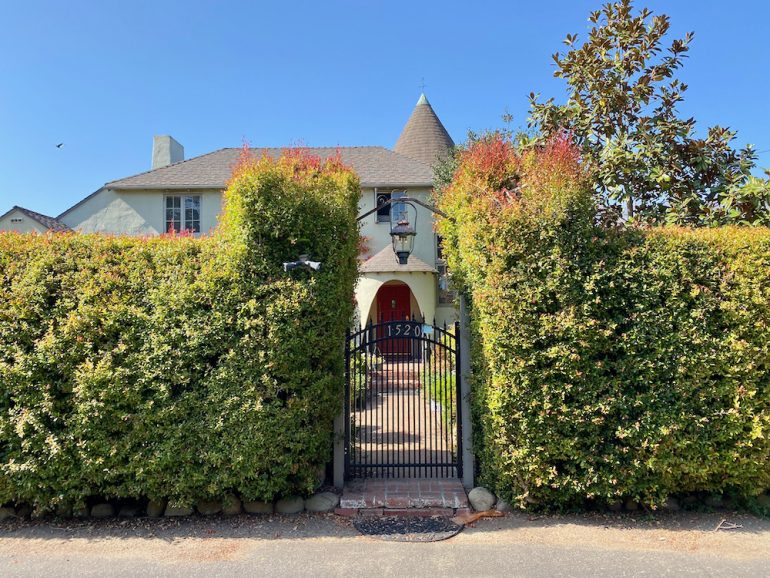 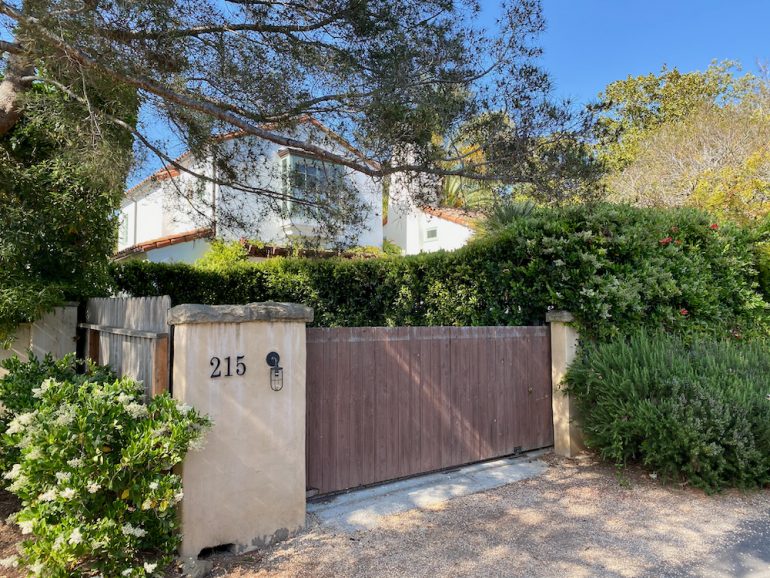 Back on Miramar Avenue, you can see what I meant about the wooden fence. It’s a shame the gate couldn’t have been made to match it.

And here’s Lingate Lane, which has two of my favorite houses in the Hedgerow. The first is straight out of a fairy tale. Indeed, a magic spell might be required to keep that roof in order….

Next door is less grand but no less delicious. 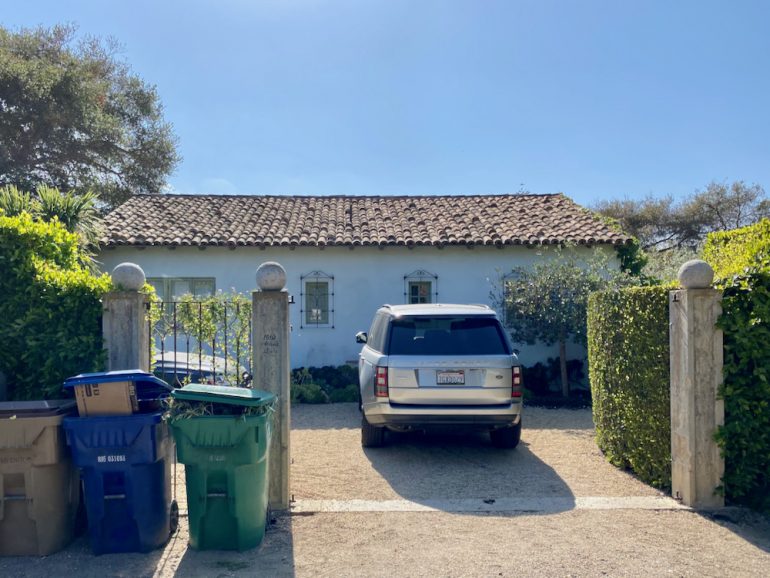 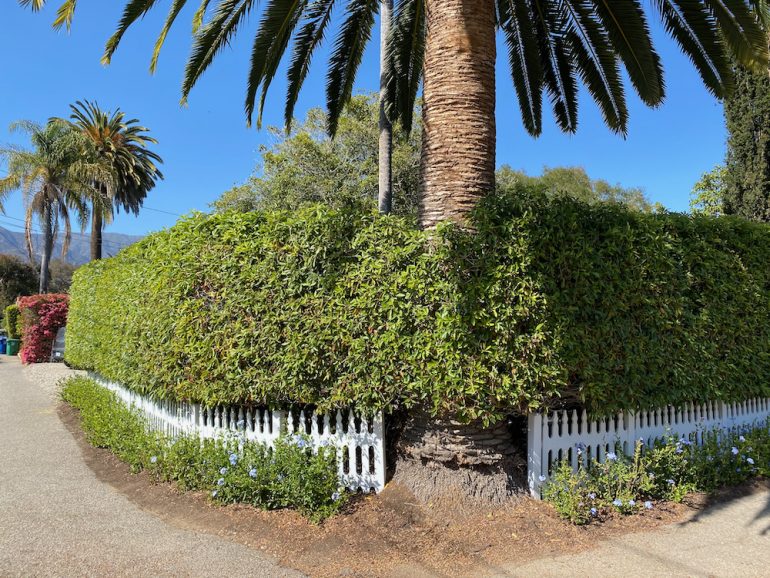 Kilroy, is that you? 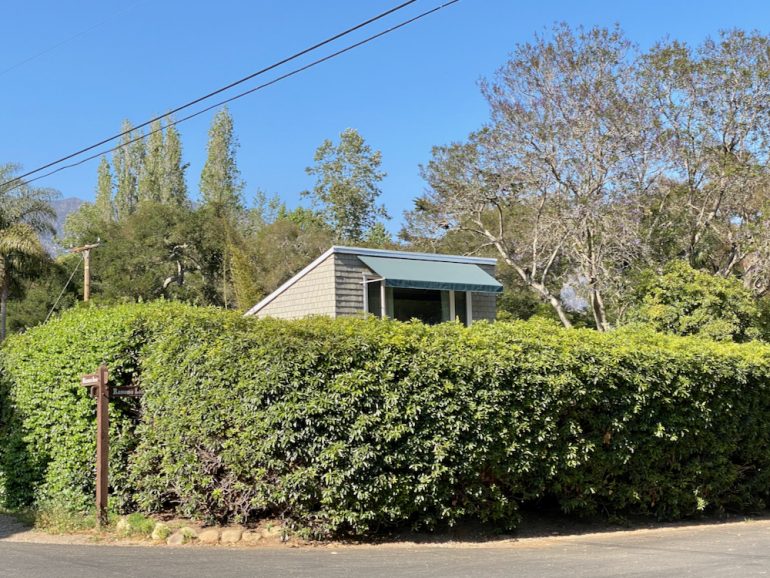 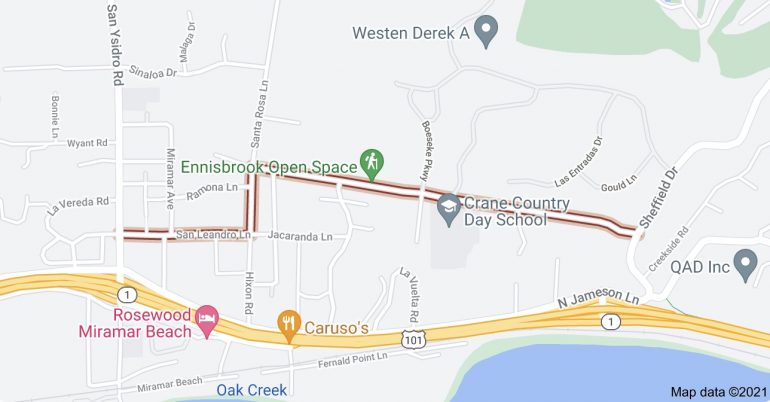 It seems safe to say this mailbox is the work of David Shelton, brother of Jeff.

Last but not least, the trees are wonderful throughout the Hedgerow, likely due to the fact that it was developed—if that’s even the right word—so long ago. I’m sure I’ve said this before, but I sincerely hope that Montecito residents keep planting interesting new trees; if not, as the old ones inevitably die or get cut down, the area will lose so much character. Oaks and other native trees only do so much.

Walk With Me…
• On the Golden Slope of Eucalyptus Hill
• The Past Is Still Present in Old Town Goleta
• The Haley Corridor Is Keeping It Real
• The Unvarnished Appeal of Yankee Farm
• Where Montecito Gets Down to Business
• The Small Pleasures of Bungalow Haven
• The Small-Town Charms of Samarkand
• Climbing the Back of Eucalyptus Hill
• Admiring the Backsides of Beachfront Houses on Padaro Lane
• Social Distancing Made Easy at UCSB
• In the Heart of the Golden Quadrangle
• Is There a Better Neighborhood for a Stroll Than West Beach?
• Up, Down, and All Around Montecito’s Pepper Hill
• E. Canon Perdido, One of Downtown’s Best Strolling Streets
• Montecito’s Prestigious Picacho Lane
• Whitney Avenue in Summerland
• School House Road and Camphor Place

Love it. We lived in 200 Miramar as a kid, early ‘90s. The backyard is bisected by a creek, which is very cool and slightly terrifying during El Niño years. We had duck families in spring. It’s a Moody Sisters cottage and despite the gate, is very dreamy. I have a lot of great memories there.

I live right behind the Mackenzie Market and in the past few months I have seen the property get cleaned up (thank you) new ownership. If I have one request for this new restaurant please have plenty of salads on your menu and offer them at a good or should I say reasonable price. I will be there often.

What a great article. Thank you for posting this.

This is a magical ‘walk about’ that I have been honored to observe for over 40 years having been on most all these properties as a Broker and Design Consultant. You provided memory lane for me and opened doors and gates for so many others …so beautiful!

My first home in Montecito was on Willina Lane…..in a little cottage previously owned by Fanny Flagg. Fried Green Tomatoes was written while she was in residence. I loved the neighborhood then and still do now. Speaking of love – I’m a big fan of Siteline – best read out there.

I agree on Siteline, Lee, and recognize all the lovely homes you have so beautifully remodeled to enlighten our Montecito neighborhoods.