This is the fourth in a series of occasional walks, on streets chosen more or less at random. Because when you slow down, you see so much more.

It was E. Canon Perdido that made me realize what a rewarding walking city Santa Barbara is—the mountains in the distance, the variety of architecture, the quirky details…. I could happily walk it all the time (and I still wish I had pursued the funky house that came available last fall, but more on that in a bit).

For this outing, I started at Santa Barbara Street, after a visit to C’est Cheese, and stayed on the south side as I headed east (moving to the north side for the return), mainly so I wouldn’t have to cross the street over and over again. An added benefit to this strategy is that you can see details on one side and the bigger picture on the other—which is handy considering how many of the buildings between Santa Barbara and Laguna are above street level.

This is what I mean by the mix of architecture: the Legal Aid Foundation’s sweet cottage, Vining Construction’s midcentury-modern office, an old adobe, a stone garage….

Not all of it is good, of course.

222 E. Canon Perdido is one of two large developments on the street. From a report submitted to the city: “The applicant, 222 East Canon Perdido Street LLC, proposes to construct a three-story, seven-unit residential project on the property which is currently developed with a three-story commercial building built in 1978 to the design of Don Sharpe. The commercial building would remain and be converted to office condominiums.”

There were two properties on the street that we looked at during our house hunt. One is still available: 310 E. Canon Perdido is half of a building tucked off the street; you can enter through the wooden door or just walk down the driveway. It would make an excellent pied-à-terre, but perhaps the price ($2.5 million) is still too high for that.

And then there’s 331 E. Canon Perdido, which is nothing special from the outside and truly fabulous inside. Or at least I think it could be—and someone else must have agreed, because it sold in October for $1.966 million, well over the $1.7 million asking price. The listing photos are here.

West of Laguna, the street gets a bit less fascinating. I was delighted to come across paperwhites in the wild, so to speak, along with this row of bungalows and the cannon outside the Santa Barbara National Guard Armory. The latter complex has either become part of Santa Barbara Unified School District or will be.

Approaching Milpas, things perk up with architect Jeff Shelton’s Small Cow House at 805 E. Canon Perdido. Here’s a video tour of the inside.

The second big development is Plaza Riviera at 835 E. Canon Perdido. Developer Presidio Capital Partners has a page on its website about the “41-unit upscale multifamily project,” along with more renderings. I wouldn’t have minded a more interesting design; this street can handle it.

835 is also the address of the building housing Bossie’s Kitchen and the offices of McConnell’s Fine Ice Creams. Shame on the vandal who defaced the cow—and, really, is that the best he/she could come up with?

East of Milpas is all residential. After East Street veers off to the left, the street continues for a tiny bit, but the “dead end” warning spray-painted on the street seemed like a good moment to turn around.

The view to the east isn’t too shabby, either. 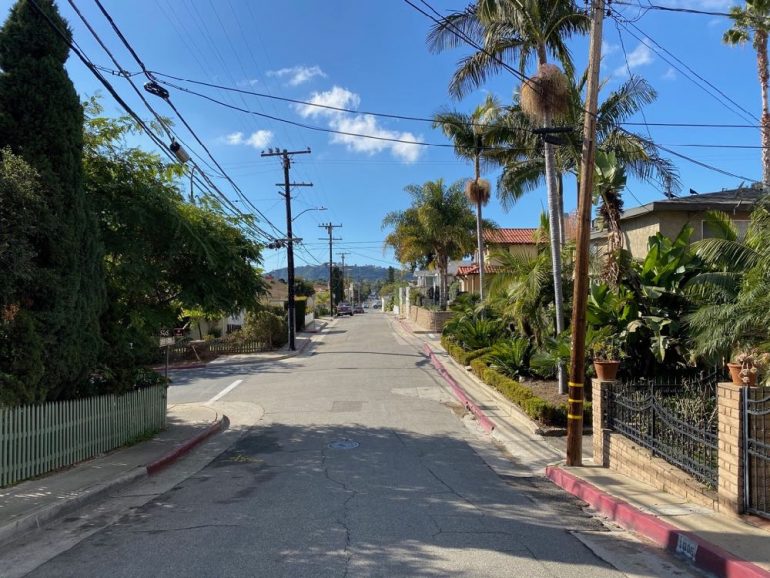 On the way back, details caught my eye—and, again, you absorb so much more when you walk than when you drive. For instance, I had never before noticed the entrance to Randall House Rare Books, in a 19th-century adobe on Laguna just below E. Canon Perdido. I was running short on time, so I saved it for another visit.

I have such affection for El Caserio, an enclave on the north side of E. Canon Perdido, west of Garden Street. If you’ve never strolled through it, you really must. Here’s an Architectural Digest article on one of the houses. 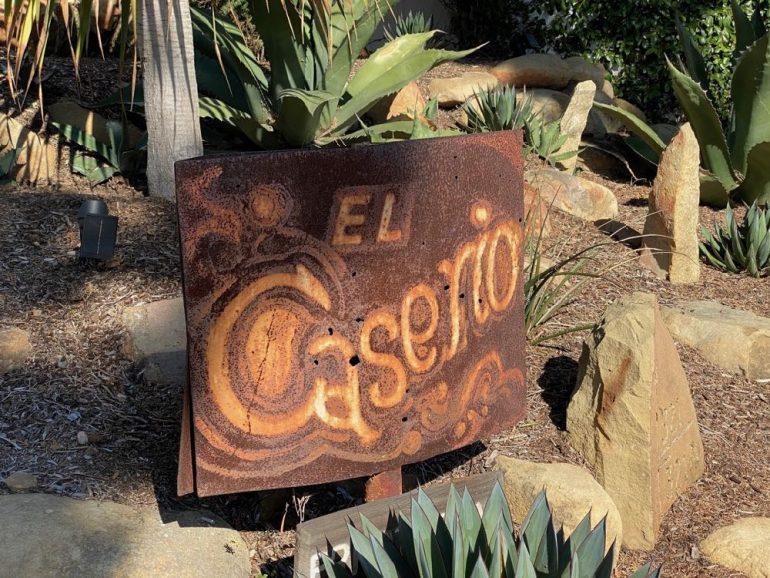 Exiting onto Garden Street, I spotted a truly impressive misspelling.

Before I knew it, I was in the heart of downtown—the Presidio, the Lobero Theatre, yet another wine-tasting room…. 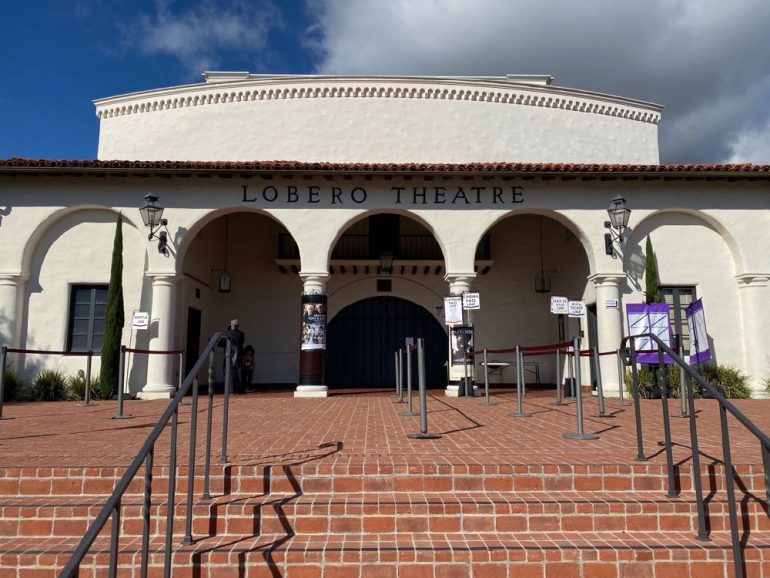 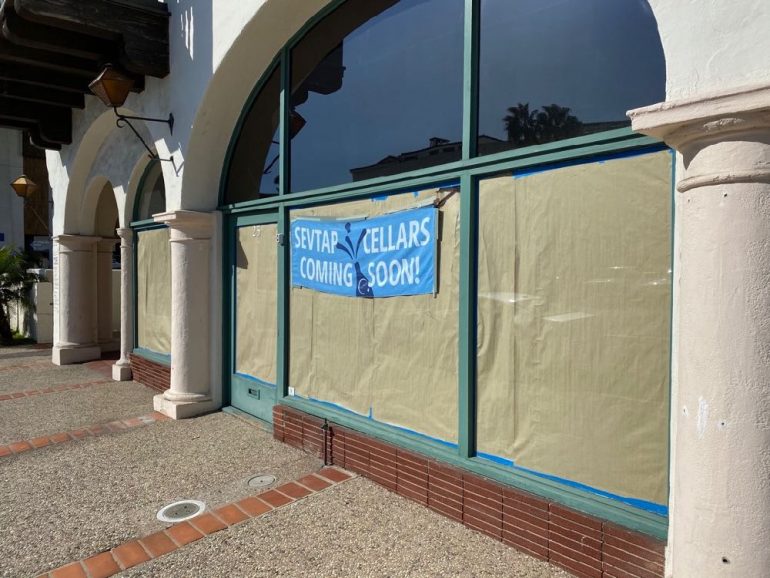 Across the street is one of my favorite old buildings, which has somehow survived amid a rising sea of parking lots. Float Luxury Spa is a lovely place for a massage, and Madame Rosinka has what might be the best office in town. She also has one on Stearns Wharf, as well as in Millbrae and Studio City. So many places to throw your money away! 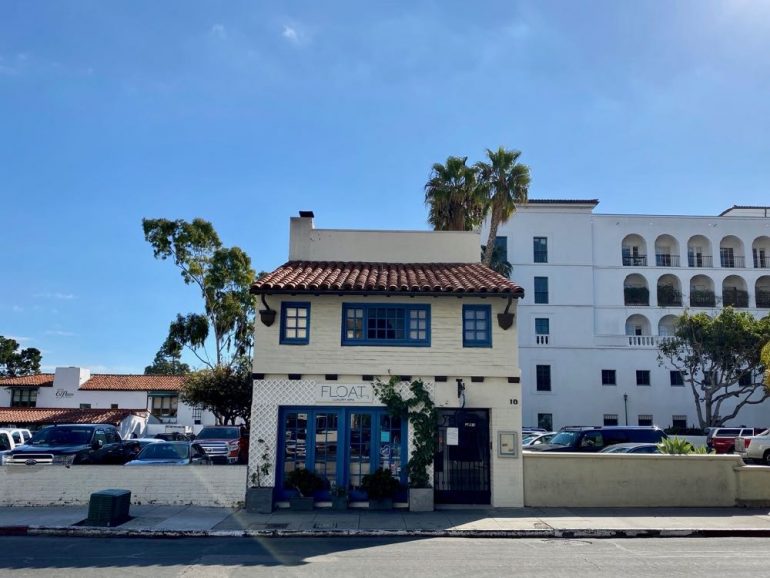 I always stop into the post office, even if just to admire the architecture.

I’ve never been inside the Presidio proper—I will, someday—but I did stop into El Cuartel, across the street. It’s “the oldest standing residence in California, built [in 1788] as quarters for Presidio families.”

Is it just me, or does this guy look like Adam Driver?

And I think this orange tree exists just to taunt visitors from colder climates. 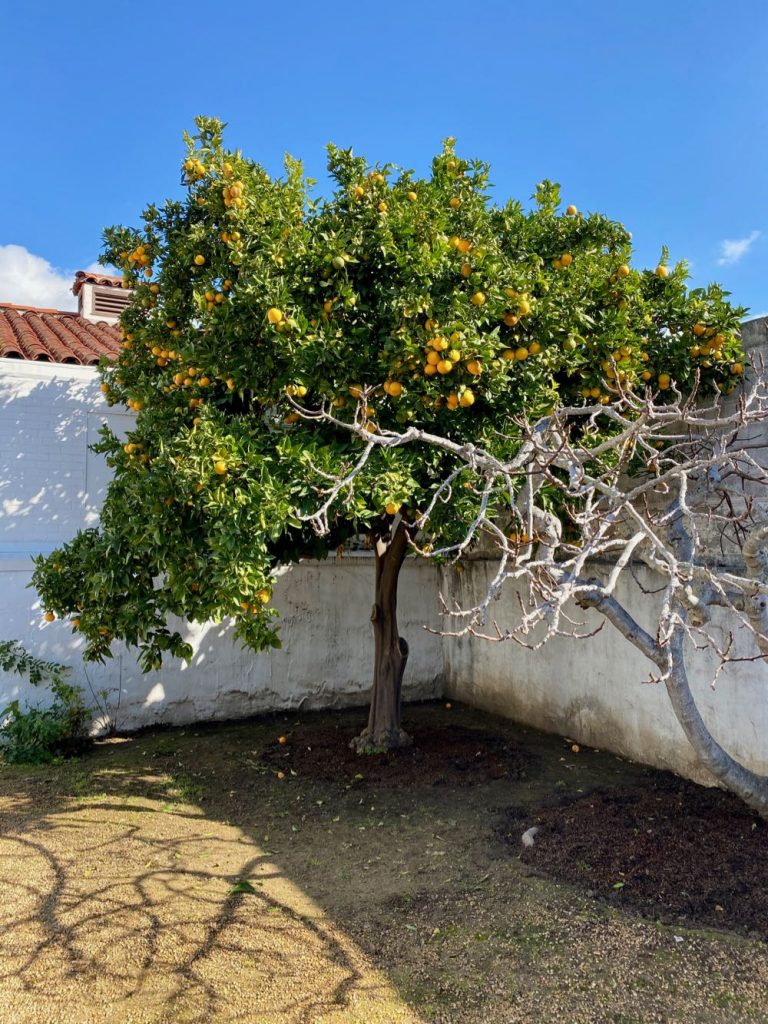 Informational signs explain that the area was once home to Old China Town and Japantown. The tilde on “Cañon” is interesting; I wonder when the street name lost it. 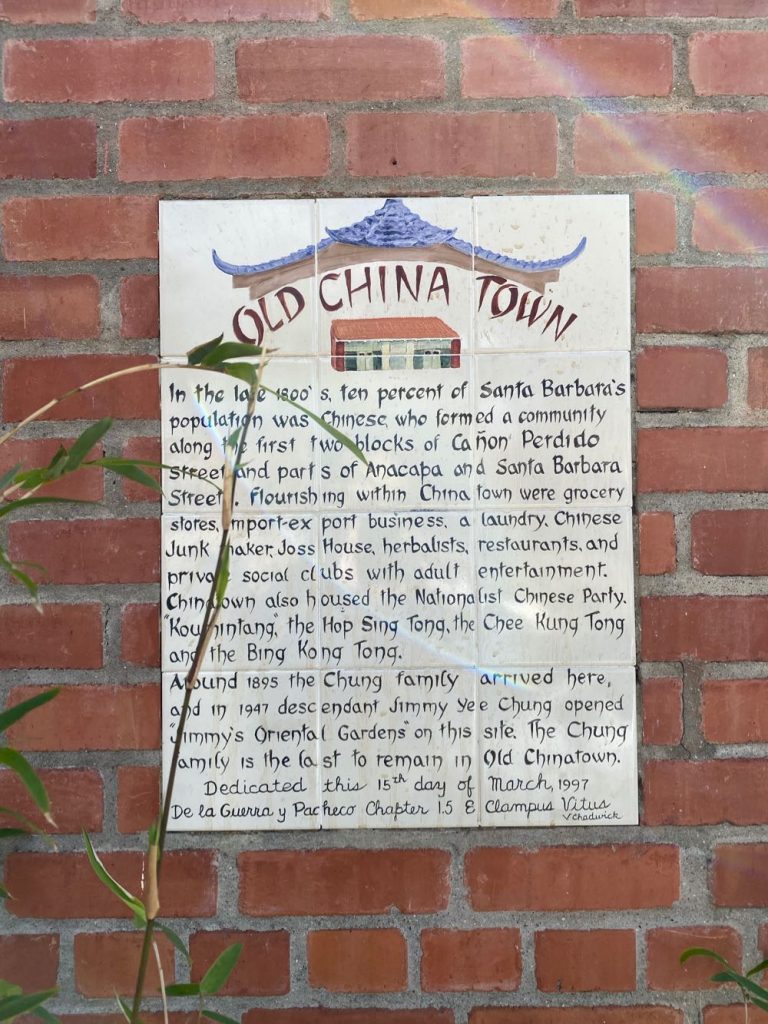 Restaurant Guy says a French bakery is opening at 130 E. Canon Perdido. Actually, he says it’s at 34 E. Canon Perdido, but he means 130 if he’s talking about the former Miso Hungry space. Whatever! If they make a quality croissant, I’ll be back.

Know of a street that warrants a close-up? Email [email protected]

I’m liking these walking posts, especially this one touching on the Presidio Neighborhood. I often allow extra time to walk instead of driving from my home in San Roque if I have business or an engagement downtown. 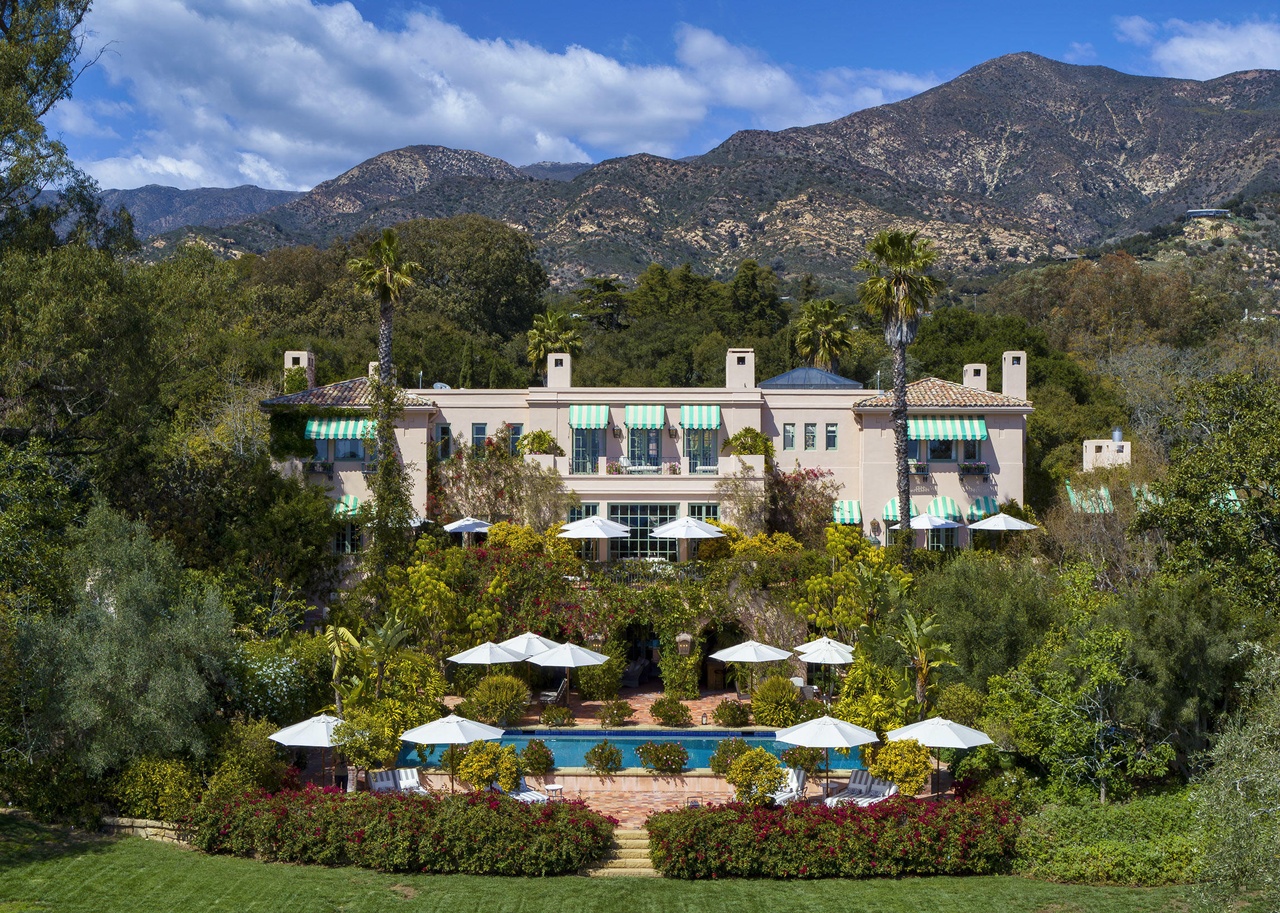 The question is , who is N aka NOME Seen many pieces all over town Nice to spot them — Raul B

No, but there could be one there, too…. — Erik Torkells

It’s time for the government to back off. We were sold on vaccines by the idea we would “return to normal life”. Now that everyone… — Jasen Edwards

<a href="http://www.billdeweyphoto.com" rel="nofollow ugc">Bill Dewey</a> is very talented fine art photographer and may have some B & W pieces of architecture. — Dawn Lafitte

No get the vaccine or move aside and deal with the consequences. It’s pretty simple. — Pete

I can't believe people are so frightened of a little piece of fabric. Our country is showing itself to be proud of its ignorance and… — Jilian

No, no way. There's only one business owner in SB that wants me to put on a mask, and I respect him. But seriously, it's… — Dan O. Seibert