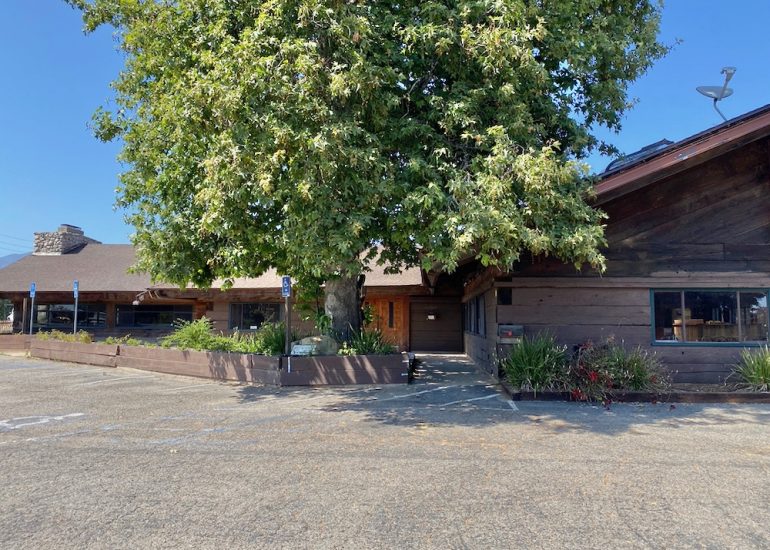 I was wondering if you can do some digging on the historic Timbers Restaurant in Goleta, right off the 101. I believe it’s owned by Sandy Boyd, who founded two chain restaurants/cafes in California: Espresso Roma and Fresh Choice. (He owns a beautiful residential property in the hills above Berkeley that I toured as a potential wedding venue in 2016, and he mentioned that he’d bought the Timbers when we met.) Five years later, nothing much seems to have been done with it, at least from what you can see from the highway. I’ve heard it was a beloved institution back in the day. Maybe there’s an interesting story here? —S.

There is indeed. But first, some history. From a 2015 Noozhawk article:

Built in 1953, famously with oil-streaked timbers procured from the nearby Ellwood Pier, where a Japanese submarine shelled the oil platform a decade earlier during World War II, the restaurant has seen several iterations over the years. It’s also been intermittently empty—the state it’s maintained since 2005. A new developer hopes to revitalize the property at 10 Winchester Canyon Road near Highway 101, planning an organic farm for hands-on vegetable picking, a local market, bakery, commercial kitchen and a reopening of the historic Timbers Restaurant. Montecito resident Sandy Boyd of the former Fresh Choice Restaurant and Espresso Roma Café chains has a lease on the property, and he’s hired Jeremiah Higgins and his team at HJL Hospitality Advisors to get the job done.

Unfamiliar with the property, I drove over to take a look, and the interior is definitely rich with character, as you can see below. Then I reached out to Jeremiah Higgins, who said he’s no longer involved with the project and passed along Sandy Boyd’s email address.

Boyd—who is not the owner, but a leaseholder—said Timbers would open sometime this summer. I asked whether the plans were the same: would there be a farm, market, bakery, commercial kitchen, and restaurant? He explained that the city of Goleta won’t let him farm the land—and insists he remove all farm equipment and till under the current strawberry crop—because the land is not zoned for agriculture. The city offered to allow a “community farm,” but the property’s owner is justifiably worried that the land could get zoned down in the future, and he hopes to build a hotel there one day.

As a result, said Boyd, “The Timbers Roadhouse will be offering more of the Salon style menu with sit-down dining, along with catering and special events.” He has a new operating partner, whom he declined to identify but said currently operates in Santa Barbara.

I asked around, and J. reminded me that the Restaurant Guy recently posted a rumor that Woody’s BBQ might be opening in the Timbers space. So I called Woody’s, and the person who answered confirmed it. After I asked whether the food would be along the lines of what Woody’s offers now at its current location in Goleta, she said no, and then she got cagey and told me to call back in a month.

Previous Burning Questions:
••• Will the Dorinda Triangle ever get beautified?
••• Are we no longer allowed on the SBHS baseball field?
••• What does “SBTP” on this post mean?
••• What’s up with the “no e-bike” signs on local trails?
••• Why is Franceschi House in a holding pattern?
••• Why is there a train station inside this State Street storefront?
••• What’s happening with this derelict house in Summerland?
••• Is there a story behind Lucky Penny’s bell?
••• Why is there wood on some power lines?
••• What are these black beetles that are everywhere this spring?
••• Can you explain how sundowner winds work?
••• Why is there a pressure cooker attached to this utility pole?
••• What’s this concrete ramp thing on East Beach?
••• Why does “USA” get written on the street?
••• What are those poles in the ocean near the Ritz-Carlton Bacara?
••• Are people really allowed to set fires in the middle of Montecito?
••• What’s the story with the half-finished lot next to the Montecito Country Mart?
••• Is the bridge over San Ysidro Creek ever going to get repaired?

Interesting….especially all the “cagey” business. I’m glad that something will be going on there, though. It has been a very long time.