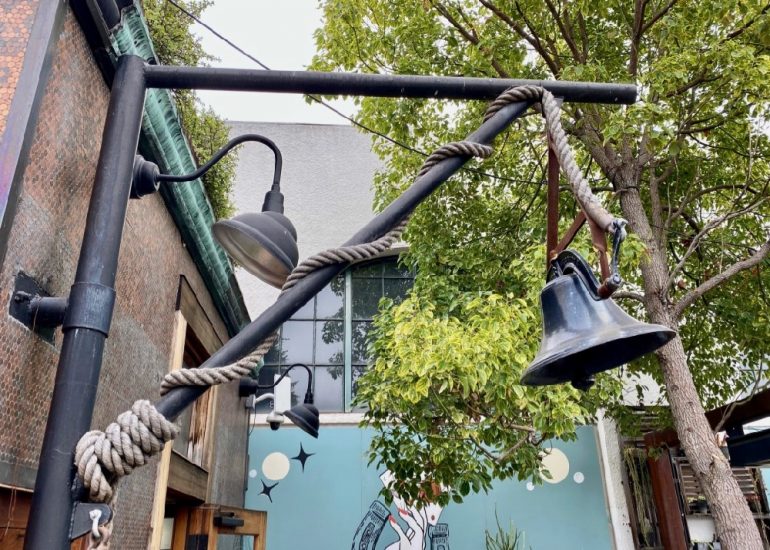 I’ve been to Lucky Penny countless times, but I only just noticed the big bell outside the entrance. Where did it come from? Does it ever get rung? —S.

The only mention of the bell online is in a 2013 press release about the restaurant’s opening: “The hanging train bell dates from 1886 and was used to announce meal times on board.” Hoping for more—and unsure whether that “onboard” refers to the Lark train that ran overnight between San Francisco and L.A. (and from which The Lark restaurant gets its name)—I reached out to Acme Hospitality marketing manager Willie Simpson.

“Antiques always have tales and spotty history surrounding them, and this is the best we could uncover,” he emailed back. “These bells were utilized on farms, schoolhouses, train stations, and other locations where a clear, loud notification needed to be conveyed. They became very popular during the 1980s—to the point where ‘pickers’ were scaling old churches, schools, and farmhouses to claim them in the night. Ours was found and purchased through an online auction. We were told that our Crystal Metal Bell from 1886 was related to the original railroad through Santa Barbara at one of the stations in the region. We believe it was used both to announce the imminent arrival of a train, but also to signal 12-noon, which meant a welcome break and mealtime for local farmers and tradespeople within earshot. This pre-dates the Lark train by many decades but a shared history in rail travel nonetheless. The bell was only rung officially when it was first hung before the opening of Lucky Penny for a small group of employees and friends. It is not used currently but acts as a little Easter egg for those in the know.” Which now includes you and me….

P.S. That 2013 press release and AB Design Studio‘s Instagram posts have more on the Lucky Penny building: it was once the ice box for the Castagnola Fish Company, on the grounds of the former Santa Barbara Fish Market. As for the 15,000-plus pennies on the facade, “It took the team six months to hand-glue each penny onto woven mats backing before the tiles could be affixed to the building. Local high school volunteers from the Multiple Sclerosis Society, Future Leaders of America and Youth Interactive made the tiles in exchange for donations to their respective organizations, raising $1,000 for each charity.”

Previous Burning Questions:
••• Why is there wood on some power lines?
••• What are these black beetles that are everywhere this spring?
••• Can you explain how sundowner winds work?
••• Why is there a pressure cooker attached to this utility pole?
••• What’s this concrete ramp thing on East Beach?
••• Why does “USA” get written on the street?
••• What are those poles in the ocean near the Ritz-Carlton Bacara?
••• Are people really allowed to set fires in the middle of Montecito?
••• What’s the story with the half-finished lot next to the Montecito Country Mart?
••• Is the bridge over San Ysidro Creek ever going to get repaired?