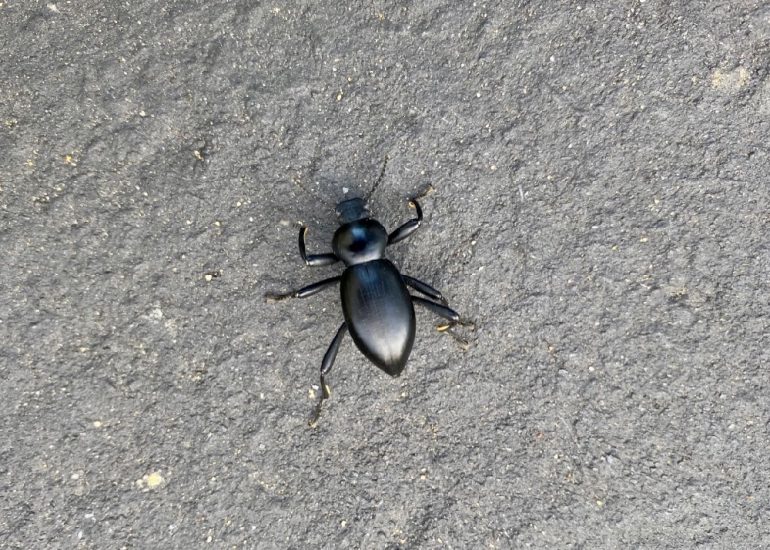 What are these black beetles (stinkbugs?) that are everywhere this spring? I don’t remember them from previous years, at least not in these numbers. And does nothing eat them? They would seem to be easy prey, since they meander around so slowly and often end up on their backs with their legs wriggling. —R.

I passed the question along to the Santa Barbara Museum of Natural History, which shared the photo with its beetle expert, Schlinger Chair and Curator of Entomology Matthew Gimmel, Ph.D. He said that this particular beetle is not the stink beetle most frequently found in the museum backyard (those are in the genus Eleodes), but another common stink beetle. Here’s the museum’s full response:

“This is Coelocnemis magna, a relatively common stink beetle in our area that is actually convergent in form and habits with the so-called desert stink beetles of the genus Eleodes, although both belong to the gigantic (>500 species in California) family Tenebrionidae, or darkling beetles,” wrote Dr. Gimmel. “These can be distinguished from Eleodes by the rows of golden setae (hairs) on the insides of the tibiae (just above the ‘heels’) of each leg. These beetles are herbivore scavengers (they eat pieces of dead plants and other dry organic matter) and tend to be relatively long-lived for beetles, which is characteristic for well-armored species living in deserts (and those in dead wood).” Pressed for details, Gimmel said they may live up to two or three years (it hasn’t been specifically studied), whereas most beetles’ entire life cycles span a year or less. “Like their distant Eleodes relatives, these flightless beetles also secrete foul-smelling liquid from their rear ends, which they do not hesitate to shove towards your face when they feel threatened.”

Gimmel has not heard of a recent local boom in this species: “I don’t know if 2020 is a bumper year for Coelocnemis magna. This is actually the first report I’ve gotten of them this year. Incidentally, they can be found active almost any time during the year.”

“As for what eats them, I don’t have all the answers there, but I know foxes and coyotes are predators of other darkling beetles. As you can imagine, most potential predators do avoid them, since they are not only distasteful, but also extra crunchy!” We did not ask if he knows the latter from personal experience.

A hearty thanks to Dr. Gimmel and the Santa Barbara Museum of Natural History! Everyone is encouraged to submit insect sightings and questions to the museum on Instagram and the Ask a Curator page on its website.

Hungry for more (so to speak) about the beetle, I found supplemental info on Eleodes on the DesertUSA website, including this about its defense tactics.

When alarmed they stand on their heads by bending their front legs down and extending their rear legs. Depending upon the species, they exude an oily, musty secretion, which collects at the tip of the abdomen or spreads over posterior parts of the body, or they eject the reddish brown to brown secretion as a spray. Larger desert species, like E. armata and E. longicollis, can spray 10 to 20 inches. Most species can spray multiple times, if necessary. The spray is not painful unless you get it in your eyes or mouth, where it is painful, burning and temporarily blinding. It does not wash off.

Good to know next time I go in for a close-up. There was also this about its predators:

Grasshopper mice, however, get around this problem by grabbing the beetle, jamming its behind into the sand, and eating it head first. Other predators include burrowing owls, loggerhead shrikes and another well-known stinker, skunks.

Previous Burning Questions:
••• Can you explain how sundowner winds work?
••• Why is there a pressure cooker attached to this utility pole?
••• What’s this concrete ramp thing on East Beach?
••• Why does “USA” get written on the street?
••• What are those poles in the ocean near the Ritz-Carlton Bacara?
••• Are people really allowed to set fires in the middle of Montecito?
••• What’s the story with the half-finished lot next to the Montecito Country Mart?
••• Is the bridge over San Ysidro Creek ever going to get repaired?