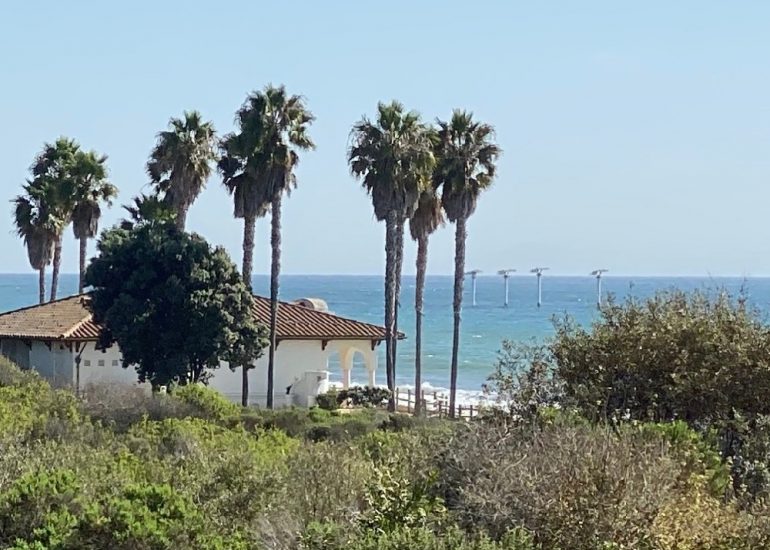 During lunch at the Ritz-Carlton Bacara, I spotted these four columns just offshore. I only recently moved here, and maybe this is obvious to people who’ve lived here longer, but what are they? —A.

According to a rep for the resort, “The columns are remnants of an old pier. Over time, seagulls used them as a place to nest. Local nature conservancy groups fought to keep the beams intact so the seagulls can continue to inhabit them.”

Here’s a 2017 Noozhawk article about the efforts to clean up “relics of the area’s booming oil-production past. […] Goleta’s oil- and gas-production boom came in the early 20th century, and when the companies behind it packed up and departed, they left much of their infrastructure without much clean-up or disposal.” Below, a photo from the Goleta city archives.

Previous Burning Questions:
••• Are People Really Allowed to Set Fires in the Middle of Montecito?
••• What’s the Story With the Half-Finished Lot Next to the Montecito Country Mart?
••• Is the Bridge Over San Ysidro Creek Ever Going to Get Repaired?

I was golfing Sandpiper and one of my friends, a pilot, saw them and said they are guides for planes flying into SB Airport. It makes more sense than remnants of a pier- those columns are really, really high. It doesn’t seem to be the right scale for an old pier. I wonder if SBA might disabuse us of this theory.

I think that's the Carpe Data office window on the 3rd floor. The Lululemon building, on state and De La Guerra. — Rita

All those homeless will probably just move up the block a few feet to Starbucks. — Ella

Where will all the filthy folk go now? — Christine!

Food news: An intriguing rumor about the former Cava space; Mangione’s Italian Ice Co. is open; See’s Candies is working on a Goleta shop; the Red Pepper outpost on De La Vina appears to be off; a profile of Hungry Planet, one of whose founders lives here; don’t forget about the Dart Coffee garden. Details at SitelineSB.com ...