••• An L.A. Times article on Erewhon, the popular chain of markets, says that Santa Barbara might be getting one: “A 2019 investment by New York private equity and venture capital firm Stripesm […] helped ramp up the pace. A Beverly Hills Erewhon is next, with a scheduled launch date of summer 2022, and then Culver City later in the year; Pasadena is in the works for 2023. After that: possibly downtown L.A. and Glendale, and then a wider Southern California expansion—Newport Beach, Laguna Beach and Santa Barbara are high on the list, though no leases have been signed—before moving up to the San Francisco Bay Area.” I’ve emailed the company to find out whether it’s actively looking or just planning on looking. The conundrum here is location: there are no large spaces with ample parking near Montecito, which is the likeliest target demographic, and the western side of Santa Barbara is already saturated with supermarkets. Maybe in the industrial part of East Beach…? Or, if parking isn’t a concern, the Restoration Hardware space on State Street?

••• Related: I hadn’t been to the BevMo on State Street in a while, but it’s now as much of a supermarket as a liquor store. Evidently, the company was bought by the GoPuff delivery service late last year. From a TechCrunch post about the acquisition: “GoPuff can now promote its delivery offerings to BevMo’s brick-and-mortar customers. The company also says it will integrate some of BevMo’s brick-and-mortar stores into its microfulfillment network, while not changing the customer experience in stores.” The experience has totally changed, unless Bevmo always carried Monistat and I just didn’t know it. 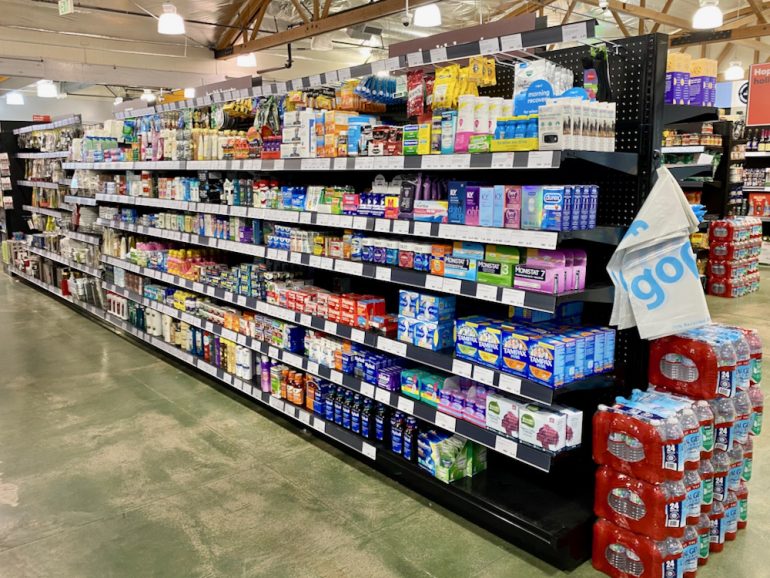 ••• The new issue of Montecito Journal’s glossy magazine—the one with real estate developer Rick Caruso on the cover (!)—reports that the name of the restaurant and bar coming to two spaces at 1187 Coast Village Road is Local, and Mesa Burger restaurateur Chris Chiarappa is involved in the project. Local’s website says that the restaurant expects to open early next year; below is how the interiors look now. 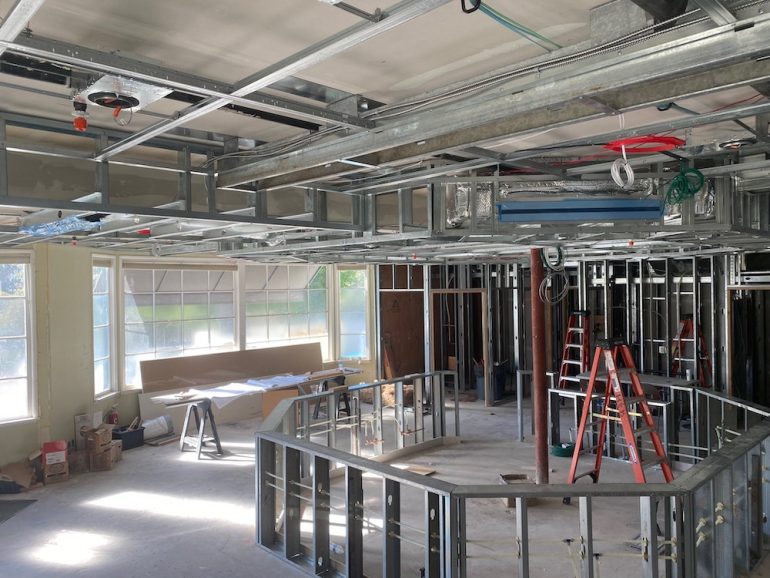 ••• Timbers Roadhouse tells Restaurant Guy that the restaurant “no longer refers to its bar as Whiskey Joe’s. Now the bar area is part of Timbers Roadhouse and offers the same menu as the dining room, which has an updated menu with lower priced options.”

••• 805 Foodie reports that the Root 246 space in Solvang is being taken over by the Crafthouse Group, which has restaurants in San Luis Obispo and Santa Paula: “The new restaurant will feature elevated comfort food [….] Additional features are planned for the roughly 12,000-square-foot site in Solvang. They include turning the building’s back rooms, previously used for banquets, into a 200-seat, New York–style supper club with live performances, changing menus and, on Sundays, a jazz brunch service.” It’ll be called Corque Crafthouse & Kitchen.

••• My husband and I went to the adorable Izakaya Full Moon in Ojai the other night. Craving Japanese food, and having just had Sushi Bar Montecito and sashimi-grade tuna from Get Hooked, we ordered almost exclusively from the cooked part of the menu: miso soup, salmon skin salad, a bunch of yakitori (chicken thighs, eggplant, shiitakes, shishitos); fried yamaimo, and corn tempura. Everything was terrific except the shishitos, where were jumbo-sized and needed more time on the grill, and the corn tempura is alone worth the drive. If you go in winter and intend on sitting outside, dress warmly—there aren’t many heaters and Ojai is colder than here. P.S. Santa Barbara Magazine has more on the restaurant; flip to page 60. 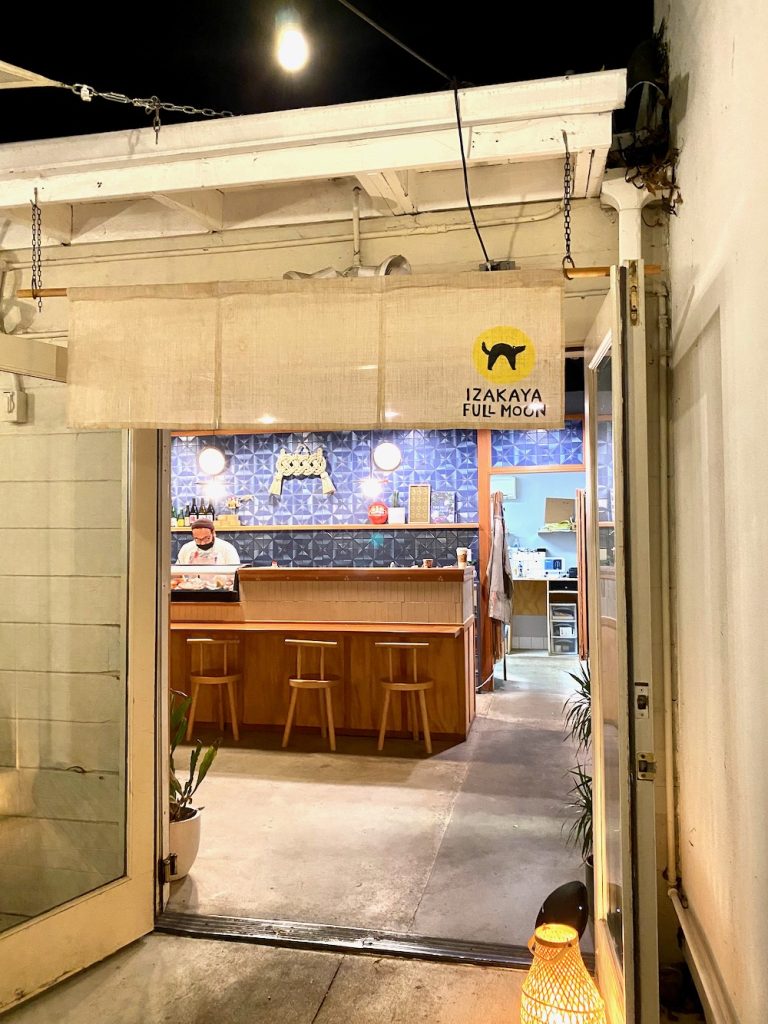 ••• While in Ojai, we noticed that Pinyon is open. The menu is small but intriguing.

If Caruso has his eye on buying the Upper Village Shopping center, that’s where I’d bet Erewhon would end up. I don’t think it would resonate on State Street, unless it was maybe in the Cantwell’s location or something in that area. I’ll take an Erewhon over Bristol Farms any day.

The more I think about it — I’d much prefer a Erewhon over Whole Foods too. Take that spot, please!

I don’t “get” Erewhon. I’m a huge fan of grocery stores; wherever I am in the world I have to check them out. A few years ago when I was in LA I made a point of stopping by Erewhon and even brought a cooler with me. I was expecting stuff you couldn’t find anywhere else. It was pretty blah and didn’t offer anything I can’t get at Lazy Acres or Whole Foods or FM. I saw SB Pistachios being sold for twice the price we can get them for here and local SB honey at a similar markup. I bought some fresh house-made shakshuka sauce, which I realized was expired only after I got it home to SB. The only thing I found that I couldn’t get locally was a specific, novel (to me) brand of organic chicken jerky for my dog. The rainbow juice assortment was instagrammable, I guess, but we all know juice gives you diabetes. A lot of hype about nothing. The LA invasion of SB continues. Gag.

Thanks for confirming my thoughts

Erewhon would do really well in Montecito- perhaps it could replace the Vons. Erewhon is extremely overpriced, but they do have a lot of delicious prepared options. I find Vons to be extremely dated and full of pretty gross processed foods. It would be nice to have an alternative in that area