••• C. recommends that barbecue aficionados try Ruff House Barbecue, popping up at various places, saying that it compares favorably with Priedite Barbecue in Los Alamos. From Ruff House’s Jason: “Our next pop-up is at Island Brewing [in Carp] this Sunday from 1 p.m. to sell-out for their 20th anniversary. After that is Strey Cellars [in Oxnard] on August 15. That’s all on the schedule for now as we have private gigs on the calendar. But we’ll be back at Island soon enough.” (Photo by John Troxell.)

••• And speaking of Priedite, it’s changing things up so that you don’t have to go wait in line and have it for breakfast: “Starting in August, we’ll keep the first-come, first-served BBQ party vibes on the first Saturday of every month—plus a few beverage collabs! Then, on the third and fourth Saturday of each month, we’ll offer pre-order BBQ only. The link for pre-order BBQ will go live during the second week of each month.” I found the barbecue reheated nicely. For updates, follow Priedite on Instagram. (Photo by John Troxell.)

••• Courthouse Tavern, in the former Little Door space at 129 E. Anapamu, is opening August 4-6 (for Fiesta) for drinks and appetizers, after which it will regroup for an unspecified amount of time and then open in earnest.

••• Meanwhile, the long-gestating Riviera Bar on W. Figueroa has a “now hiring” sign in the window, so perhaps it’s getting close. The bar has no online presence that I’ve ever found, so if you see it open, please let me know.

••• The Montecito Wine Bistro has closed for renovation; a sign says it’ll reopen in September. An Instagram post promises “lots of changes,” and heaven knows the Upper Village could really use a good restaurant, so let’s keep our fingers crossed. 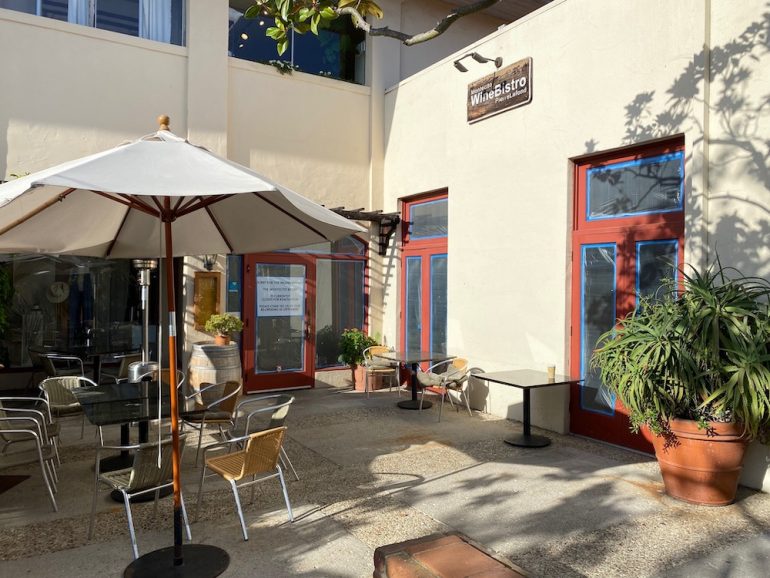 ••• J. sends word that Lafond Winery’s tasting room at 111 E. Yanonali in the Funk Zone has closed, while Santa Barbara Winery is moving from 202 Anacapa Street to Kunin Wines’s former space at 28 Anacapa Street next week. I have a call in to Kunin about where it might reopen.

Cayucos Is an awesome little town. Good luck to its new motel! — Elle

I hope I am not the only person who sees on one hand you are bashing the boat, but jumping up and down at new… — christine!

who has the nerve to attack guests on a cruise ship stopping for the day? A short sighted nincompoop who never drives across town for… — christine!

And there will be a third one on the other side of the 101, where Cabrillo intersects with Los Patos Way. — Erik Torkells

Dueling roundabouts for such a small confluence of streets/onramp seems like overkill, no? — Jonnt

It looks like Restoration Hardware goes away, reduce a reason to attract tourists. Then reduce a bar that draws all the foreigners to downtown. Then… — SBLogic