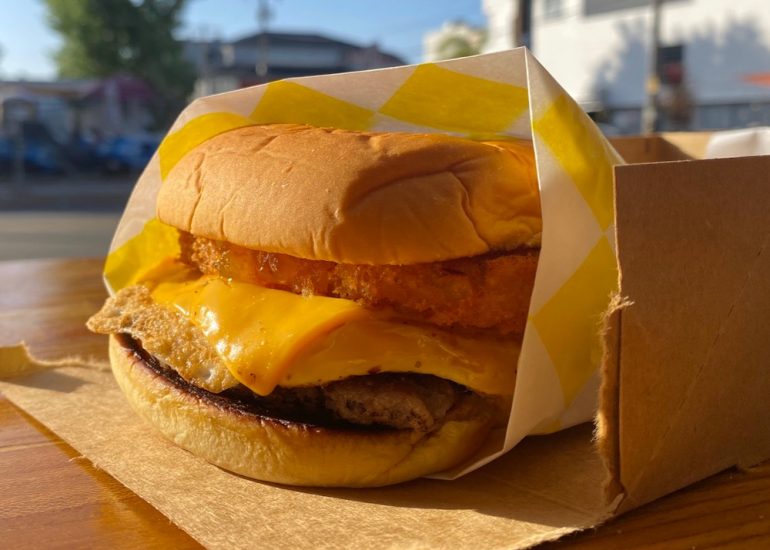 ••• When it’s my first time with a menu, I generally don’t try and customize an order, but I had it on good authority that the smart bet regarding XO Santa Barbara’s new slate of breakfast sandwiches was to get the Dirty Diner with sausage and hash browns. Holy cow, was it good (but you have to be up for the sweetness of the pepper jam). XO is closed Tuesdays and Wednesdays, so you’ll have to wait a couple of days to try it.

••• Chefs and winemakers in the valley are banding together for an event to benefit World Central Kitchen’s efforts in Ukraine. Tickets are $250 but of course you should give more if you can.

••• Low Pigeon‘s last day is this Friday, April 29. (It was bought by Lighthouse Coffee.) UPDATE 4/28: Low Pigeon says its party is not for the public.

••• Augie’s, the Mexican restaurant and tequila bar coming to 700 State Street (at Ortega), is shooting for a mid-July soft opening. As previously reported, Jeff Shelton is designing the space. —Noozhawk

••• The Mar Monte Hotel’s two restaurants—Costa Kitchen & Bar and Café Lido—have a new chef: Gunnar Planter. “Before joining the team at Mar Monte Hotel, Planter opened Ebullition Gastronomy, a fine dining gastropub in Carlsbad, Calif., specializing in dry aged meats and charcuterie, and served as Executive Chef. Prior to that, he opened Viewpoint, a restaurant in Del Mar, Calif., and developed a menu based on coastal Californian cuisine as the Executive Chef, sourcing his ingredients from local farmers and fisherman.” —eHotelier (via Edible Santa Barbara)

••• “A Santa Barbara startup [Mikuna Foods] has raised $5.6 million in seed funding to scale up retail partnerships, fueling the company’s investments in production capacity and growth in the plant-based protein market. […] The main ingredient in Mikuna is chocho, a type of bean sourced in South America in the Andes Mountains. Chocho is the overwinter crop for indigenous farmers in that region and it grows in a cold environment, Kriese said. It is a nutrient-dense plant and is high in protein, iron, fiber, calcium and zinc, according to Mikuna’s news release.” —Pacific Coast Business Times

••• How is it that I’ve bought untold amount of stone fruit from Burkdoll Farm at the Saturday farmers’ market and never noticed it sells Hot Rich Lady preserves?

Burkdoll sells a variety of jams. “Hot Katy” cherry rosemary jam is my favorite. It’s sweet, spicy and the rosemary makes it savory (makes a great duck or salmon glaze). Man-o-man it’s the jam! Tana is the nice lady usually at the market giving free samples (and pictured on the jam label) and the one who makes it. Cherry season has just begun, so expect to see it soon! Can’t wait!