After a blitz of travel over the past 12 months—Greece, Mexico City, Patagonia, Portugal—my husband, Adam, and I had resolved to stay put for a while, mainly to deal with a construction project at home. But first, one last hurrah: a swing through the East Coast.

Back when I lived in New York City, I always thought it would be refreshing to visit as a tourist—knowing my way around like a local, but skimming off just the good stuff. A big part of that involved staying in a part of town other than Tribeca, which we sort of achieved: the Crosby Street Hotel is in Soho, near a lot of the establishments we loved, so everything was both a little familiar and a little fresh. The hotel felt remarkably like the Covent Garden Hotel, a sister property in London that we’re fond of. The room (above) was small and expensive, but the wall of windows dazzled and the water pressure in the shower was extremely luxurious after years of living in a drought.

Beyond seeing friends, all I really wanted to do was walk around, check out Little Island in Hudson River Park, and eat well. The scorching combination of heat and humidity turned every excursion into an endurance test, but I did get out a bit. “That’ll be you one day!” replied my mother-in-law when I posted the photo below on Instagram.

And I finally explored Little Island. Thomas Heatherwick’s design is spectacular. Why can’t more architecture be this interesting? Even the benches show extra effort.

While catching up with people was great, I couldn’t always choose where we ate, so the New York leg wasn’t quite the gourmet binge I was hoping for. Adam and I did make it back to one of our favorite restaurants, Altro Paradiso. Under all that boring-looking fennel is a cache of Castelvetrano olives and provolone, adding up to something amazing. And I went out of my way, on a very hot afternoon, for Morgenstern’s ice cream. The crème brûlée flavor gets a lid of torched sugar. I only wish the sweet little shards could get mixed throughout the ice cream….

We rented a car and drove to the northwest corner of Connecticut, where we used to rent weekend houses. In between social engagements—three in 24 hours—there was downtime at the Mayflower Inn in the town of Washington. Each time we’ve visited the hotel over the years, it has been under different ownership; currently managed by Auberge Resorts, it has never been better. (Auberge is the company running the Inn at Mattei’s Tavern, if it ever opens.) One nice touch: when we checked out, the staffer asked how our stay was—and when we said fine, she followed up with, “Is there anything, good or bad, that stood out?” It showed a genuine desire to improve the experience. (Adam thanked them for the little pitcher of milk in the minibar. It turns Nespresso coffee drinkable.)

On to Providence, where we stayed with friends. The old part of the city makes for satisfying walking, and I added a new warning sign to my collection. But the highlight was a day on the water. Back when the Freedom Boat Club launched in Ventura Harbor, Adam and I briefly considered joining before realizing we’re just not boat people. But our friends are—both boat people and FBC members—so we took motorboat over to Newport, anchored in a cove, ate lunch, and lolled in the water. Heaven. And, later, we had a very good dinner at the newish Bayberry Garden.

Not to pick a fight or anything, but I’ve never found Boston all that interesting. The city does, however, have a terrific new hotel called The Newbury, at the eastern end of Newbury Street, in what was once a Ritz-Carlton. The higher the hotel rate, the more I tend to nitpick, but I was entirely happy with the Newbury. Well, the food at the rooftop restaurant, Contessa, wasn’t special; then again, the view! And the place was a total scene on a Sunday night.

In Toronto, we finally got a break from the oppressive weather—the temperature was 25 degrees Celsius (when in Canada…) and still warm enough to have dinner outside without heat lamps. When the friends hosting us asked what we’d want to do, I said, “Walk and eat,” for I’m nothing if not consistent. The highlights were a stroll through the Rosedale neighborhood, dinner at Rasa, the thrill of Mies van de Rohe’s TD Centre, the views from Canoe restaurant, and homemade cocktails, like the Yellow Cocktail (equal parts lemon juice, Yellow Chartreuse, Suze, and gin) from David Lebovitz’s Drinking French, which our friends have worked their way through during the pandemic and which I think we’ll need to buy. 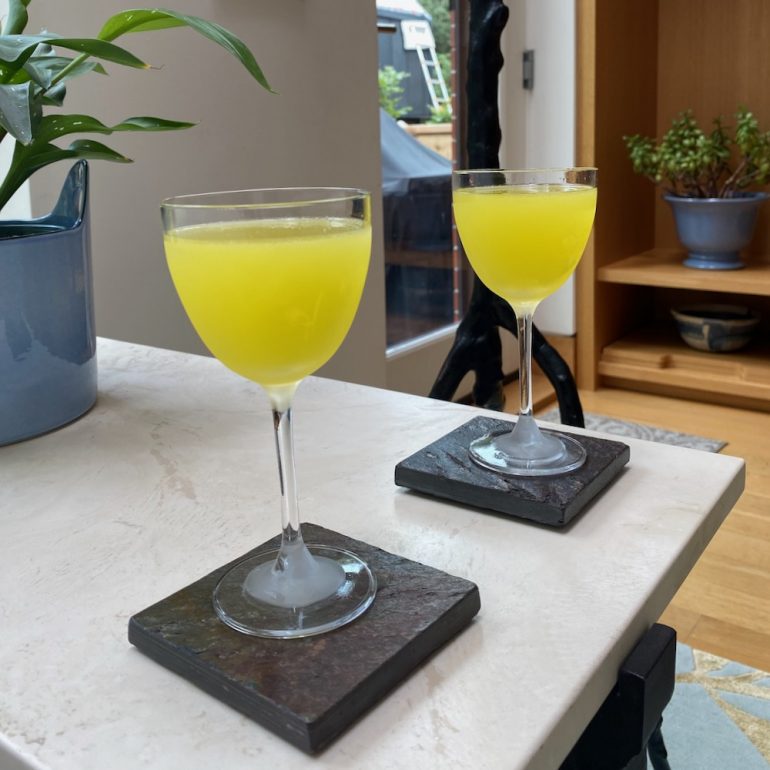 Over the course of the trip, our construction project fell apart, which did cast a pall. The bright side: more travel? I’ll drink to that.

Previous travel coverage:••• Why Is Everyone Going to Portugal?
↓↓↓ Patagonia Made Easy
••• A Quickie in L.A.••• From Penthouse to Pavement in Mexico City••• Do Greek Islands Live Up to the Fantasy?••• Splendid Isolation at Utah’s Lodge at Blue Sky••• The Three Reasons to Visit Paso Robles Now••• The Rebirth of the Cuyama Buckhorn

As always, I love your writing and willingness to take us along on your adventures. Thank you.