I intended to include travel coverage on this site from the start, given my background as a certified travel expert, but the pandemic had other plans. My husband and I finally got out of the country—to Greece—and while I’m not sure how this write-up will feel among all the hyperlocal content, why not run it? It’s kind of like a Walk With Me post, but somewhere else.

Greece seemed like the perfect Covid destination, because once you leave Athens, you’re generally outside. And while the many forms and tests involved in international travel these days are a hassle, once you’re actually in transit, it’s all pretty easy. That said, wearing a mask for 20-plus hours—waiting at LAX, on the flight to London, waiting at Heathrow, on the flight to Athens, in the car to the hotel—was pretty gross. And trying to sleep with an eye mask and a face mask feels ridiculous, like you’re dressing up as a mummy for Halloween.

We stayed in Athens at the beginning and ending of our trip. No one I talked to about the trip beforehand was enthusiastic about Athens, and perhaps we were just desperate for big-city action, but I rather enjoyed it. The city is no beauty at street level, I’ll grant you that, but how can you not admire the way the Acropolis sits on a mesa right in the middle of town? Below is the view from the restaurant atop the AthensWas hotel, where we had breakfast each morning.

We hired a guide for a tour of the Acropolis on our first full day, which was a smart move. There’s simply too much history to absorb on your own. (Not that I remembered any of it.)

Even more than the ruins, what struck me were the views. The city sprawls out around the Acropolis, and without the bustle and noise, it’s gorgeous.

The narrow streets around the Acropolis are irresistible, even if the businesses are almost entirely aimed at tourists.

And the original Olympic stadium is spectacular, particularly at night.

We dutifully went to the Acropolis Museum, but as a devoted sightskipper, much preferring wandering amid the locals than hanging out at the same places every traveler visits, I quickly grew bored.

I don’t remember how we decided on the two islands we visited—Sifnos and Antiparos—other than the goal was less-touristy islands that were still easy to get to. First, we took a ferry to Sifnos, where we stayed at the Verina Astra. It’s small, maybe 20 rooms, with a restaurant and a pool and nothing else—except some of the most amazing views you’ll ever see. We stayed in one of the fancier rooms, which had its own pool, but I don’t think we’d do that again. For one thing, the outdoor area (including the pool) was exposed to the neighboring room, and the pool isn’t heated, so we barely used it. 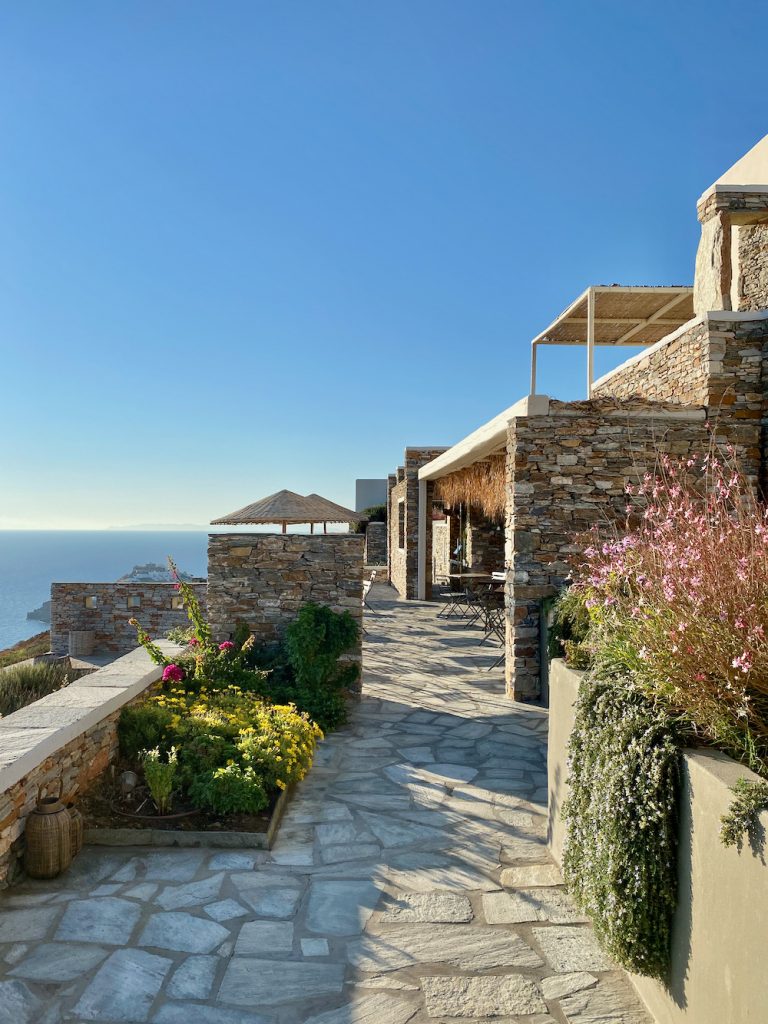 The hotel’s food was extremely good, better and much more interesting than almost everything we had in Athens. (Below: a dish of “semi-dried zucchini,” which sounds like something you should avoid but was actually fantastic.)

Below the hotel, on the way down to the beach, is one of the island’s many—and I mean many—picturesque churches.

What we didn’t know about Sifnos till we got there—and what made us fall in love with the place—is that there’s a network of trails around the island; only in recent years have they been marked.

The locals thought we were bonkers when we told them how we walked and walked and walked—11 miles—to a beach and then a fabulous lunch of fresh fish at To Limonaki and then back to the hotel. If you like walking, I can’t recommend the island enough.

As in Athens, cats were everywhere. This one would’ve jumped in my lap if I had let it.

And from the hotel, you can walk to the town of Kastro—that’s it in the distance in the first photo below. We went in the morning, before anything was open and any tourists had arrived, and it was magical. Next time I will make a point of swimming in the cove off the church.

Friends who had been to the two islands recommended a private boat transfer between them, saying it was a highlight of their trip. For us, it was a borderline disaster: the wind kicked up, so we had little choice but to sit and get lashed by the spray. I think Adam can laugh about it now, but I haven’t brought it up, so who knows.

Anyway, on Antiparos we stayed at a brand-new resort called The Rooster, founded by Athanasia “Comninos, a stylish mother of two [who] left a career that included interior design, a stint at Vogue Greece, and working for her family’s shipping company to focus on this passion project seven years ago” (Town & Country). She clearly has exquisite taste, for the hotel is the prettiest one I have ever stayed at. It positively makes love to the camera. (Yes, there were other guests there.) 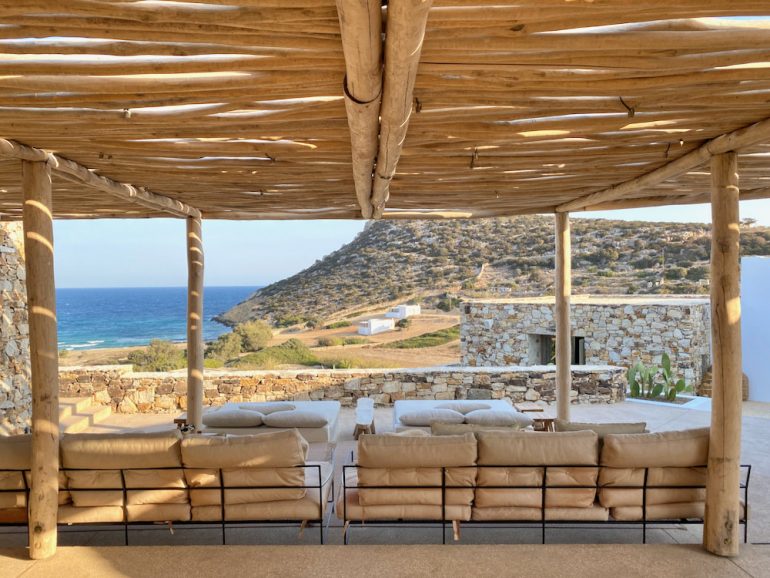 The rooms are all individual buildings. Despite the pretty view, ours was not one of the best ones, we discovered too late. Inexplicably, the hotel was designed with the main driveway winding among many of the rooms, and ours sat right on the road, without enough screening. What’s the point of a private pool if you can’t swim naked? 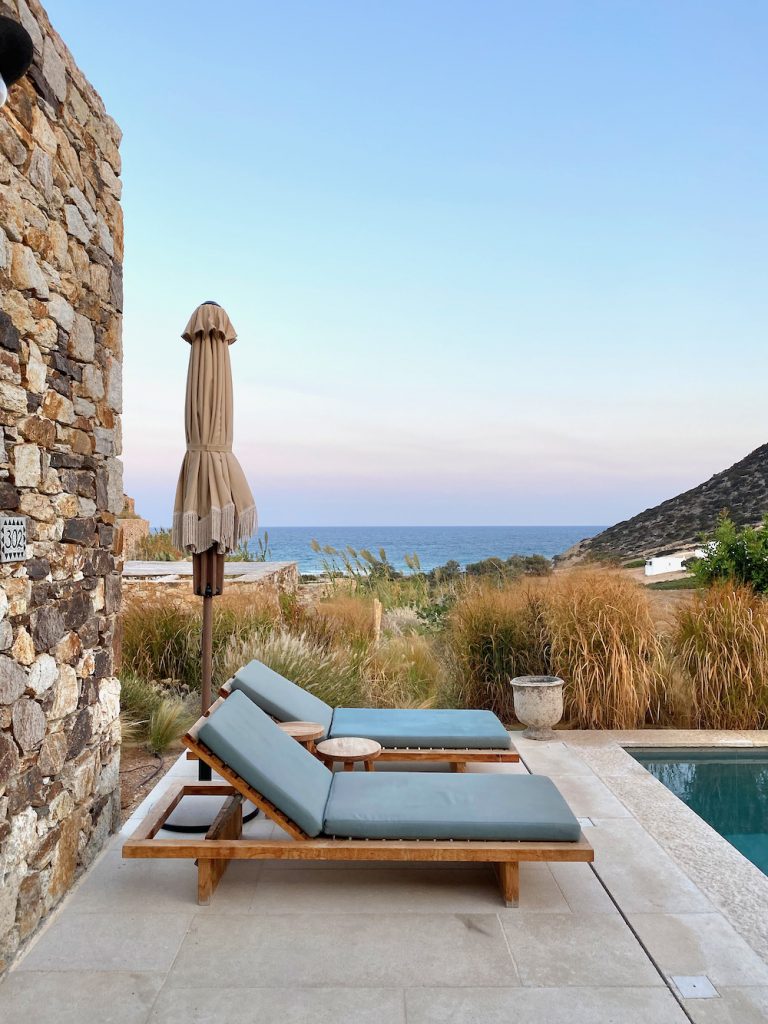 One thing we have yet to learn is that when you live somewhere beautiful, traveling to somewhere beautiful is not enough. Which is another way of saying that one island might have been enough for us, and/or that we should’ve rented a car, because there’s nothing to do at the hotel but go to the spa (had a nice massage) and the beach (too much garbage washing up). Antiparos lacks the trail system of Sifnos, but there is one that goes from the Rooster, through a quarry, and over a hill to a stunning cove. 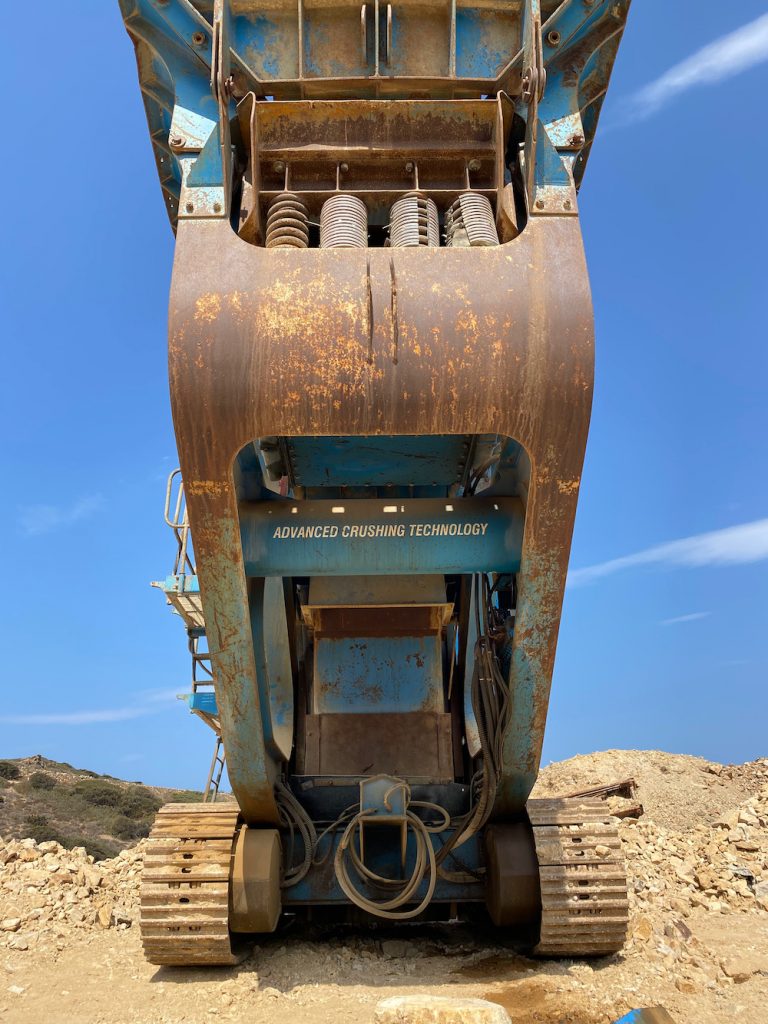 One last thing about the Rooster that stuck in our craw: the tap water is undrinkable (“I wouldn’t give it to my dog,” said a staffer), but the hotel doesn’t offer any filtered water for free. So if you want water outside of a meal and turndown, your lone option is the €4 bottle in your minibar. Having to ration drinking water while you’re at a fancy resort kills the buzz.

We returned to Athens via a flight from Antiparos’s larger sister island, Paros. This time we stayed in the Kolonaki neighborhood, which while farther from the Acropolis, was more upscale and very photogenic. Here’s something you may not know about Athens, and people don’t tend to tell you: the plumbing is very old, so it’s not uncommon to see a sign above the toilet, even in your hotel, insisting you place used toilet paper in the little receptacle nearby.

We went to the National Archaeological Museum, mostly because we felt we had to. It has a lot of very old things. I’m no philistine, but it’s just too much. After about 15 minutes, I paid more attention to the nudes. The ancient Greeks were callipygian enthusiasts.

With that crossed off the list, we were free to do what we love to do, which is wander. Walking and observing makes me feel alive—and feeling more alive is one of the main reasons I travel. Forced to recap what we did in Athens, I have to admit that we ran errands: we tracked down an English bookstore, so I could get something to read on the way home. We went to the central market where we bought capers (and I saved a man’s life, but that’s a story for another day). We hunted down a souvenir for my niece. And we took photos of stuff most people would find unnoteworthy. 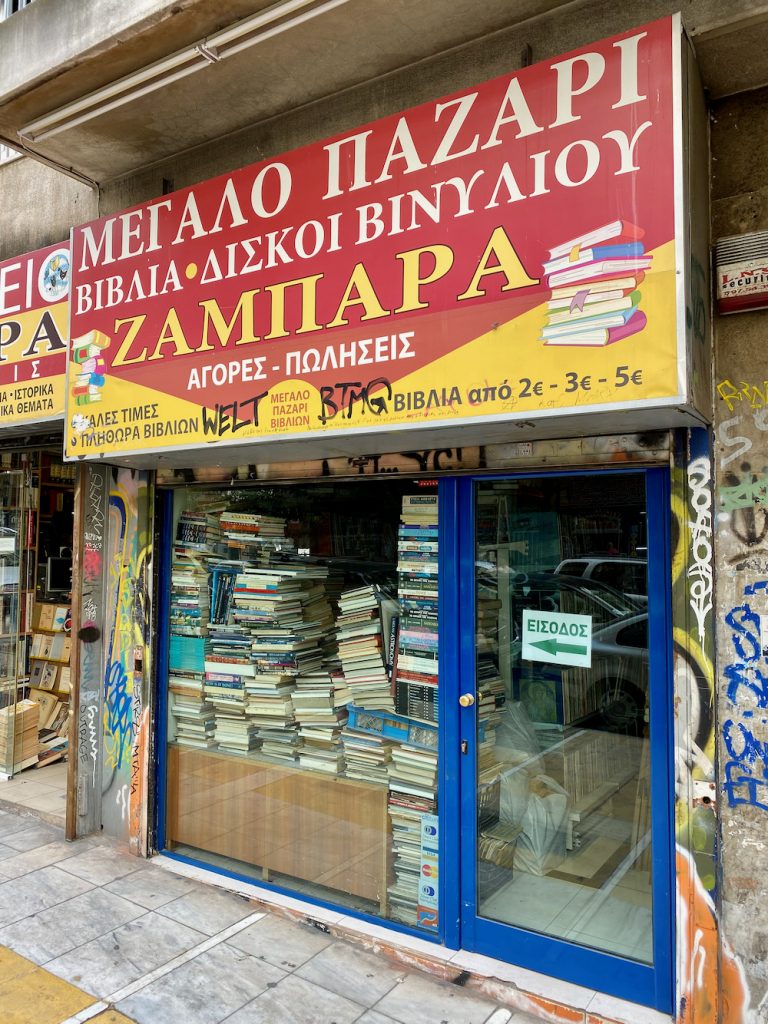 We make a point of visiting a supermarket whenever we’re in a foreign country. On this trip, we bought oregano-flavored Lay’s—like sour cream and onion, but better—and toothpaste that was a cultural experience in itself. The round part at the top was rubber, and you had to push it to get the toothpaste to come out the flat end. Also, it was rosemary-flavored.

One place we happened onto by accident was Ergon House, a hotel with a deli on the ground floor and a restaurant on the roof. While most of what we saw in Athens was a bit dusty and tired, Ergon House felt like it could’ve been in any European capital.

It’s a running joke in our relationship that I try to find the up-and-coming neighborhood in every city; my sweet spot is where grit and gentrification overlap. We found it at Provoleggios, site of the best meal we had in Athens. The menu was all over the place, and the highlight was a heavenly piece of fried fish. That’s me, by the way, for those of you who have never made it over to this site’s About page.

It seems appropriate to end with a sunset—this one as seen from the top of Lycabettus Hill. No matter what happens to me in this life, I know one thing: I will never pass up the chance to ride a funicular.

You might also like:
••• Splendid Isolation at Utah’s Lodge at Blue Sky
••• The Three Reasons to Visit Paso Robles Now
••• The Rebirth of the Cuyama Buckhorn, a Classic Roadside Motel

Okay, I feel as though I just took a trip to Greece – Thank you! Love, love your travel log!

You can’t spell funicular without “fun”!

I’m so glad you created Siteline. I find it a great source of info for things I’m interested in (e.g. restaurants and real estate). Am also enjoying your travel blogs. I was in Athens and Paros this past summer and took a day trip to Antiparos. The first thing that struck me was how one would definitely need to rent a car to get around Antiparos (even though it’s small – there were few taxis and some random buses). Didn’t see the Rooster though – wish I had.