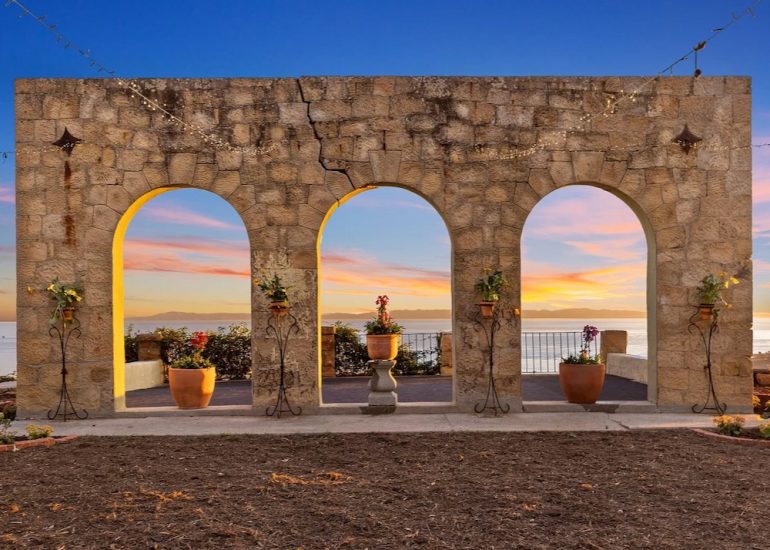 698 E. Mountain Drive ($78 million), a.k.a. Mar y Ciel and, before that, the Montecito Tea Gardens, has come back on the market. (It has been listed various times, often in partial increments, in the past decade.) From the new listing: “Eighteen legal parcels on over 331 acres make this an unprecedented offering in one of the most sought-after estate locations in Montecito [….] This is a rare opportunity for a buyer wanting either an exclusive family compound, a community of private world-class estates, or a variation of both. All eighteen parcels have certificates of compliance, many of which have lovely building sites and are ready to begin the design and permitting process.” The Wall Street Journal covered some of the property’s history (although nothing about the Tea Fire), including this about the current owners: “The sellers are Keith Schofield, 83, a research chemist and retired professor at the University of California at Santa Barbara, and his wife, Kay Robinson Schofield, 74. The couple bought the property for $14 million in 2000 with the intent of building a family compound.”

One of the state’s few regenerative farms, 350 Greenwell Avenue ($10.5 million) is a sweet two-bedroom house on 11.75 acres in Summerland. The farm, with “coffee, avocados, agave, and many other sustainable crops,” is managed by the White Buffalo Land Trust.

I could do without the carpet and the bathrooms go rather hard on the white, but otherwise there’s a lot to like about 4345 Via Glorieta ($8.39 million) in Hope Ranch. Besides the four-bedroom main house (all with en suite baths), the property has a two-bedroom guest house.

The exterior of the 1973 house at 1141 Glenview Road ($6.25 million) on Pepper Hill has a low-key charm, the better to contrast with the dazzling views from inside. The four-bedroom, two-and-a-half-bathroom ratio isn’t great for a $6 million house, however, and some of the interiors feel like they belong elsewhere. I’d like to see this one when it gets redone.

The floor plan of 1839 E. Mountain Drive ($5.5 million), in a prime Montecito location—with a trailhead across the street—looks like it might be a little wonky, but there are attractive moments throughout. If the “storybook” facade gives you pause, go over to San Ysidro Lane to see a similar French-inspired house in the middle of an impressive makeover. N.B. According to an email the listing agents sent out, offers were reviewed yesterday.

1075 Toro Canyon Road ($3.995 million) looms over west Montecito, but up close, it’s not especially grand. To wit, the “comfortable casual cowboy vibes” include a dirt driveway.

No surprise that 1409 La Cima Road ($2.895 million) has already gone into escrow: look at those wraparound views. It just wants a bunch of new surfaces.

The Riviera’s 1417 Hillcrest Road ($2.495 million) needs a thorough redo, but the primo views might be worth the effort. Love how you can see all the way through the house.

2332 Las Canoas Road ($1.835 million) is a three-bedroom, one-and-a-half-bathroom house with all kinds of funk. Two of these photos are of “hillside and in-ground storage safety vaults.”

I was seventeen the first time I went up to the Tea Gardens, that was in 1977. It was magical, overgrown like something out of “The Lord of the Rings.” Over the decades we went up many times for full moon risings, I even took my parents up. But then these people bought and cleared out most of the cool trees and shrubs, followed by the knuckleheads that had a fire, and we know how that turned out. If the property was buildable it would have happened in the last twenty years. $78 million? More like 7 or 8 million.

And then of us think it is priceless, I wish I had 78 million…. So I could build nothing on the property my grandfather tended to and managed…

What a bizarre and mean spirited way to refer to a wonderful local couple who run two great shops, know all their customers by name,… — BW