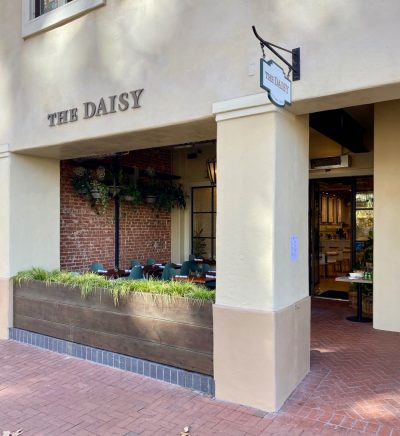 With one or two exceptions, the excitement in Santa Barbara’s dining scene is at the fast-casual level—restaurants where you order at a counter. To wit: Café Ana, Tyger Tyger, Bossie’s Kitchen, Merci Montecito, Field + Fort, and now The Daisy, on State Street between Victoria and Anapamu.

The proprietors are Dominic Shiach and Carmen Deforest, the couple who previously ran the Book Ends café atop the Antioch University Building (subsequently the Honey B Kitchen). The Daisy is far more ambitious: the menu expands beyond sandwiches and salads to include snacks, toasts, soup, “all-day plates,” and dinner entrées.

The restaurant functions like Café Ana: After ordering, you’re given a number to take to your table, of which there are many, indoors and out on the covered sidewalk patio. A server then brings a carafe of water and, when it’s ready, your food. And the food, while more comforting than inventive, is very good: on my two visits, the standouts included the house fish plate, the French fries, and the potato-and-arugula soup. If the brisket banh mi and cheddar-tomato sandwich weren’t at the same level, they were far from disappointing. All in all, The Daisy comes off as the best thing to happen to State Street in recent memory.