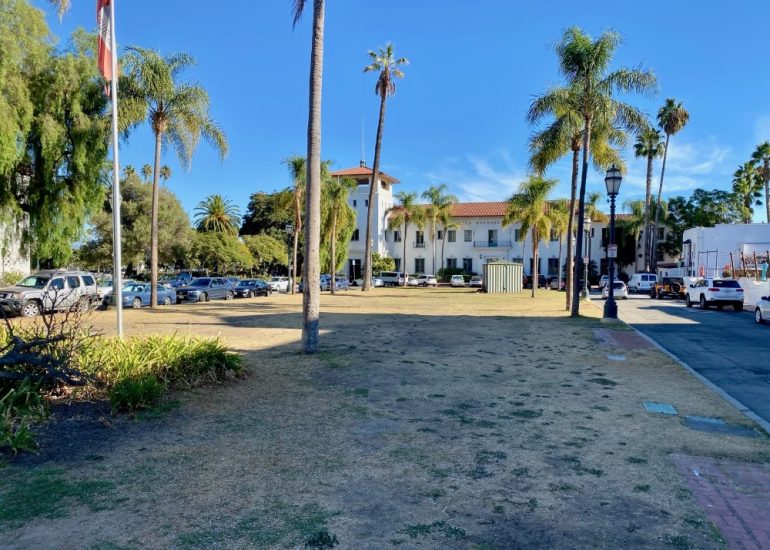 ••• The KEYT interview with Santa Barbara Public Works director Rebecca Bjork that mentioned the likely new location for the Saturday farmers’ market had other updates of note. On the new police station at the Cota Street commuter lot: “We’re in design and that’s continuing. We will not be adding additional funding to it but we have enough money to keep that project very, very active right now, so it won’t slow down.” On a revamp of De la Guerra Plaza (above): “We had a really good meeting with our task force last Friday. They came up with a vision statement for how the plaza should be designed.”

••• Newsmakers talks with county supervisor Gregg Hart about “the county’s just-released, 80-page strategic plan for re-opening from the pandemic shutdown [that] touches on virtually every aspect of community life—from funerals, restaurant seating, and pickle ball courts to Zumba classes, nose piercings and Holy Communion.” But: “It is unclear precisely what function [the plan] will serve, Hart said. Several weeks ago, when Newsom said he would put authority for reopening in the hands of county officials, it was envisioned as an early action document; now the governor has changed his stance, reserving the power to make county-by-county re-opening decisions from Sacramento.”

••• A mountain lion was spotted two days in a row at the El Escorial condo complex near East Beach. —Noozhawk

••• “Carpinteria to Keep Pandemic-Related Parking Restrictions in Place to Help Mitigate Crowds […] Santa Barbara County is also planning to use temporary parking restrictions to deal with crowded trailhead areas and beaches.” I believe it’s fundamentally wrong to restrict beach or trailhead access to people who have the luxury of living within walking distance. And I wonder whether it really helps, when you can just park farther away and walk.  —Noozhawk

••• “The summertime Concerts in the Park series [at Chase Palm Park] is cancelled for 2020 in Santa Barbara due to crowd gathering issues.” —KEYT

••• Edhat‘s tree of the month is the southern live oak, “a medium to large, long-lived (over 400 years!), broadleaf evergreen tree that, in our area, rises to 30 to 40 feet with a spread of 40 to 60 feet—considerably smaller than the massive trees seen in the southeastern U.S. Time will tell how large it might grow and how long it will live in our area, since it was only first planted as a street tree in Santa Barbara in the 1940s.”