••• “The city of Santa Barbara has pulled $2 million in funding that it had set aside for building a new police station. Officials dropped the expenditure that was originally proposed as part the 2021 budget in response to calls from the public to dramatically overhaul its budget. […] The city did not formally approve its budget, but the City Council gave direction to city staff before next week’s budget vote. The council wants to fund an outside review of the police department, find money to build or partner with the community on a black community center, shift parking enforcement from the police department to public works, and fund four positions to focus on mental health and code enforcement. In addition, the council agreed to take $1.115 million from pavement funding to pay for the Library Plaza, which had previously been removed from the budget.” —Noozhawk 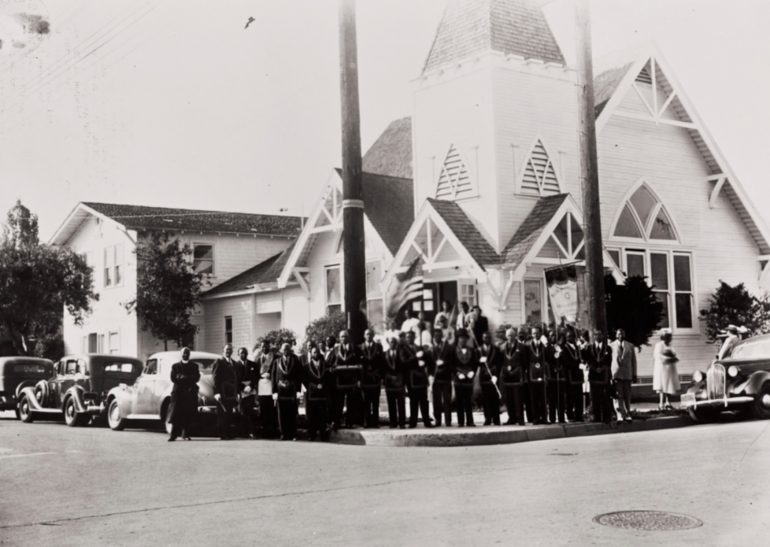 ••• “In response to a list of demands given by the regional chapter Black Lives Matter, specifically that the city protect landmarks of historical significance to the local black community, the Santa Barbara Trust for Historic Preservation is lobbying city authorities to include St. Paul’s AME Church on its official list. ‘There had been an African Methodist Episcopal church on the site of 502 Olive Street [at Haley] since 1906, when it was the only structure on the entire block, and Olive Street was known as Canal Street,’ the Trust wrote in a prepared statement. ‘It was built by the local African American congregation to serve as a house of worship for its members.'” —Independent (photo courtesy Santa Barbara Trust for Historic Preservation)

••• Edhat‘s tree of the month is the snowy fleece: “In late April through June, tiny flowers appear on cylindrical bottlebrush-shaped flower spikes (up to 2 inches long and 1 inch in diameter), which form along the stem of nearly every twig. Each spike holds up to 30 flowers. The tremendous number of flower spikes can literally cover the tree and obscure the foliage! […] Mature Snowy Fleece Trees can be seen as street trees in several places about town: on the first block of E. Junipero Street through the 200 block of W. Junipero Street; and, intermixed with ‘Prickly Paperbark,’ on the 200 to 500 blocks of E. Canon Perdido Street. There are single specimens in East Alameda Park (at the corner of Santa Barbara and Sola Streets), in Lower Orpet Park, and in Franceschi Park.”

••• You know that conjoined-barn house in Montecito’s Hedgerow that Ellen Degeneres and Portia de Rossi flipped for a tidy profit? The buyer was pop star Ariana Grande. —Dirt