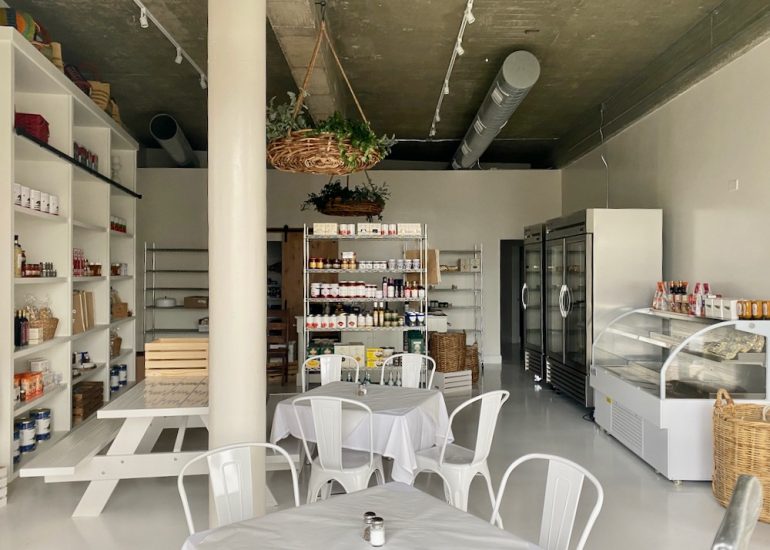 ••• The market side of Montesano Deli & Market* on Coast Village Road has had a sign up for a while now saying that it’ll open soon, and it has applied for a beer-and-wine license. Meanwhile, the windows are unpapered, so you can get a decent look inside. (*Or maybe Market & Deli? The signage is having it both ways.)

••• “The ongoing quest to bring a restaurant back to Goleta Beach is now the subject of a lawsuit that claims the current developers broke their contract with a former partner, stole her ideas, and committed fraud along the way,” reports the Independent. “Alicia Whitney, who founded the Sea Legs restaurant group in Huntington Beach, is suing her former, longtime employee Omar Khashen and his business partner Joe Diggs for breaches of contract and fiduciary duty, misappropriation of trade secrets, and fraud. Khashen and Diggs have been remodeling the former Beachside Cafe into a new establishment since winning the bid nearly one year ago.”

••• Palmina Wines is merging with the new Vega Vineyard & Farm “and we look forward to seeing you when the construction is complete [….] Very exciting new venue with a tasting room, farm stand, farm animals, and food menu” (via Edible Santa Barbara). Here’s more about Vega, from a subsequent press release:

Hospitality entrepreneurs Karen and Jimmy Loizides have plans in place for a Wednesday, September 28, opening of the first part in what will be a phased launch [….] The working winery, farm, and event venue, located on historic land most recently home to Mosby Winery & Vineyards, has been renamed “Vega” in honor of the ranch’s initial identity, Rancho La Vega, and its important place in the heart and history of northern Santa Barbara County.

The 212-acre Vega Vineyard and Farm will comprise the previously-Mosby property’s 21 acres of vineyards, currently covered in Italian varietals, as well as the property’s winery and tasting room, both of which have undergone extensive updates and a design overhaul. The tasting room, situated in a barn which was once the land’s circa-1880s carriage house, joins the likes of other historical structures on the ranch including the original adobe home [and an] adobe-style chapel, built in 2014 with pews salvaged from an Ohio church.

Phase one of the property’s new life will entail the reopening of the now-family-friendly winery tasting room for bottle sales and tasting experiences. […] Part [two] of Vega Vineyard and Farm’s initial phase is the opening of a second entrance to the property, leading to a newly-constructed barn and recently-planted organic farm. A newly-erected farm stand will offer produce from Vega Farm as well as other produce and baked goods. The farm’s resident animals include goats, pigs, llamas, chickens, and ducks, available for guests to feed, and all part of the farm’s sustainable system. The Vega Farm portion of the new venture will soon feature hayrides along the trail system which runs through the property.

••• “Do you know what happened to the Nook parklet?” asked R. “Such a shame it’s gone!” I stopped by to ask and the staffer said that the city told the restaurant to take it down. I suspect it had something to do with the parklet blocking one lane of the two-way street.

••• The Black Sheep says that after it closes, it’ll be selling everything (September 7-8).

••• An update from Kin Bakeshop about its Turnpike Center location: “Our city permit finally got approved and we are at last about to start construction. We are looking at a late 2022 soft opening if all things go well.”

••• A sign at Kai Sushi on State Street says the restaurant is “closed due to illness,” so perhaps it’s going to reopen.

••• First look at the dinner and brunch menus for Campo del Sol, the Coast Range–affiliated project opening this Saturday (or at least that’s the current plan) in the former Succulent Café space in Solvang.