On September 3, Santa Barbara’s Planning Commission will discuss—but not issue any rulings on—the proposed conversion of six downtown lots into a single 30,000-square-foot mixed-use development with 36 apartments, one restaurant space, one office space, and 17 covered parking spaces. While it has an appealing solution to the challenge of a mid-block parcel, it also requires the demolition of two buildings. 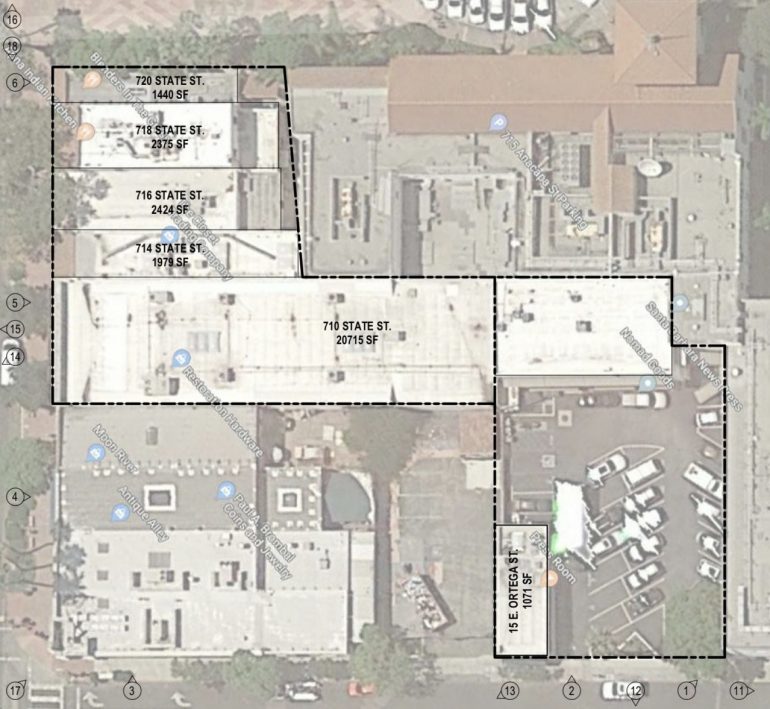 But two buildings will be demolished: 710 State Street, currently home to Restoration Hardware, and 15 E. Ortega, where The Press Room bar is. The latter was built in 1925 as a plumbing store; three weeks ago, the city’s History Landmarks Commission determined that it’s not historically significant.

In their place will be a building—the darker gray below—most of which is four stories, peaking at 48 feet tall. Kevin Moore Architect‘s design includes a paseo running from State Street through to E. Ortega, allowing for much more light for the apartments.

As you can see from the elevations, varied facades give the feel of a village street. The west and south elevations are along the paseo. (Click on any image to see it larger.)

In the floor plan for the ground floor, note the restaurant at State Street—and, unfortunately, the gates on either side of the residences. They’re necessary for security reasons, but I wish it were otherwise: porousness is a big part of what makes downtown unique.

The developer is SIMA., which owns a number of properties downtown, including El Paseo and Victoria Court.