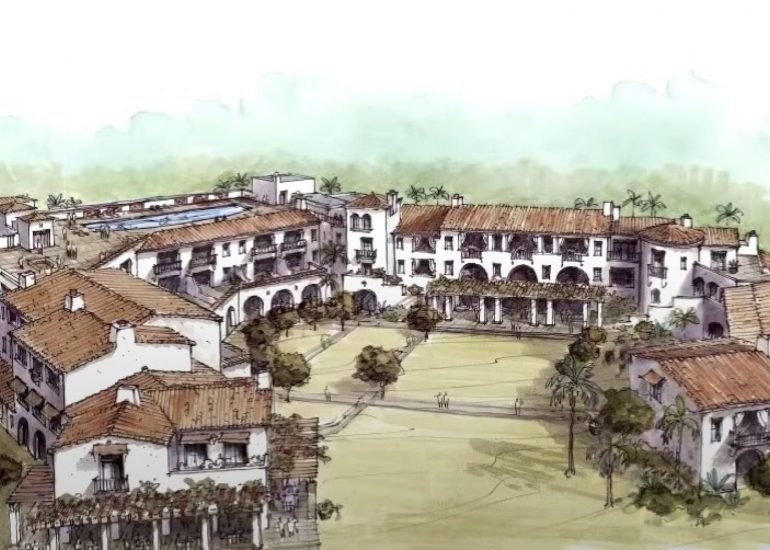 ••• “The Santa Barbara Planning Commission on Thursday gave unanimous support to the latest version of the hotel project on the corner of East Cabrillo Boulevard and South Calle Cesar Chavez. […] A previously approved version of the hotel project called for 150 rooms and 11 parking spaces at the site, officially 433 E. Cabrillo Blvd. and 103 S. Calle Cesar Chavez. In 2019, however, the Parker family partnered with developer Robert Green to change the design of the hotel and reduce the number of rooms to 86. […] The development would include a detached one-story retail building, patios, gardens, a spa and electric vehicle parking spaces. The hotel’s bar would be open to the public.” The developer said the hotel will be nicer than the Hotel Californian but not as nice as the Miramar/Biltmore. —Noozhawk

••• “California is largely closing again amid a spike in coronavirus cases across the state, as Gov. Gavin Newsom announced statewide restrictions Monday to again halt all indoor dining and close bars, family entertainment, zoos and museums. At the same time, most counties […] will be forced to shutter gyms, churches, hair salons, malls and other businesses under the new order, which is effective Monday. […] Counties are placed on a watch list when they experience a rise in hospitalization rates, community transmission or declining hospital capacity, with three consecutive days of troublesome trends requiring the area to add additional restrictions. [….] However, Newsom said counties are likely to come on and off the watchlist, which he said allows the state to operate with a ‘dimmer switch’ to modify restrictions as needed.” —L.A. Times

••• Meanwhile, Santa Barbara County Public Health tweeted that it “is currently reviewing the Governor’s guidance closely and will have further direction for local businesses soon.” But the county will undoubtedly follow the stat’s directions.

••• “Anticipating a possible second peak in Covid cases, Santa Barbara emergency planners are proposing to establish a 200-bed Covid facility at the large, expansive, and vacant site of Sears, located in La Cumbre Mall. County supervisors will vote this Tuesday whether to authorize up to $1.2 million to transform the vacant department store into a regional emergency medical facility and up to $40,000 a month in rent for up to 18 months. County real estate negotiators signed a letter of intent on July 4 with Rippan Property to rent out the 72,000-square-foot property.” —Independent

••• “A 2.8 magnitude earthquake shook the ground in Santa Barbara County near the edge of Carpinteria on Sunday. The small quake struck around 6:18 p.m. and could be felt by residents immediately nearby in Carpinteria.” —KEYT

••• Supervisor Das Williams responded to the damning Grand Jury report about how the cannabis industry managed its own regulation. —Newsmakers

••• “Historic Markers at SB Courthouse Celebrate Colonial Exploits of ‘White Men…White Women, Children.’ […] Objecting to ‘the offensive, racist language’ of the plaques, Board of Supervisors President Gregg Hart told us last night that he intends to see they are ‘removed as soon as possible’ from the Courthouse grounds.” —Newsmakers