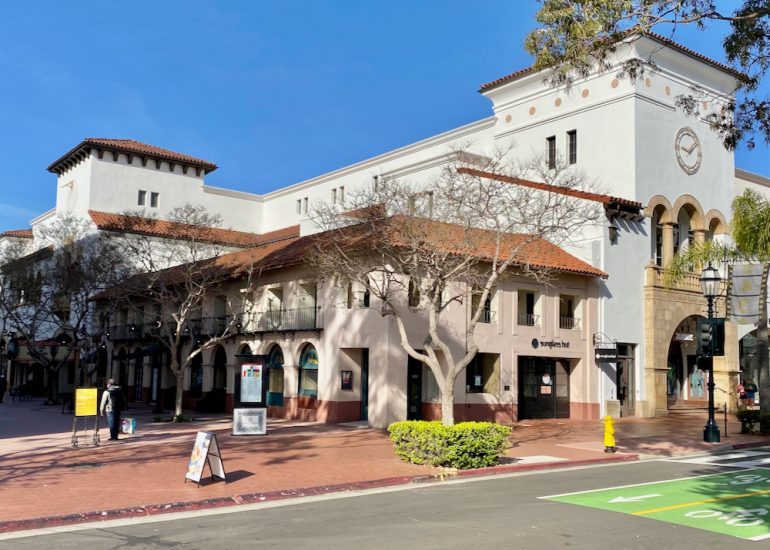 The agenda for the April 14 meeting of the Santa Barbara Historic Landmarks Commission includes an interesting development at Paseo Nuevo: a 14-room hotel at 801 State Street, across from De La Guerra Street and fronting one of the paseos into the mall. Technically, the building is not part of the mall, though; the owner is Hughes Landholding Trust, which is being helped on the project by Miramar Group. (More on the Hughes family can be found in this 2009 Santa Barbara Magazine article.) Previously, the plan had been to convert the building to offices and apartments.

The description from the agenda:

The Las Tiendas Building, constructed in 1925 in the Spanish Colonial Revival style, by A. C. Sanders, is a designated Structure of Merit. Proposal to renovate the existing 7,110 square foot two-story commercial building to a new 14-room hotel with food and beverage service. The project includes a 2,732-square-foot (net) third-story addition with a roof deck and elevator shaft, and an expansion of the existing basement. Development Plan Approval findings are required for the construction of 2,996-square-foot (net) new commercial floor area. In-Progress Review of a trellis at the roof deck, building sections to illustrate parapet heights, and roof, door, window, plaster, and balcony details.

While the plans by Cearnal Collective don’t include any renderings except the sketch above, they do have more information about the project:

The design will include rehabilitation details including: restoring round arches at the corner of the first floor, restoring the original color of the building, removing the modern tile bulkheads on the De La Guerra street elevation, and restoring the window size and wrought-iron balconies along the State Street elevation. The carved roof rafters and stenciled eaves will be reused; if too deteriorated, these elements will be photodocumented and documented with detailed scaled drawings prior to their demolition before being recreated to match existing. As part of the design, a cornice will be added to delineate between the lower two floors and the new third floor, to match the existing column capitals on the De La Guerra Street elevation.

The new hotel rooms will not have kitchens.

Construction is anticipated to last 12 months, and will consist of normal construction activities including subsurface excavation for the basement addition. All excavation will be located within the existing building footprint.

Here are the east and south elevations. Note the rooftop trellis. 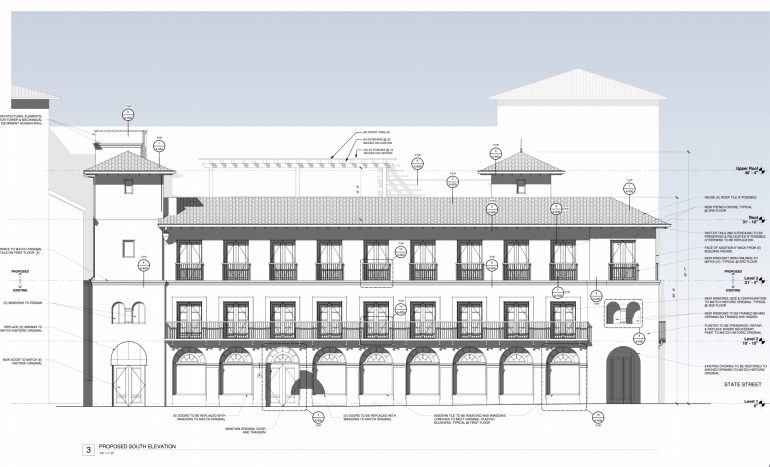 The floor plan for the basement shows a substantial lounge,

The ground floor, meanwhile, has another lounge in the northwest corner, a restaurant along the southern side, and the lobby entrance further down the paseo.

There would be seven hotel rooms on second and new third floor. Initially, I thought the property might be going for the high-end—why else bother with just 14 rooms?—but there are no suites and none of the rooms have separate tubs. We’ll have to wait to see who the operator ends up being.

As for the roof deck, given the trellis and restroom, and the lack of a permanent bar, it would seem to be for events or other gatherings.

This makes the second hotel in the works for lower State Street, the first being the Jaeger Partners conversion/expansion at 524 State Street (Cota/Haley).

Weird idea. 2 lounges and only 14 rooms? Let’s see if it goes though review.