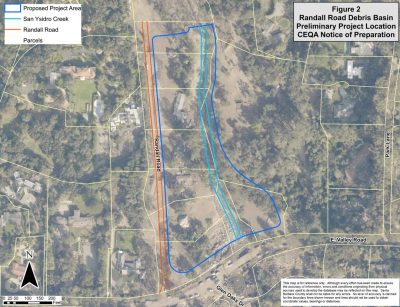 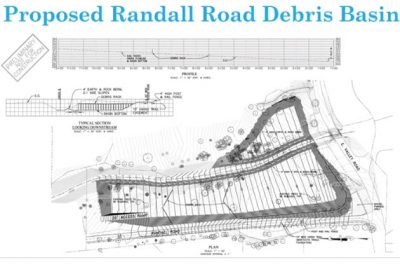 ••• “Environmental review for a new Montecito debris basin will be finished next year, according to Santa Barbara County Flood Control [….] The county does not have all the funding necessary for the proposed debris basin on Randall Road and Highway 192, at San Ysidro Creek, but has hired project design and environmental review process consultants. […] The Randall Road debris basin would be built on more than 8 acres of property along San Ysidro Creek.” —Noozhawk

••• “The Trump administration confirmed it would open another million acres of public land for oil and gas leases—122,000 acres of them in Santa Barbara County—including Bureau of Land Management properties near Jalama Beach, Lake Cachuma, and Cate School. […] Some of the leases would go for as little as $2 an acre, said [Los Padres] ForestWatch’s Rebecca August.” —Independent

••• “Unpermitted work has halted construction on the Bristol Farms store at La Cumbre Plaza in Santa Barbara. City officials say it’s unclear when the project will be back on track.” Last month, a rep said the store was expected to open “in early 2020, barring any further building restoration issues.” —Noozhawk

••• “Thirty-three units of housing for homeless individuals just entered a rather long project pipeline when the Board of Supervisors agreed, in theory, to sell a parcel on the 4500 block of Hollister Avenue to the County Housing Authority. […] About half the housing is intended for homeless persons with serious mental illness, or those at risk of homelessness. The other half are for homeless individuals with incomes of 60 percent or less of the area median income.” —Independent