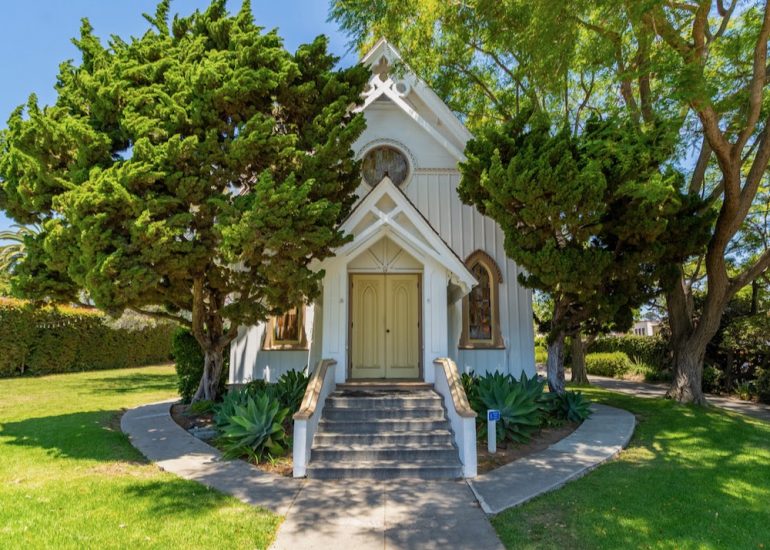 ••• Here’s a commercial real estate listing you don’t see every day: “2020 Chapala is a commercially zoned half-acre site with two commercial buildings totaling approximately 4,068 square feet: There is a 2,803-square-foot chapel and a 1,265-square-foot office building. The front building is a former church and historic landmark. This redwood chapel has a seating area for approximately 175 people, three offices, a waiting room, two restrooms, kitchenette, and storage. The rear building has three offices and a restroom. There are 17 parking spaces and a large yard area. […] The chapel dates to 1875 and was moved to the current site. It was later converted to the offices of California Time Sharing (a computer business serving many Santa Barbara companies) and is now leased.The tenant is a mortuary using it for offices and funeral services.” The price is $2.695 million. Maybe the Church of Skatan can be revived.

••• Architect Robin Donaldson has been posting many new exterior photos of the Pepper Hill house he designed with/for Bruce Heaven and Lynda Weinman. But it was this bathroom that really caught my attention. (And I threw in a doorway shot, just because.) I can’t wait for the full look at this place! All of the photos below are by Joe Fletcher.

••• While we’re on the subject of local architects sharing photos of cool buildings, here are two terrific ones by Jason Rick of Jeff Shelton’s Stone Tower house in Montecito.

••• The reopening of the Butterfly Lane pedestrian undercrossing has been pushed back to mid-September, says Caltrans.

••• Santa Barbara Airport announced that “incoming passengers will soon be greeted by a baggage claim audio recording of Santa Barbara local Kevin Costner,” but it’s also an ad for some app of his (that will apparently show up in the departures area, too, judging from the photo).

••• The Pad says it’s not opening a climbing gym at 410 State Street after all, but it’s working on a location elsewhere in the area: “We’ve been busy with a lot of paperwork! Currently, we have planned 15,000 square feet of space with 13,000 square feet of climbing. Lead, TR bouldering, a dedicated kids area, weights and training walls, showers, tons of parking and easy access to both Goleta and Santa Barbara.”

••• I stopped by the new Sunkissed Pantry shop the other day, partly because I was curious and partly because I wanted to make up for misidentifying its location when I first mentioned it. (The shop is in a neat spot, on the paseo to the left of the Lobero Theater.) The idea is that you refill containers with cleaning products, bath/body stuff, and so on. While I’m not sold on reusable toilet paper, the rest seems like its time has definitely come.

The Santa Barbara Garden Club is seeking donations to fund the development of the triangular park at Hot Springs and Olive Mill Roads. The county is not contributing.

The food and prices belie the beautiful setting. The cioppino was the most mediocre and expensive example of the dish I’ve ever had. Lukewarm too.… — Jeff

SBNP has been demolished, for years — christine!

Closing State Street to automobiles is a good start but I want to feel safe when walking, dinning or shopping on State Street - it’s… — Bruce

Is there any way we can find out where this sign is and if it's going back up? This sign is a gem and should… — Liz

I've got an even better solution. Buy the SB News Press building and turn THAT into a hotel. I hope the Press Room can be… — Liz

I’m writing this as I don’t even understand the other reviews on SYR. Our San Ysidro Ranch Thanksgiving dining experience was perfection. I ordered vegetarian… — Bruce

Mācher in Goleta, on Calle Real between Fairview and Patterson, is super cute. Easy and free parking, lunch at Nikka Ramen, groceries at TJs... even… — Christine_Z28