••• Have you seen the “El Prado” sign on the Arrellaga side of the Courtyard by Marriott hotel under renovation/construction and due to open in November? (The property was the El Prado Motor Inn, then a La Quinta Inn, and now it’s being turned into a Courtyard.) My husband thinks the sign is great, and better than a soulless Courtyard by Marriott one (as on the State Street side), but it seems a little Outer Las Vegas to me, a prime example of leaning too heavily on the kitsch aspect of midcentury design. Because the property used to have a sign like that, I guess the new incarnation of the hotel has to have one, too (even though the Marriott website doesn’t mention El Prado at all, which sure seems like it could lead to confusion upon arrival). I wonder how it got the name: there isn’t much to evoke the museum in Madrid or a meadow, which is what the word means in Spanish. P.S. Love how my phone corrects Prado to Prada, as if I couldn’t possibly mean one of the world’s foremost cultural sites.

••• Opera Santa Barbara kicks off its new season this Saturday, October 1, with a performance of Puccini’s Tosca at the Granada Theatre. To follow: La Scala di Seta (Rossini), An American Dream (Perla), and Die Walküre (Wagner).

••• The Jake & Jones menswear shop has soft-opened in the old Make Smith space on De La Guerra. It’ll be interesting to see what this fleece-and-flip-flops town thinks of brands such as Alex Mill, Marni, Amomento, and Maison Margiela. The shop is currently open 10 a.m. to 5 p.m., Wednesday through Sunday, with a grand opening slated for mid-October.

••• This Saturday, October 1, “Santa Barbara County Search & Rescue is hosting a Public Open House and also celebrating 60 years of providing our free rescue services. […] There will be vehicles and equipment on display, rope rescue demonstrations, K9’s and their handlers, and team members available to answer questions and provide tours. SBCSAR will also have a BBQ and a raffle and/or silent auction with some great items. All the proceeds will go towards supporting our team and ongoing operations. Throughout the year, SBCSAR is supported by generous community giving and grants.” It’s noon to 3 p.m. at 66 S. San Antonio Road.

••• Someone tell that guy who hangs out on Upper State Street: on October 6, from 5:30 to 7:30 p.m., UCSB Arts & Lectures is throwing UkraineFest, “a free cultural celebration featuring craft displays, short music and dance performances, a custom ‘sunflower’ cocktail at The Good Lion and more.” The cocktail is presumably not free. The whole thing is a prelude to that night’s performance of Ukrainian folk band DakhaBrakha at the Granada.

••• A while back, a reader asked what was going in next to Studio X Sculpt Pilates on De La Vina, just above Mission, and I wasn’t able to find out. Seeing draperies in the window recently, I tried again. First, I learned that Studio X moved to La Cumbre Plaza (and shifted from mat Pilates to Reformer machines). Second, the storefront to the south will be a salon with Santa Barbara Beauty Bar, which does an eyelash extensions, as a component.

This residential enclave of free spirits, located in the hills above Montecito in an area bounded by Gibraltar Road on the north and Coyote Road to the south, with Mountain Drive forming the spine, began to coalesce in the years following World War II. The driving force behind its formation was Robert McKee Hyde, known to all as Bobby.

Hyde was the son of Robert Wilson Hyde, who was a major figure in the West Coast arts and crafts movement shortly after the turn of the 20th century. Bobby Hyde was born in Chicago in 1900 and, upon the family’s move west two years later, spent part of his childhood in Santa Barbara. After traveling in Europe, Hyde settled in New York state and into a career as a writer. In 1932 he returned to Santa Barbara to reunite with and marry Florence Tuckerman, with whom he had fallen in love when he was 21.

In 1940, Hyde began buying property in the Mountain Drive area but did not start to build until after the end of World War II. In the late 1940s, Hyde began selling one-acre parcels to folks he felt would be compatible neighbors. In these days before uniform building codes, residents were free to build as the spirit moved them, using whatever was at hand for construction material. By the mid-1950s some 20 families had joined the Hydes, increasing to around 40 families by the early 1960s.

The spirit of the community was bohemian, a “live-and-let-live” feel that fostered a close-knit camaraderie. Community interaction often centered on a growing number of celebrations and festivals. Probably the best-known was the Wine Stomp, begun in 1952, in which the Wine Queen selected that year was joined in the large wine vat by neighbors to crush that season’s harvest. Other celebrations included Twelfth Night in December, Halloween, the 4th of July picnic, Bastille Day, and Robert Burns’s birthday. The crafts festival, Pot Wars, begun in 1962, attracted so many people to enjoy the homemade wares, music, and food, the county shut it down in 1967 due to traffic concerns.

Fourteen houses were destroyed in the 1964 Coyote Fire, including the Hyde home. The Hydes moved back into town, and Bobby concentrated his energies on his property in the Painted Cave area, where, to get around building codes, he constructed a lake and floated upon it a houseboat, a structure that did not come under county regulations. 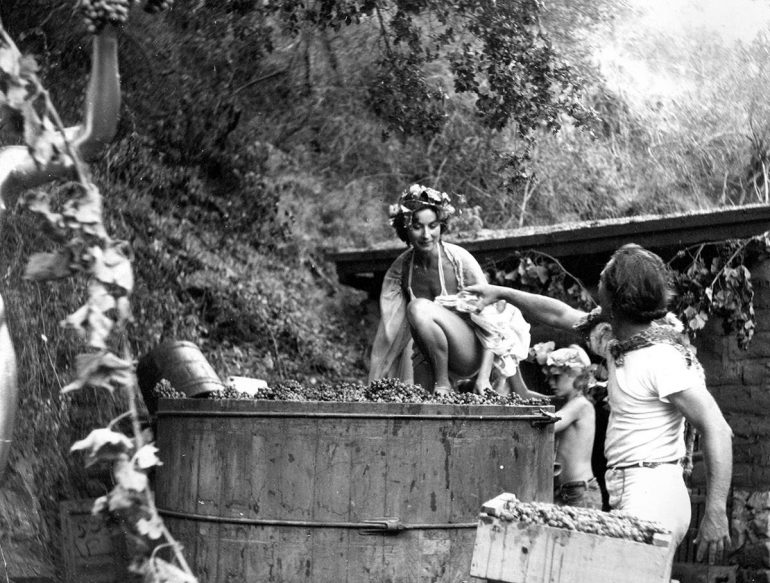 that El Prado sign is the original one that hung for many years until they pulled it down to recondition it for this remodel. the EP motel was famous in its cheaper days as a crash pad for bands that came to town to play. plus, Cantwell’s used to be a dance club and bar back in the 70’s.

I agree with your husband. The sign looks great! Love the colors, too. It’s nice to see things of numerous eras preserved.

I like stories about the old days, does anyone know what happened to the green neon sign that was in front of El Encanto hotel?

I’ve wondered, too. I miss it every day.

Are all the dishes on the left side of the first page of the menu pictured tacos? Sounds really delicious. — Christine_Z28

My family went a few days ago and loved it. Delicious. — Adam

San Ysidro Ranch is one of the most beautiful dinning experiences in California. We are locals and dine there often - always perfection. — Bruce

Thank you so much! Love all these shops so much! — Jen Huang Bogan

Domecil is such an amazing shop: they have high end artisan products which are so beautiful that I hang my blue and white striped basket… — Meridith Moore

Shopping online is boring! Shopping in person is fun! Go find great things for the people you care about at our many terrific independent stores, including Field Trip and Mācher. Shop Local Gift Guide, part 3: SitelineSB.com ...