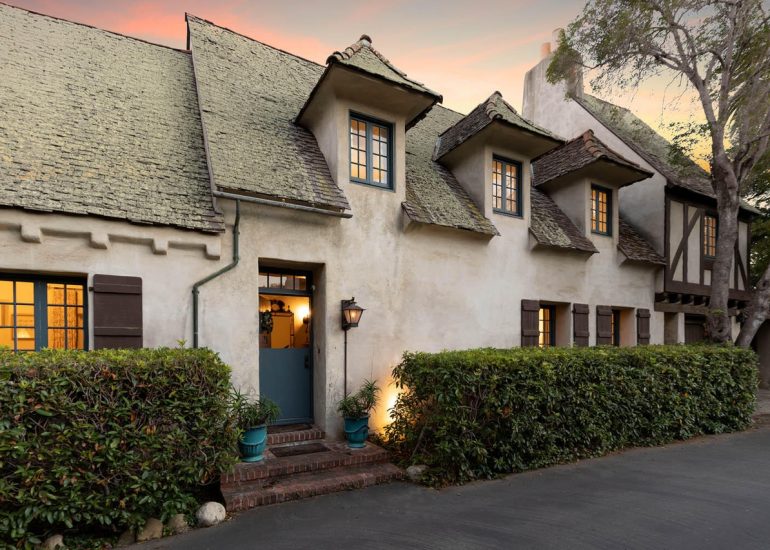 One of my very favorite Hedgerow houses, the 1929 George Washington Smith at 175 Miramar Avenue ($5.85 million), is on the market for the first time since 2014. The interiors are as charming as the exterior, which is saying something (although I might be tempted to lighten the decor a bit). You feel like you’ve teleported to Europe.

Turnkey is rare in the Riviera these days, so I wouldn’t be surprised if 1131 Las Alturas Road ($6.95 million) gets its asking price. The house is built in 2014, and while some of the finishes could stand updating, they don’t need it immediately. The views are impeccable; the pool is nicely shielded from the neighbors; and the roof deck is ready to party.

Much of the five-bedroom house at 403 Woodley Road ($8.495 million) looks move-in ready, but the price is a jaw-dropper for that part of Pepper Hill—i.e., facing the mountains rather than the ocean. It’ll be fascinating to see if it can get it.

Big, brawny 1780 Glen Oaks Drive ($6.295 million) looks like it belongs in the Rockies, and while the kitchen overdoes the country schtick, the rest feels very livable. One possible concern for buyers could be all the construction in the area—especially if someone else picks up the 1.15-acre vacant lot next door.

Someone at the brokers’ open for 491 Pimiento Lane ($5.295 million) said that he knew the guy who built the house back in the 1970s (or at least that’s when it was finished), and that the project was a personal obsession. You can see it in the world-class motor court, with its mosaic of embedded river stones, and you can see it in the quirky choices upstairs, including an awkwardly narrow staircase, low-and-tight doorways, and a closet with a pinched corner. Of note: the seller bought it last week for $4.5 million and immediately put it on the market.

The shape of the 1947 ranch house at 20 Alston Place ($4.495 million) is intriguing—a floor plan like this tends to make for more character than in something boxier. And I like that the lot fronts the ravine, meaning you have one fewer neighbor to worry about.

180 Hermosillo Road ($2.895 million) is too close to Hot Springs Road for my taste, but I’m confident it could be made very cool.

A lot of 1040 Ladera Lane ($3.85 million) wants updating, but it’s on five acres with an ocean view. The fire risk in that neck of the woods is real, of course.