The market certainly seems to be loosening up, because a ton of intriguing new inventory has come online in the past seven days. Could sellers be optimistic the vaccines will allow them to move somewhere else? And/or are they afraid the boom is ending soon?

Built in 2015 but coming off as timeless, 830 Romero Canyon Road ($7.995 million) has all the right moves—wall-to-wall carpeting aside—to achieve a price that, a year ago, would’ve been laughable.

There’s some midcentury zest at 777 Lilac Drive ($5 million), where if you invested in larger rugs and popped a few of the flat ceilings, you could end up with something special. P.S. Brokerbabble award of the week: “A Setting so Extra-Ordinary you pause to wonder how beautiful life could be.”

Once in a blue moon, Birnam Wood surprises with a truly interesting house, such as the 1969 Cliff May–designed 2069 China Flat Road ($7.895 million), where softer, warmer interiors would go a long way. Even at that ambitious price, the property has already gone into escrow.

Turnkey Hope Ranch, if you can abide the countertops: 4660 Via Roblada ($4.695 million) would seem poised to go fast.

Midway between Parma Park and Skofield Park, 2118 Mount Calvary Road ($4.295 million) is a three-bedroom house with a one-bedroom guest house, panoramic views, and one heck of a gym.

How’s this for a flip attempt? Someone paid $2.7 million for 1708 Paterna Road ($4.75 million) in November, “artistically reinvigorated” it—which must mean painting and staging, because how much can you do in two months when every service provider is booked for weeks out?—and floated it back on the market for $2 million more. Come on, that kitchen is decades old. P.S. I preferred the exterior when it was peach.

Speaking of flips: The 1925 house at 1430 N. Jameson Lane ($4.25 million), which has all sorts of period charm, was bought in August for $3.15 million, and the listing says it has been “recently updated,” although that may have happened on the previous owner’s watch. And there’s still nothing between it and the freeway.

There are some very attractive moments at 1383 Santa Clara Way ($2.395 million), which will probably sell fast despite the questionable flooring choices and freeway-adjacent location, simply because there’s so little at this price point in Montecito.

The 1928 house at 1568 Ramona Lane ($3.35 million) in the Hedgerow is as cute as a button; rooms are small but nicely formed. It needs new carpeting (or better yet, wood floors) upstairs. 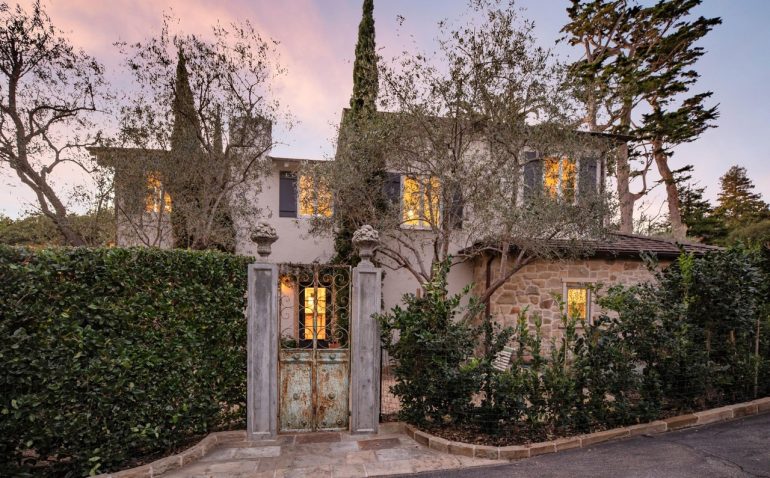 2315 Edgewater Way ($4.295 million) looks like a serious fixer-upper or maybe even a teardown, if you’re prepared to deal with the red tape of building on oceanfront bluff. I dare someone to peek under the three throws being used to hide that sofa thing.

The 1951 house at 2333 Las Canoas Road ($2.2 million)—on 6.57 acres in Mission Canyon—has a freewheeling, let-it-all-hang-out vibe you don’t see much further down the hill. Plus: “At the lower level of the parcel a bridge crosses the creek and leads to a vintage barn.”

Besides the obvious datedness, 1055 Roble Lane ($1.95 million) suffers from a floor plan that has the two guest rooms sharing a bath in the hall. Still, it’s on a single level in the Riviera, with the views you’d expect.