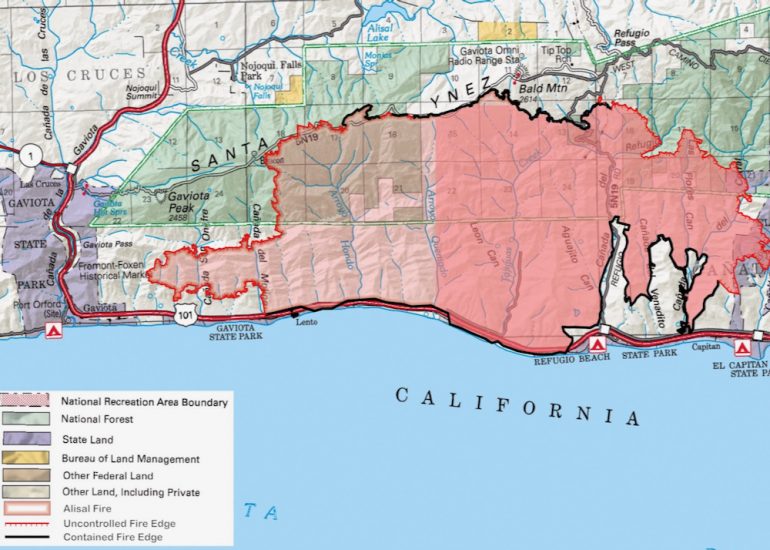 ••• “An evacuation warning that included Gaviota State Park and Hollister Ranch properties has been canceled as the Alisal Fire containment increased slightly Saturday and some personnel were released. […] As of Saturday evening, the Alisal Fire, which sparked Monday afternoon in the Santa Ynez Mountains, had blackened 17,253 acres, but crews had surrounded 53% of the blaze.” —Noozhawk

••• “According to Scott McGolpin, the county’s Public Works czar, damage sustained by the [Tajiguas Canyon] landfill’s new high-tech $150 million recycling operations—only just installed and not yet fully operational—will effectively shut down the dump probably for months [….] Santa Barbara’s trash will need to be hauled to the Toland landfill in Ventura County now at a cost of $500,000 a month. Making matters worse, the county will lose $2 million a month in tipping fee revenues it now gets from garbage deposited in the Tajiguas landfill. […] The county will have to spend at least $10 million replacing the biofilter for the county’s new Materials Recovery facility, at which our trash is placed on conveyor belts and the recyclable materials plucked off and sent—and sold—elsewhere.” —Independent

••• “The fire burned through the hills and canyon of the Arroyo Hondo Preserve, but the historic adobe, discovery barn, family picnic area, and other historic structures and interpretive signs remained intact as of Wednesday, according to the Land Trust for Santa Barbara County.” —Noozhawk

••• “Two childhood friends have turned a dream into a reality. Jorge Rico and Erik Lule-Lopez opened De La Vina Barbers on Tuesday and have been busy clipping, shaving and buzzing.” It’s across the parking lot from Grocery Outlet. —Noozhawk

••• “Santa Barbara City Councilman Oscar Gutierrez is in Mobile, Alabama, this weekend for the christening of the US Navy’s newest ship: the USS Santa Barbara. It is the third ship named in honor of the city of Santa Barbara.” It’ll visit here sometime in 2022. —KEYT

••• The tree of the month: “The Australian Flame Tree has one of the most dazzling floral displays. In a dry summer and early fall, it is a spectacular sight when its branches are completely bare of leaves but are completely covered by brilliantly red flowers. […] With our erratic local weather patterns, this tree often gets quite ‘confused,’ resulting in its usual growth pattern (leaf dormancy combined with flower bearing) becoming confused as well. It can be entirely in leaf and entirely in flower at the same time. Alternatively, it can lose leaves on a just portion of the branches but produce flowers sporadically around the crown. In any pattern, it is beautiful.” —Edhat

••• “Cottage Urgent Care will be moving into 1298 Coast Village Road, with opening expected near the end of 2022.” The Montecito Journal item says the facility will be 2,700 square feet; while the storefront at 1298 Coast Village Road, currently home to Heather James Fine Art, can’t possibly be that large. Meanwhile, there has long been a “for lease” sign for 1292 Coast Village Road (1,509 square feet), elsewhere in the building. Perhaps the 1298 space wraps around behind Folded Hills, Village Properties, and Jules Coast Caviar? Update: John Palminteri says that Village Properties and Heather James Fine Art are leaving. Kind of a bummer to have an urgent-care facility as the big welcome to Montecito…. 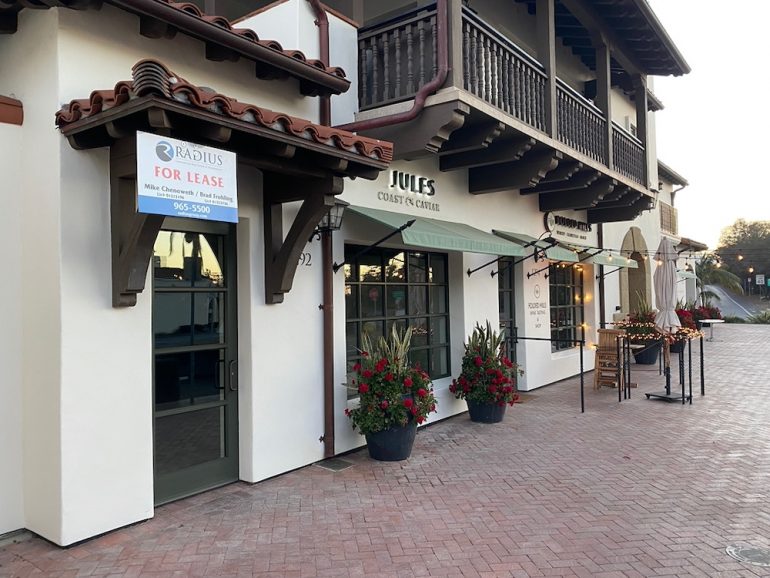