Two weeks after the debut of Bristol Farms, a second supermarket has opened in Santa Barbara: Sprouts, in the former Trader Joe’s space on Milpas just above the 101.

It’s somewhat odd that Sprouts chose a location just three blocks from Trader Joe’s, since they offer a similar shopping experience. They’re of roughly equivalent size, with the same folksy aesthetic—faux barn wood above the dairy section, corrugated metal paneling, groaner puns (“utterly good cheese”), and so on. While Trader Joe’s relies far more on its private label, the merchandise at Sprouts is more akin to that at Lazy Acres—with a lot of outside brands (but not mainstream ones like Best Foods, Kellogg’s, or Coke), and an emphasis on healthfulness.

Nothing of Sprouts is what I’d call gourmet. The baked goods looked mediocre, the deli section was all Boar’s Head, and the wine selection could turn you into a vodka drinker. If I skipped the farmers’ market, I’d go back for the robust fruit section—with its many varieties of grapes and stone fruit—but the vegetables were standard, and often wrapped in plastic, although not as aggressively as at Trader Joe’s. (The sustainability emphasis of the household aisle, heavy on Seventh Generation, doesn’t extend to produce.) One thing I did like was the bulk area, where you can buy pre-bagged staples like flour, sugar, oatmeal, and rice—just hope you don’t get pulled over on the way home—and dose out small portions of spices, which theoretically would be fresher than purchasing your own container and only rarely using it. 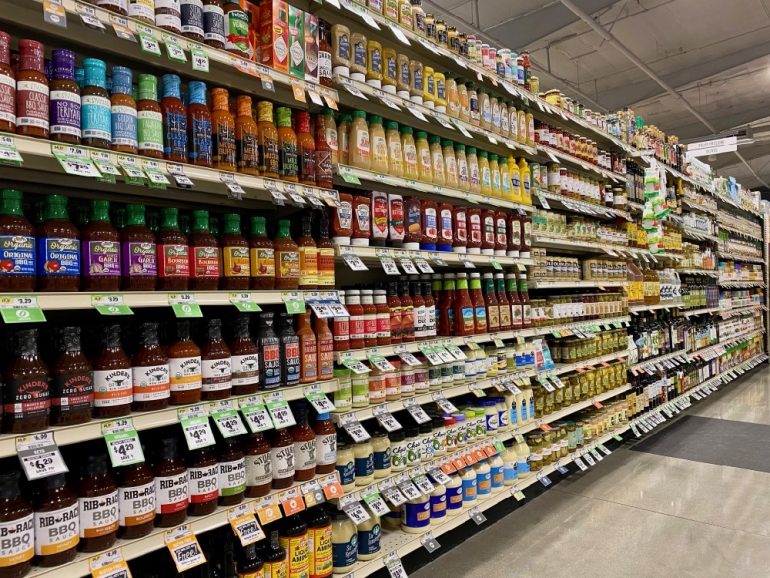 You’re right — I think the comparison of Sprouts between Lazy Acres and Trader Joe’s is a good one. Sprouts still retains its ‘health food store’ vibe — but isn’t. But honestly, the difference is I find Sprouts to be cheaper and sometimes better quality with produce. The fact that its so close to TJ’s isn’t a mistake (its this way in Goleta, and it was that way in Colorado when I lived there!). Fact is, there are some things that Trader Joe’s just doesn’t have, so I guess the thinking is that its easy to pop over to Sprouts and get the rest. Anyway, happy to see it open in this location!