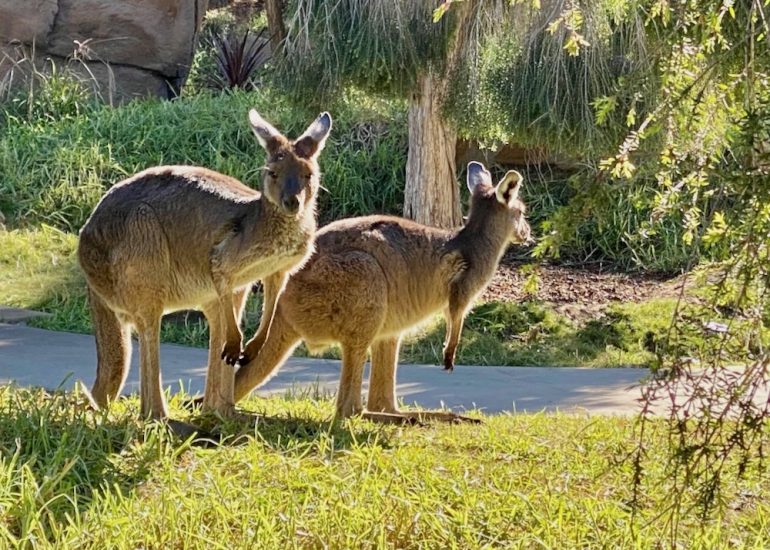 ••• The Santa Barbara Zoo held a media preview of the Australian Walkabout habitat, in advance of the grand opening on Saturday. There are two emus, four Bennet’s wallabies, and three Western grey kangaroos, and the cool thing is that there are no barriers between you and the animals—something the zoo has only previously attempted in an aviary setting. (How the animals feel about it is anyone’s guess.) P.S. The zoo is requiring reservations for all visitors.

••• MarBorg‘s recycling centers in Santa Barbara and Goleta are closed till further notice because of staffing shortages (via Edible Santa Barbara).

••• A luscious new coffee-table book titled Lotusland, with photographs by Lisa Romerein and a foreword by architect Marc Appleton, is being published this spring by Rizzoli. The publisher’s website says it’s coming out March 1, while a press release says the book is due in April; either way, it’ll be a good candidate for Mother’s Day, Father’s Day, birthdays, Christmas….

••• The closure of Bella Vista Drive in Montecito has been extended till June, as construction has to stop during the rainy season for environmental reasons.

••• One of my goals this year is to explore Big Sur, and I’m hoping someone out there might recommend a quality vacation rental. (I tried the Post Ranch Inn once, but the hotel and I were on different aesthetic wavelengths. My other goal this year is to be more tactful….) If you know of one, please email [email protected] or comment below.

••• Billy Strings is playing the Santa Barbara Bowl on April 9 and 10. Tickets go on presale today (with code SBBOWL via AXS.com) and in general on Friday.

I much prefer you continue with your maybe… sometimes….less than tactful reviews and opinions. I find them mostly on point, humorous and truthful……unlike much of what we get from a lot of the press these days. Please don’t change! An avid follower.