The 1956 house at 1777 San Leandro Lane ($4.5 million) in the Hedgerow is a Cinderella’s slipper—glamorous, but not for everyone. The living room is a bit of a cave; the master bedroom, kitchen, and dining room are all pretty narrow; and only one of the guest rooms is en suite. On the other hand, the place photographs great, even if my own preference would be to make the interiors a tad humbler, the better to show off the lovely details. And there are enough amenities for a small inn: “detached office, two-story playhouse, flexible studio, chicken coop, gym, bocce, two fire pits, and an Argentinian BBQ.” Love the tube slide attached to the playhouse. 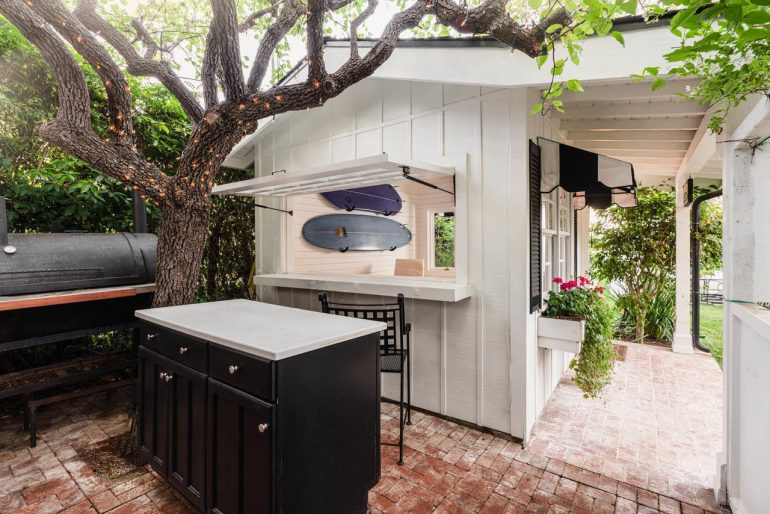 There’s midcentury cool in the architecture of 1101 Alston Road ($5.995 million), although the decor goes in a more traditional direction. The house is right on Alston, and while the lot is an acre, it’s in the shape of a backward J—who knows how much of it is usable—and only one house off Hot Springs Road, which I imagine you can hear from the backyard. Also, for $6 million on Alston, I’d hope for a glimpse of the ocean.

A sucker for a courtyard, I think neat things could be done with 1097 Golf Road ($5 million), which was designed by Frances T. Underhill in 1917 but needs a lot of updating. (That kitchen!) Then again, the property is on the busiest stretch of Hot Springs Road, which might limit one’s appetite for investment.

The listing for 4517 Via Clarice ($2.399 million), abutting San Antonio Canyon Park, calls the house a masterpiece, which is quite the overstatement. There’s potential, for sure, but you’d want to perfect your Hannibal Lecter impersonation.

Great mountain views at 520 La Marina Drive ($2.45 million) on Alta Mesa but the whole house needs updating—new landscaping, too—and an apartment complex parking lot is next door. P.S. Could the fireplace be in a more awkward spot?

Two charming houses on tiny Wellington Avenue downtown have recently sold, and now there’s 2319 Wellington Avenue ($1.5 million), definitely the least appealing of the three. The floor plan is awkward, to say the least. P.S. You could scare the suds right off someone soaking in the master tub.