2511 School Street ($5.8 million), a.k.a. Pepper Hill Farm, is the Ballard home of designer Hélène Aumont. Built in 1980, it’s on five acres, and it’s as dreamy as you’d expect. If only it were being offered furnished…. P.S. “The farm is completed by a charming old world barn with 4 stalls and a tack room, plus the arena where Aumont’s Friesian horses lounge under colorful sycamore trees.”

Built in 1983, 1930 Jelinda Drive ($11.9 million) has seen a few lives over the decades. It started out with a faux-European facade, which at some point got stripped away and replaced with materials—board-and-batten siding, standing-seam metal—more often seen on contemporary ranch houses. I don’t recall whether much has changed inside since the house sold in April 2020 for $6.65 million, but it has been impeccably decorated. The fact that it’s turnkey should make the price palatable, even if some aspects of the floor plan—a basement bedroom, a family room and office that aren’t walled off from the rest of the house—might otherwise be considered demerits.

960 Roble Lane ($2.75 million) is one of 13 houses on the Riviera street to have been designed by local legend Alex D’Alfonso. Coming later in his career, they’re more midcentury modern than the Spanish style for which he’s best known. 960 Roble Lane is not huge, with two bedrooms and two baths on either side of a common area comprising living room, dining room, and kitchen, but it’s totally livable and in excellent shape. (Love the skylight in the shower.) The garage roof is certainly an opportunity; the question is, how to activate it without impacting the view from the dining area?

Down the street, the motley 1978 house at 916 Roble Lane ($2.295 million) is 900 square feet larger, but everything needs to be redone—and judging from the electrical outlet embedded in the shag carpet on a staircase, there may be quirks that need to be ironed out. It has views for days, though, if you can handle all the stairs. 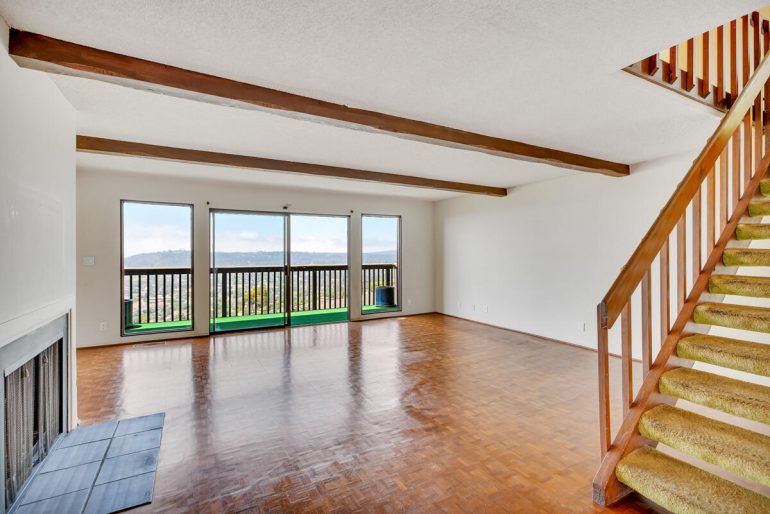 I clearly need to walk the Mesa, because I had no idea that “at the end of this quiet street is a pedestrian walking bridge that offers easy access to La Mesa Park, Lazy Acres, and the Mesa Shopping Center.” But that’s not the best thing about 1919 El Camino De La Luz ($3.695 million): the house is at the edge of the oceanfront bluff. Unfortunately, it isn’t designed or oriented to take maximum advantage of the location. Tearing it down may not be worth the hassle, as the lot isn’t very big and extending beyond the existing footprint will make the Coast Commission tetchy. UPDATE 6/25: After going to check out that bridge, I went to an open house. What I hadn’t realized is that there’s a vacant lot at the end of the shared private lane, and it’s been on the market for a while now for $2.9 million. Combining 1919 and 1921 El Camino De La Luz would seem like the best option; there’s no guarantee, however, that building anything on that bluff will be an easy task.

I don’t get the trim on 3508 Los Pinos Drive ($2.195 million)—the house looks like it has a shiner—and I’ve aged out of finding that kid’s loft appealing. But the street has charm, thanks to the pines, and the garage has been converted into a one-bedroom, one-bath with kitchen. Given how hot San Roque has been, I don’t see this sitting on the market long.

The 1928 house at 1723 Hillside Road ($1.875 million)—”in the highly sought-after Westside neighborhood of Alta Mesa,” if you will—is a peach, with period details throughout. It’s possible that I’ve simply seen too many white bathrooms, but isn’t the green tile in the shower refreshing? P.S. The yard “includes a bocce ball court, a wood-fired pizza oven and an outdoor shower.”