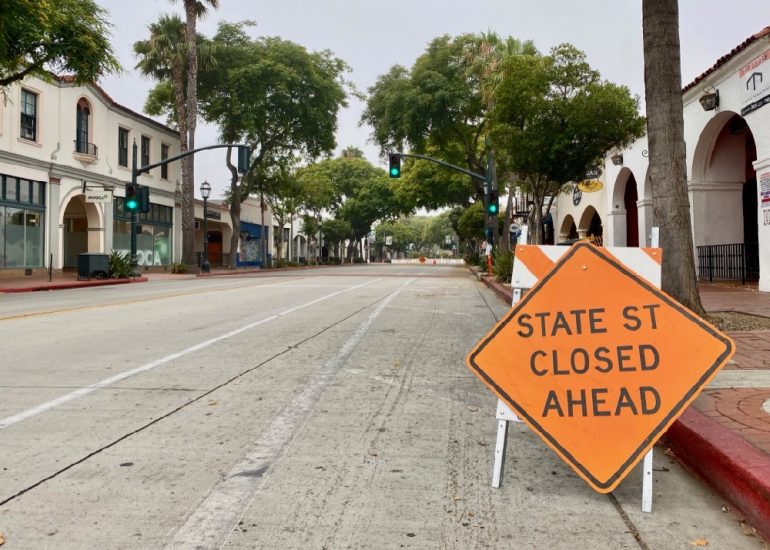 ••• KEYT’s John Palminteri offered some clarity on which part of W. Victoria Street is now closed to cars: it’s the block between State and Chapala. And he says the block of State Street between Haley and Gutierrez is also closed.

••• From Edhat: “A video is going viral of a white woman in the Gelson’s parking lot calling 911 claiming she feels threatened after she damages another person’s vehicle and refuses to provide insurance. The Instagram paged titled Karens Going Wild published the video on Wednesday stating the woman called 911 on a Latin man stating he was ‘threatening her’ after he asked for her insurance information.” I was torn about including this. On one hand, it’s what constitutes news these days. On the other hand, the public-shaming aspect makes me uncomfortable. The woman was hysterical and making bad choices, but we can’t know for certain that her reaction was based on the man’s race. And does she need to be ruined over it? I honestly don’t know. One thing is for sure: the man handled himself with aplomb.

••• From a press release on Noozhawk: “Habitat for Humanity of Southern Santa Barbara County will close its ReStore, the nonprofit’s retail arm.” Consequently, there will be a “clearance sale, 9 a.m.-4 p.m. daily Aug. 6-16 at 6860 Cortona Drive, Ste. A, Goleta.”

••• The Montecito Journal (not online) interviewed Montecito native Max Barbakow, whose film Palm Springs has deservedly won raved reviews. I’m not sure why the paper calls the comedy “heart-wrenching,” though….

A commenter on EdHat says they know the Karen and she’s actually mentally ill. I’m inclined to believe that.