According to a Wall Street Journal article on the property, former HomeAdvisor CEO Chris Terrill and his wife, Katy Powers, bought 4653 Via Roblada ($33.95 million) for $10 million in 2018, with the plan to build a new house on the site—a luscious 13-acre oceanfront parcel on the western side of Hope Ranch. They made it through the permitting process, and work is underway—but the white-hot real estate market has them willing to sell for the right amount. Besides the 7,500-square-foot main house, there will be many outbuildings, including a huge guest house, a 4,000-square-foot garage, a tennis pavilion, and more. The images above and directly below are renderings; the others are photographs.

While some parts of 266 Penny Lane ($5.995 million) could certainly stand updating, much of the 6,700-square-foot house looks like it’s in good shape, and with Ennisbrook one of the hotter spots in the market, it’s priced to move (and, indeed, is already in escrow). I wouldn’t be surprised if it went for closer to $7 million. 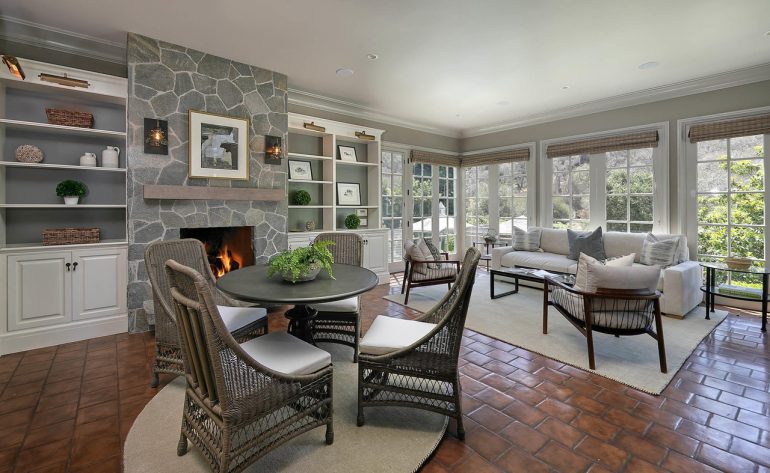 8 Rincon Point Lane ($6.395 million) is a three-bedroom Rincon condo with dated interiors, but it’s right on the beach.

Love the location of 616 Sea Ranch Drive ($4.5 million), on a Campanil flag lot with ocean views. The 1968 house, however, needs a thorough reinvention.

According to the listing, the 1906 house at 2141 Ridge Lane ($1.895 million) is one of the first houses built on the Riviera, and they certainly don’t make floor plans like this anymore. (The living and dining rooms seem to want to be combined, and/or maybe someone can find a way to smooth out some of those awkward angles.) The surfaces are tired but intriguing details abound, and the garage-turned-mancave is pretty sweet.

150 Santa Elena Lane ($3.495 million) in Montecito has curb appeal and a lovely living room, dining room, and kitchen. At this price point, however, the bed-bath situation is disappointing: the master has a small bath, but the bedroom nearby has one in the hall, and the two bedrooms on the other side of the house share a bath on the far side of a common area.

1480 Mission Canyon Road ($3.295 million) is a Barker/Kardashian situation—one style on top of another.

We rented 8 Rincon Point Ln. for a summer in the mid-‘90s. Great location if you love the beach and are a kid, or have them. One memory I can’t shake of living there and also at Padaro was the sensation of constant dampness. Getting into bed at night, sheets were always a little damp. Towels that never quite dry out. Etc. I can’t stand it!

I singlehandedly blame you for ruining Santa Barbara/Montecito. I am so disappointed that you started Siteline.
Your comments about certain properties are mean spirited and our “enclave” is turning into Los Angeles. Thank you.