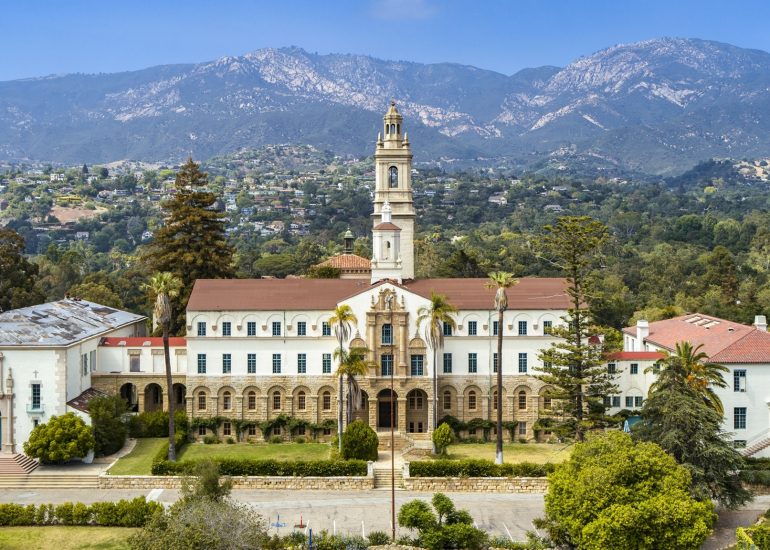 ••• “The former St. Anthony’s Seminary […] is for sale. CBRE and Coldwell Banker Global Luxury announced that it has placed the seminary and its approximately 12-acre site on the market. The property is located behind a wall and gates at 2300 Garden St. The site features six historic buildings that add up to 123,764 square feet. […] The zoning for the site is RE-15, which includes residential single units, luxury senior housing/assisted living, group residential, education, hospitality and more.” The listing does not disclose the price. —Santa Barbara News-Press

••• Dirt revealed that the recent buyers of a contemporary house in Toro Canyon were Young Sohn and Mark Armenante, co-founders of Vlocity. This would be their second property in the area (and who knows, maybe there are more).

••• “Some Santa Barbara County residents caught a rare glimpse of a U-2 spy plane last month. A Dragon Lady conducted low passes over the Santa Barbara and Santa Maria airports on July 27, thrilling and intriguing residents curious about the visits.” —Noozhawk

••• “A last-minute proposal from Gov. Gavin Newsom could keep the Diablo Canyon nuclear plant open through 2035, a decade beyond its current closure date—in part by giving owner Pacific Gas & Electric Co. a $1.4-billion forgivable loan. The proposal is part of draft legislative language distributed to state lawmakers late Thursday night. The bill, which has yet to be introduced in the Legislature, would also exempt the Diablo Canyon extension from the California Environmental Quality Act and several other environmental rules that nuclear opponents might otherwise use to challenge the extension.” —Los Angeles Times

Exciting about the Seminary. It used to be a community asset. Local schools performed concerts in the chapel. Locals could walk their dogs on the property. Etc. It’s been closed off to the world for years and the community has been missing it. It could make an incredible hospitality venture. Fingers crossed something good comes of it and locals are also able to enjoy the grounds and beautiful buildings once again.

Re: The former St Anthony’s property, up for sale. Who currently owns the property? What has it been used for over the last ten years or so? Or has it been vacant except for some concerts in the (former?) chapel?

The Garden Street Academy was there, although I don’t know for how long, and it appears to be the owner (via San Roque School Charitable Trust).

Recently drove over Refugio road- lovely on the SYV side, heavenly on coastal side, exception being the black/crisp canyons remaining from recent fires. I recommend… — Christine!

This hurts, but change is healthy. Surely the sign is salvaged- and will be resurrected at some point. HI! LET’S EAT sign forever associated with… — Christine!

Thank you for taking such a clear photo of the Corazon Comeda menu. It's the only one we could find online to place our take… — michelleroo

What a shame. That was an iconic old school sign and one of the few grandfathered in neon signs. — BW

Love the food at Comedor, my favorite new restaurant! And everyone is so friendly, it’s a very lovely home vibe from the minute you walk… — G

I could help but notice that too!! Horrible for such a high end hotel. — Rachel

I had a good lunch at the Rosewood when Malibu Farms was still there. Since then I’ve only been back for drinks and maybe one… — Anne Call

SY Ranch is still yummy. Worst thing about the place is the terrible fonts and graphic design on the print ads in the local magazines.… — FontSnobSB

Your experience is definitely rare amongst our circle of friends, service is consistently the worst — hands down the biggest waste of money in SB… — Brady