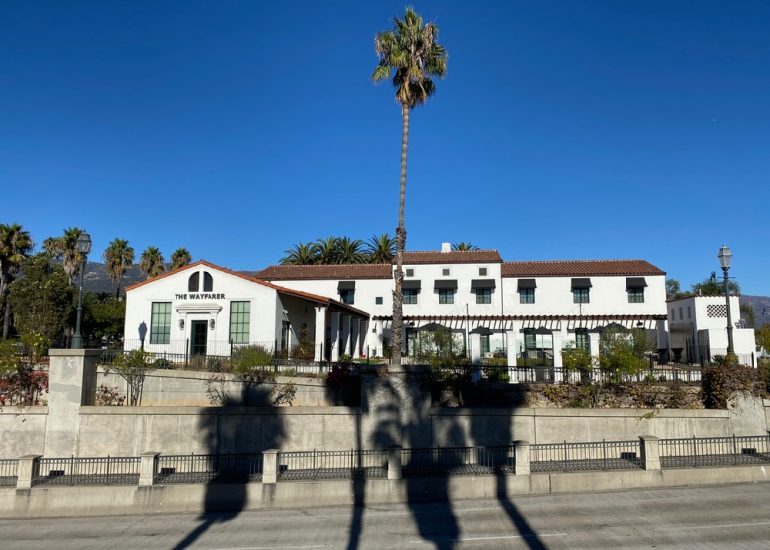 ••• More change is on the way in Santa Barbara’s red-hot hotel market: The 31-room Waterman hotel (above) in the Funk Zone, which you may still remember as the Wayfarer, is on the market. The call for offers is due March 28.

••• Another bit of commercial real estate news, from agent Caitlin Hensel: “A six-building industrial/R&D campus [at 315 Bollay Drive] in Goleta just traded off-market for $50.7 million! Located behind Target, and across the street from Camino Real Marketplace, this sale represents the fourth-highest price on record for a commercial property on the South Coast of SB County (not including hotels). […] The buyer, Majestic Asset Management, plans to rename the campus Tech Park @ Engage to match their other local campuses, Tech Park @ Ward, Tech Park @ Cremona, Tech Park @ Castilian, and Tech Park @ Hollister.” Those names are very 90s. You might was well call it the eTechPark.

••• And one more: the new owners of the Santa Barbara Public Market plan on turning the 3,900-square-foot building next door—28 W. Victoria, which they also bought—into an event space that can accommodate up to 200 people, according to a press release from Hayes Commercial Group.

••• If you like live music, you should definitely keep an eye on the new Ventura Music Hall. Upcoming concerts include X on May 11 and Weyes Blood on May 24. I only know Weyes Blood from her gorgeous turn on the third verse of Lana Del Rey’s recent cover of Joni Mitchell’s “For Free,” but I grew up loving X. You might still catch me screaming along to the Los Angeles album while driving around town.

••• A different kind of performance*: “Flamenco Intimo” at the Lobero on June 4: “‘Intimo’ is a Flamenco suite created by Siudy Garrido, award-winning composer and guitarist Jose Luis De la Paz and flutist Juan ‘Parrilla.’ Featuring acclaimed choreography work and flamenco solos by the company and Siudy Garrido, it explores a range of colors and emotions of traditional flamenco styles.” (*I could get into a flamenco version of “Johnny Hit and Run Pauline.”)

••• In October, I bought a $100 Apple gift card from Vons as a Christmas gift, and a month ago, I finally helped my parents redeem it—but it wouldn’t work. Apple said the card had been voided instead of activated and told me to contact Vons; Vons said the card was activated appropriately and told me to contact Apple. The story isn’t over, but the moral is clear: buying anything from a third party—including flights and hotels—can leave you caught in the middle when an issue comes up.

I wouldn’t call the Waterman a hotel, not even a motel. It’s a hostel and only got built because of that designation. No wonder they are calling for bids rather than putting a price on it.

Every July 4th, I think this will be 25 in a row, I get up and play X 4th of July. Something haunting and sad.