According to Dirt, the striking semicircular house at 900 Mission Canyon Road is owned by TV producer Jan DeWitt (“Bones”), who “worked with British architect Donald Hoppen, a student of Frank Lloyd Wright, to design and build the house in the early 1980s.” It’s an ode to wood: Besides the redwood exterior, “reclaimed and custom wood elements throughout the house include koa from Hawaii, madrone from Northern California, Honduran mahogany and, used for the floorboards on the second floor, reclaimed wood from the San Francisco pier.” According to Zillow, the property was listed for $4.5 million in October—then removed three days later. A glitch? 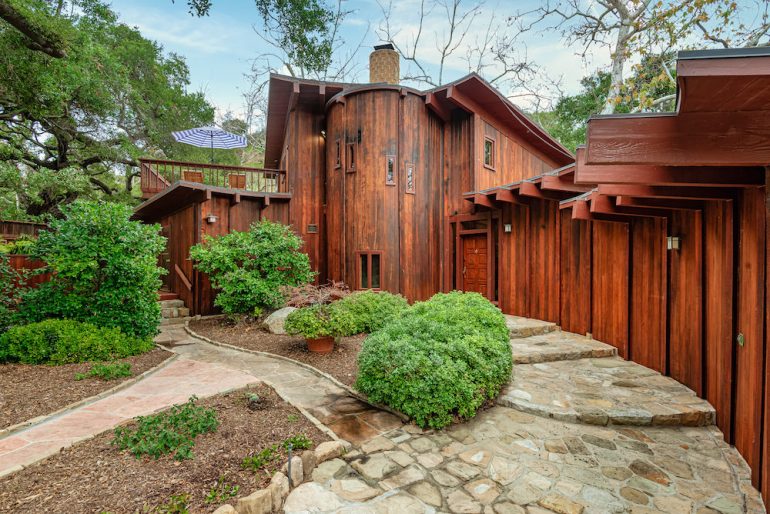 These floor plans help give the lay of the land. (The top one is the first floor.)

The living room is anchored by a stone fireplace, around which curves an open-tread staircase with a thick rope as the railing.

The wood theme continues in the kitchen, which has a dramatic view of an oak. Interestingly, the millwork in the pantry is more refined.

The master bedroom is upstairs, with a deck overlooking the backyard.

There’s a guest room on the ground floor of the main house, along with a bonus room.

Stepping out back…. I wonder how a different color deck would look. 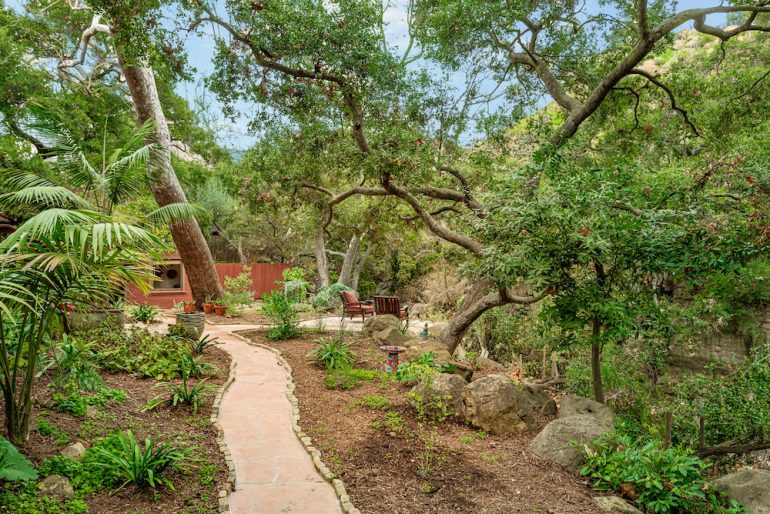 One of the outbuildings is a pleasant guest suite. Presumably, it includes a bathroom.

And the property and has a hot tub and a chicken coop—best not to mix the two.

Contact Hitchcock & Associates for a showing. Be sure to tell them Siteline sent you.

Recent Just Listed posts:
••• By the Architect of the Biltmore, Bellosguardo, and Lotusland
••• Double-Wide Beachfront Compound With a Midcentury Vibe
••• 7,500-Square-Foot Dollhouse in the Upper East
••• A World of Your Own in Montecito’s Hedgerow

Good luck in Santa Barbara from a 42 year resident of Montecito... Suggest you add ANTIQUES to your signage as people are asking What is… — Bill Tomicki

Low Pigeon knows what they're doing. Big moves for those guys this year! — Sarah Williams