Sea Ledge Lane has a magical feel to it: Heading west on Cliff Drive, you turn left, toward the ocean, just before you reach Hope Ranch. Eight of the nine houses on the private street are ideally situated—right above the beach, but away from busy Cliff Drive.

Before we enter, let’s take a moment to savor the location: 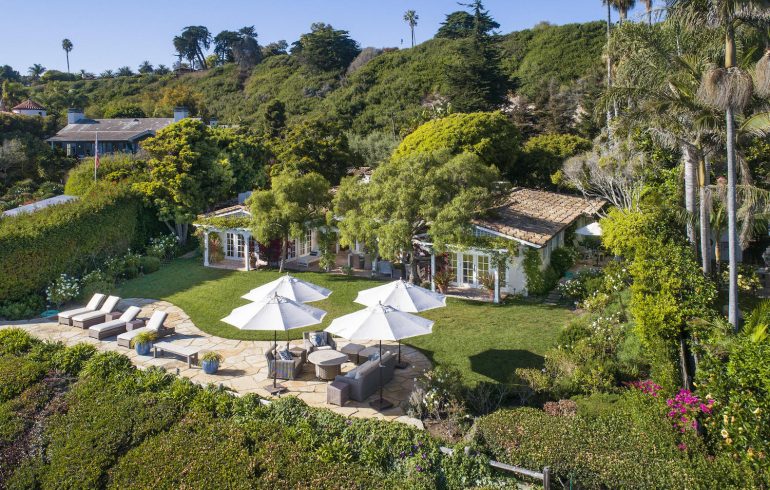 The property itself has a gate, in addition to the one at the top of the street.

Built in 1963, the house has a nice flow and charming bones. The rooms with pitched ceilings are more attractive, of course, although those ceilings are presumably why the house relies on a half dozen split-ductless HVAC systems for heating and cooling rather than a central system.

The kitchen gives a hint of how sharp the rest of the house could look if you painted the walls white and refreshed the furniture.

The master bedroom is spacious—with one heck of a view—and you have to love how the bathroom opens to a patio.

The other bedrooms don’t get the view, although they’re not small (and one is in a separate guest house).

The 1.1-acre lot includes plenty of established landscaping, along with that luscious oceanfront lawn. Water features usually exist to mask some unpleasant noise, but the one here is more about creating a nice view in a narrow side yard.

There’s also some fake grass by the guest house. Personally, I’d rather have a bocce court.

As with any oceanfront property, you have to worry about potential erosion and, should you want to make structural changes, dealing with the California Coastal Commission. Unlike 3429 Sea Ledge down the street—an adorable 1949 house with a history of unpermitted construction—3511 is said to have all its paperwork in order. For that reason, 3429 makes a difficult comp. It was first listed at $7.5 million, then cut four times till it was at $5.95 million. It does now have a pending offer….

Neither 3429 nor 3511 has stairs down to the beach, the way a few Sea Ledge properties do, but there’s a gated communal stairway at the end of the street.

LA is moving in .....and taken over carp and SB. Dom’s seafood 2🌟out of 10 Miramar -more Birkin bags than face masks Buying up real… — Quinn cooper

Your Interesting Choices is a riot ! Happy Siteline has such personality ! Totally dig it ! — Bruce Savin

When will the brick and mortar store open to the public? — Kimberly Ray

I’m sorry to see yet another business close. I have long thought 1309 State would make a killer apartment, though. — BW

A commenter on EdHat says they know the Karen and she’s actually mentally ill. I’m inclined to believe that. — BW